Spicy prices for our spices 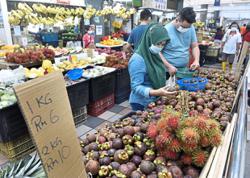 Feeling the heat: Shopkeepers selling spices are bracing themselves for another round of price hikes as errant traders abuse the Goods and Services Tax.

WHILE spice prices have risen by up to 40% in recent months, diners won’t have to dig deeper to pay for a meal– at least not for now.

The association has more than 3,200 members nationwide.

He notes that spice prices have risen through the years. Recently, his members have had to pay up to 40% more for common spices like cloves, cardamom, cinnamon and tumeric which are important ingredients in gravies and curries.

He feels that quality spices make a world of difference to the aroma and taste.

“It’s like driving a Kancil and a BMW,” he says.

“You can buy sub-standard spice powders loaded with artificial colouring and fragrance, but your business will definitely drop.”

As more than 50% of the ingredients used by nasi kandar outlets are imported from places like Iran, India, Myanmar and Indonesia, the operators are “suffering”.

“Customers blame outlet owners whenever there is a price hike but they don’t understand that our cost goes up several times a year.

“No one knows our sacrifice. We only charge more when we cannot bear to absorb the increases anymore,” he insists.

He, however, says that the softening currency is just one reason behind the exorbitant spice prices.

When shop owners confront their suppliers about why the bill is higher “every other month”, reasons range from soaring logistics costs and fuel prices to shortage of supply caused by the erratic weather.

“Unless we produce our own spices, we will be at the mercy of importers.

“Even my friends in the Chinese health and medicinal business are complaining about the impact of expensive spices,” he laments.

A check at a popular supermarket chain found that 1kg of cloves is now sold at RM80, cardamom at RM150 and bunga kantan (torch ginger flower) at RM4.

One shopper claims that she had difficulty trying to buy clove powder as most shops were out of stock due to a purported shortage. She finally found a grocer in the Klang Valley selling clove powder at a whopping RM272 per kg!

Admitting that some 75% of the spices have increased by an average of 35% since January because of the weak ringgit, Pasaraya Asokan operations manager M. Subramaniam, however, says per kg of clove powder should only cost RM60 – a RM8 hike from late last year.

“Of course, this depends on the grade of the spice and where it comes from,” he points out.

Clove, cardamom, almond and cashew nuts are among the pricier items, he says, adding that traders also have to incur a grinding fee when they send the spices to the millers.

Denying that the price hike was a result of a spice shortage, he says Malaysia imports most of the spices and hence, is vulnerable to economic changes.

“The main reason behind the hike is the weakening ringgit. That’s what’s pushing prices up,” he offers.

The outlet in Brickfields, which sells more than 70 types of spices, was recognised as a Fair Price Premises by the Domestic Trade, Cooperatives and Consumerism Ministry last year.

He says prices at his shop have increased between 10% and 15%.

Original Penang Kayu Nasi Kandar managing director Buruhan Mohamed, who runs a chain of outlets in the Klang Valley and Penang, spends about RM10,000 every three months on saffron alone.

“I can’t raise my prices everytime the cost of ingredients go up yet I cannot cut back on the ingredients because customers will notice.

“Omitting one spice from the recipe or reducing its quantity is not an option because the quality will go.”

In the last two months, S. Krishnakumar who runs Restoran Seetha Ram, has been forking out between 10% and 20% more for his spices.

“These spices are a must but we don’t use a lot. For curries, you need less than 10g of cardamom powder to cook 1kg of chicken.”

Despite rising costs, he will not increase his prices so as not to upset his regular customers.

“I get my spices from the wholesaler. I’m sure its much pricier at the shops.”

He is bracing himself for another round of price hikes as errant traders abuse the Goods and Services Tax.

Meanwhile, Peranakan chef Debbie Teoh is baffled why clove prices have increased tremendously despite the lack of fragrance.

In August last year, bunga kantan was selling between RM4.50 and RM5 per stalk due to a shortage during the Hari Raya period.

Other than for cooking, the bunga kantan is also popular in flower arrangements and there is even talk that the flower is now highly sought after by the perfume industry.

“The bud is tiny and not colourful at all. Also, the flower tends to turn bad pretty quickly so sellers up the price because they have to clear the stock before it goes bad.”

Most cooks end up skimping on spices as increasing food prices would cause customers to complain, she opines.

Teoh, however, says she is not about to compromise on the quality of her dishes.

“I tell customers my price. If they are not okay about it, that’s fine. I don’t want to kill our heritage food by preparing something that is not authentic,” she insists.

Amy Chan, who has been selling Penang assam laksa at her cafe in Petaling Jaya for 16 years, describes the price hike as “crazy”.

“Three stalks of bunga kantan used to be RM2 at the wet market. You can’t get that kind of price anymore, not even in a kampung,” she complains.

Bunga kantan, she says, is a “must have” ingredient for assam laksa.

She uses 10 stalks per day.

When she balked at the steep price, Chan claims she was told off.

“Blaming a shortage, my supplier said there were many other buyers willing to pay the price if I did not want to. What can I do? I need bunga kantan for laksa soup. It’s not just the garnishing.”

“Herbs like the bunga kantan need lots of water. Even last year, prices were high because we didn’t have much rain.

“When the ground is hard and dry, the bunga kantan will not grow well,” she says, adding that when it’s the wet season, per stalk of bunga kantan is only between 50 sen and 80 sen at wet markets.

During the hot season, prices range from RM1.80 to RM3.50, Nazlina, who started the blog Pickles and Spices on the use of spices in traditional Malay food, says.

The cook runs the Nazlina Spice Station in Penang and was featured on the BBC Good Food channel teaching celebrity Michelin Star chef Atul Kocchar how to make nasi lemak.