Preliminary report to be out within a month

Recovery mission: Police officers placing part of the wrecked helicopter into the truck.

BENTONG: The preliminary report into the Dauphin 2 helicopter crash which killed Tan Sri Dr Jamaluddin Jarjis and five others is expected to be ready within a month after the analysis of the black box is done in Britain, says Transport Minister Datuk Seri Liow Tiong Lai (pic). 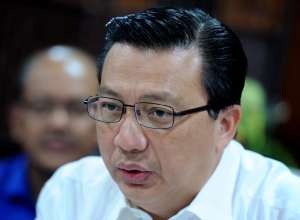 “It will take about three to four days to retrieve the data and then another one week to analyse it,” he told a press conference after attending the official opening of a seminar on halia (ginger plant) Bentong and the presentation of a certificate of the geographical indices of the plant here yesterday.

He said an investigating team from his ministry, the police, Department of Civil Aviation as well as the Fire and Rescue Department were still gathering clues at the scene of the crash.

Liow asked the people to stop speculating about the incident, saying that such talk would not help in finding out the cause.

“Please respect the feelings of the victims’ families,” he said.

In Semenyih, Selangor police chief Senior Deputy Comm Datuk Abdul Samah Mat said the pieces of the helicopter wreckage would be retrieved once investigators complete their probe into the cause of the incident.

The helicopter parts would be brought to the Police Air Wing hangar in Sungai Besi, Kuala Lumpur.

He added that the debris removal work would commence once the Air Accidents Investigation Branch (AAIB) completed its investigations.

“We do not want to disturb the crash site as the placement of the aircraft parts can indicate what had happened to it.

“Once the AAIB gives us the OK, we will start removing the larger components,” he told reporters at the crash site command centre yesterday.

SDCP Abdul Samah said police were discussing the best way to remove the parts as the wreckage was located in a section of jungle which has no road access.

“Smaller parts can be removed by pickup trucks, but a bigger vehicle is needed to remove the larger components,” he added.

Transport Ministry secretary-ge­neral Datuk Dr Ismail Bakar said helicopters from the police, the RMAF or the Fire and Rescue Department might be used to take the large wreckage pieces out of the crash site.