Teachers do better in test

KUALA LUMPUR: The quality of English teachers has improved, with 76% of 5,000 teachers who sat for the Cambridge Placement Test (CPT) in the first batch moving up a band, says Second Education Minister Datuk Seri Idris Jusoh.

He said that another 10% had improved by two bands.

“About 9,500 teachers are currently undergoing training for the CPT. The next batch will consist of another 8,000 teachers,” he said after witnessing the Memorandum of Agreement signing ceremony between Universiti Teknologi Petronas (UTP) and University of Cambridge Admission Testing Service.

The CPT was first carried out in 2012 with around 61,000 English teachers being gauged on their English language proficiency.

The test results found that only 30% of English teachers were deemed to have a high mastery of the language while the remaining teachers either had some or low English proficiency.

Idris said the ministry would train more than 23,000 teachers by December to ensure the quality of English in schools would improve.

“Immediate results should not be expected from this training programme as the teachers in turn have to tutor the students.

“It might take one to two years to see this (improvement in the students’ English language proficiency), but I can assure you that what is happening now is something that has never happened before in Malaysia,” he added.

He also said English teachers would now have to attain a C1 or C2 in CPT before being allowed to teach the language. These grades, Idris said, were equivalent to the requirements for their teaching counterparts in Britain.

“Some people say that for Malaysia, (a grade of) B2 is good enough,” he said, adding that the ministry would stick to Britain’s standards of teaching the language in order to enhance the quality of teaching English in Malaysia.

On another matter, Idris said the Malaysian Examinations Syndicate director Dr Na’imah Ishak and deputy director of operations Dr Wan Ilias Wan Salleh, who were suspended over the leaks in last year’s Ujian Pencapaian Sekolah Rendah (UPSR), had been cleared of any wrongdoing.

“They have been re-assigned and are now handling different portfolios,” he added.

The leaks affected more than 460,000 Year Six pupils who had to resit the Mathematics, Science, English and Tamil language papers. 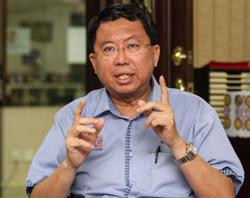