By YU JI, ANDY CHUA and STEPHEN THEN

Broken Earth: A section of road at the Puncak Borneo area destroyed by heavy rain. The road, about 40km from Kuching, leads to Kampung Abang.

KUCHING: There was a brief respite for flood evacuees in the state after the rain stopped at around noon, allowing the closure of three relief centres.

However, when high tide came at 4pm yesterday, the waters rose again, causing the number of evacuees to climb to 5,178 — the highest since shelters opened on Sunday evening.

At 5pm, two stations along Sara­wak River showed readings above the danger level while three others were at the warning level.

According to the National Security Council, 34 shelters were opened across Sarawak by evening, of which 19 were in the Kuching division, serving 2,677 evacuees.

Deputy Chief Minister Tan Sri Alfred Jabu Numpang said the Kuching Barrage would close and open according to the tide level, pointing out that flood gates at the Sarawak River mouth could “quite effectively” control the inflow and outflow of water.

During high tide, the Kuching Barrage would close and only open if swift currents from upstream push up the water level.

Jabu, who is state disaster relief committee chairman, said he did not expect the flood situation to worsen as long as it did not rain continuously like it did over the weekend. 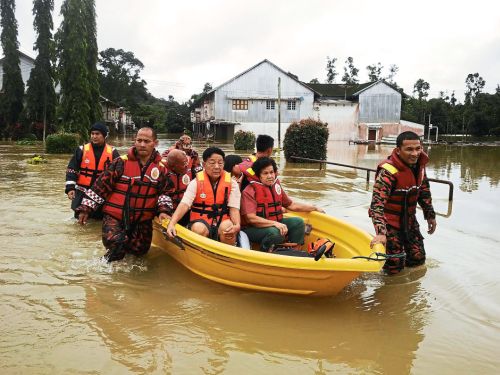 To higher ground: Fire and Rescue Department workers helping stranded people to evacuate their flooded homes at Tondong town in Bau, about 30km from Kuching.

Starting today until Sunday, tides are likely to be even higher.

Today, high tide is estimated at 6m around 5pm.The Drainage and Irrigation De­­part­­ment is forecasting the “king tide” to hit 6.3m on Thursday and Friday between 6.30pm and 7.30pm.

In Mukah, the body of a 17-year old girl, who went missing on Sunday when a longboat she was travelling on with four others capsized in Sungai Mukah, has been found.

Mukah Fire and Rescue Depart­ment chief Alimat Sam said the body of Atikah Rosli was found by a fisherman at 8.05am yesterday about 7km from where the boat overturned due to strong waves.

In Miri, some 10 settlements in various parts of the middle basin of Ulu Baram in northern Sarawak have been cut off from the outside world as floodwaters reached remote areas of the state. Contemplating: A senior citizen sits staring into space at the SK St Peter shelter near Simpok about 30km from Kuching. — Bernama

As at press time yesterday, parts of the Mulu National Park were flooded following a day of incessant rain.

Telang Usan assemblyman Dennis Ngau said the latest round of floods in Baram was more severe than the first one about two weeks ago.

“This time, more settlements are flooded, with the water level at some places more than a metre high,” he said.