Piles of coal at the mine in Selantik, Pantu, about 130km from Kuching.

MIRI: Disciplined, dedicated and tough - that is why North Koreans are hired to work in Sarawak’s coal mines.

Deputy Home Minister Datuk Seri Wan Junaidi Tuanku Jaafar said the North Koreans were brought into Sarawak to work via a special arrangement between the Sarawak and North Korean governments.

“Only Sarawak has North Korean workers (in Malaysia). This is not (allowed) in the peninsular,’’ he said when commenting on the presence of dozens of North Koreans at a coal mine in the Sri Aman division.

Wan Junaidi, who is the Santubong MP, said it was the right of Sarawak to hire the North Koreans because “the state government has autonomy on immigration and labour matters.”

“When it comes to industries such as coal-mines, the jobs are very dangerous and tough. The mines can extend hundreds of metres below.

“No local or Sarawakian will dare to take up such jobs; that is why the need for foreign workers. In the coal-mining sector, only Britain, China and North Korea have highly-skilled workers,’’ Wan Junaidi pointed out.

Backing Sarawak’s decision to hire the North Koreans, he said there was no record of crimes involving them in the state.

On Saturday’s explosion at the mine, Wan Junaidi said checks showed that all the foreign workers had valid work permits.

“The entry of these workers were handled by the Malaysian Immigration Department and their work permits were issued by the Sarawak Labour Department,” he added.

Wan Junaidi said the Malaysian Government had no issue with nationalities from different ideologies working in the country as long as they “have working permits, do their jobs and not spread their ideology”.

“There are many people from communist countries working in our country and having businesses here,” he said. “All we require is that they come here legally, work legally and stay free of trouble with our laws.”

Number of injured workers rises to 30

Mine sealed due to gas and flood 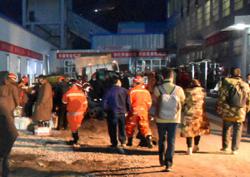