By RAZAK AHMAD AT THE 25th ASEAN SUMMIT

Standing united: Najib (fifth from right) posing for photographs with Thein Sein (centre) and other Asean leaders during the closing of the 25th Asean Summit at the Myanmar International Convention Centre.

NAYPYITAW: Malaysia has assumed the 2015 chairmanship of Asean, pledging to steer the 47-year-old regional grouping towards an integrated and people-centred Asean Community.

The handing-over ceremony took place at the cavernous Jade Hall of the Myanmar International Convention Centre.

With the leaders of the member countries and their spouses in attendance, Myanmar president Thein Sein handed over a ceremonial chairman’s gavel to Prime Minister Datuk Seri Najib Tun Razak to mark the handing of the chairmanship to Malaysia at the close of the 25th Asean Summit here.

Najib then delivered his remarks, followed by a video presentation on Malaysia’s progress and development. The logo for Malaysia’s chairmanship was also unveiled during the presentation.

He outlined Malaysia’s vision for the bloc, which he described as united, stable and prosperous.

“As the chair, we will continue to work to achieve that vision and the programme of work outlined for the years ahead. 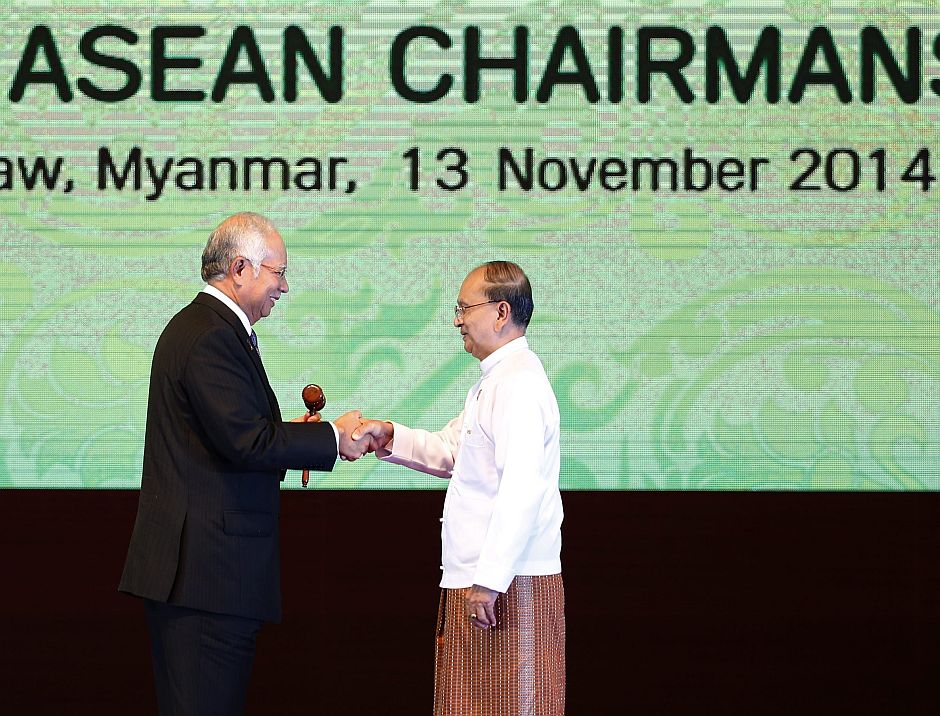 Over to you Myanmar President Thein Sein handing the gavel, the symbol of chair nation of Asean, to Najib as they shake hands, indicating the handover to 2015 host Malaysia, at the Myanmar International Convention Centre in Naypyitaw. — EPA

“Malaysia’s job next year is to make Asean as close as possible to the people,” he said, adding that Asean needed a more effective communications plan to create awareness among the people.

Malaysia will take over the annual rotating chairmanship of Asean beginning Jan 1 from Myanmar amid high expectations.

The regional grouping is hoping that next year will see the emergence of the Asean Community under which member countries will become more closely linked in terms of economy, political security and socio-cultural pillars.

The Asean Economic Community, which aims to create a single market and production base, is scheduled to be rolled out at the end of next year.

This also involves the reduction or elimination of tariffs, progressive liberalisation and removal of barriers to trade and services, much of which have already been accomplished.

Najib said Malaysia planned to lead Asean to achieve these goals next year.

“We are conscious that the formation of the Asean Community will happen on our watch, and we will work tirelessly towards that ambition,” he said.

As Asean chair, Malaysia will also help to develop the region’s 10-year post-integration plan that will guide Asean’s continued growth from 2016 to 2025.

“We will devote our efforts to developing the Asean Community’s Post-2015 Vision, as a guide for the community to further prosper and grow,” he added.

Najib commended Myanmar for its chairmanship of Asean this year and paid tribute to Asean’s founders whose vision to set up an association for development, stability and growth led the grouping to become what it is today – the seventh largest economy in the world.

However, Najib said that while it was important to drive Asean’s continued economic growth, the fruits of development should be felt by the people and touch their lives.

“We hope to steer Asean closer to the people of South-East Asia: to make this institution part of their daily lives by creating a people-centred Asean,” he said, referring to Malaysia’s theme for Asean during its chairmanship.

Najib said Malaysia, as chairman, would also promote moderation as a shared value, in order to address conflict and find solutions to issues concerning regional peace and security.