Food, the secret to a united Malaysia

Celebrity Chef Wan talks to Sunday Star about food and race polarisation, his love-hate relationship with the social media, fatherhood and wanting as many grandchildren as possible.

KNOWN to foodies the world over as Chef Wan, Datuk Redzuawan Ismail believes that food can unite Malaysians.

And, he does not mince his words when he chides “extremists” for tearing the nation apart, fighting over everything, including food.

The 56-year-old grandfather throws his hands up in exasperation, shocked that some people had suggested blood transfusion for Muslims to cleanse themselves after the recent fiasco where porcine DNA was allegedly found in some batches of Cadbury (the Malaysian Islamic Development Department has since confirmed that Cadbury is halal).

Chef Wan, who has six siblings, shares how his Peranakan Chinese grandmother was always respectful of his family, even having separate cutlery and plates for them whenever they visited. Thus, he does not get why Malaysians today cannot respect each other’s religious beliefs and culture.

He calls on the people to unite over food instead of fighting over it. Cooking with gusto: Chef Wan demonstrating how to cook a laksa dish at the launch of his latest book ‘400 Resipi Terbaik Chef Wan’.

> You believe food unites but a proposal to patent the assam pedas Melaka, a former minister’s declaration that Malaysian food had been hijacked by other countries and the recent Cadbury fiasco appear to have shown otherwise.

Any food, so long as it is halal and does not offend any religious sensitivities, can unite.

All religions encourage people to eat together to foster closeness. It is stupid to fight over food.

God brings food into the world to unite people and for us to be happy and healthy.

We should feel blessed instead of trying to own everything and judge everyone.

All this blood cleansing is stupid. (Religious) extremists are poisoning people’s minds. This country is not just for Muslims. 1Malaysia means it is for everybody.

We bang the gong and tell the world we are multi-cultural but then we do something that is completely opposite. It’s a free world. You cannot impose your belief on others because then you will create a society that judges.

In every civilisation, religious houses are built and then destroyed but we have not learnt anything from history. We are still on a path of destruction. I don’t judge people by the colour of their skin and I don’t care if you are gay or straight.

The world is in a mess because people don’t respect each other anymore. I don’t like what we have become.

> In January, you slammed Malaysia Airlines for their ‘naked nasi lemak’ served with only half a hard-boiled egg and some sambal to accompany the rice. Has the dish improved?

Now they are giving peanuts and all that. I understand they are cutting cost but it’s sad that we have fallen to this level.

In the old days, MAS used to be up there but a lot of people are choosing to fly other airlines now because of the huge difference in food and service.

I don’t want to stick my nose in the aviation business but we must take pride in our heritage food and do it properly.

What disappointed me was how the same cabin crew who passed me the comment form later sided with MAS and scolded me macam-macam. Such hypocrisy!

I don’t like people who twist and turn. I have sacrificed so much to promote Malaysia. It is very hurtful when people don’t see that and instead want my Datukship to be revoked because of what happened. But ada aku kisah (do I care)? I was born Chef Wan without a title, and I’m happy to die that way. I cannot spend my life worrying about what people think.

> You posted a photo of yourself on Instagram, holding a door-like object linked to the MH370 search operations. Are you picking on MAS?

Not at all. Last month on a trip to Penang, my luggage got stuck at the baggage claim area. There was no one to help so I crawled to pull out all the bags for the other passengers. I could have made a story of it but I didn’t.

That post (the door-like object) was a joke taken out of context. Perhaps the timing was not right but I was trying to show how people love dwelling on things and spreading it (on social media) like maggots.

(MH370 flight attendant) Mohd Hazrin Mohamed Hasnan (who had posted an Instagram photo with Chef Wan on a flight to Dubai, joking about nasi lemak: “@chefwan58 jom makan nasi lemak.. heheheh.. anyway it’s being a pleasure serving u onboard flight to dxb.”) is a friend. I know a few of them (on MH370) ... of course I feel sad. If there is no compassion in me, I won’t be where I am today.

> You have a love-hate relationship with social media. Why?

I deleted my Facebook fan page after haters criticised me for taking (my three-year-old grandson) Tristan to a Christmas party. That was the last straw. I started an Instagram account (chefwan58) because it was unfair to let these people ruin things for my fans. It’s very easy to block and remove people on Instagram. If I don’t see your real face – you’re out, no exceptions. If I see a profile picture of a cat, an artistically cropped face or a baby photo, I delete. If you want to talk to me, I must see your face.

> Your latest cooking show East Bites West with Chef Wan took you around the United Kingdom to showcase the best of Asian dishes. You impressed the Brits and even had a German nurse proposing marriage. How did you let her down?

I joked that I had menopaused twice already.

> East Bites West with Chef Wan includes a “Bite Challenge” where the public determines whether the local dish or yours tastes better. How did Malaysian food fare?

I won 12 out of 13 challenges. The only one I lost was the Fish and Chips versus the Thai fish cake challenge. This shows that even the most conservative Englishman in the countryside accepts our food.

Masterchef is not ‘master’ enough for me. Not that I want to put her down. Good that Malaysia won but MasterChef to me is more of a reality show. Just because you can cook something, you are glorified. Many housewives here can cook. Just go for a few cooking classes, you can make all those things, too. People go through years of training to become a master. Even I don’t dare give myself that title.

> Are you a chef or a celebrity first?

Even as an ‘anak Felda’ helping my mother sell kuih in Raub, Pahang, I was already a village celebrity. Everyone loved me and wanted to marry off their daughters to me because I was very hardworking. So celebrity and chef are the same to me.

> After your divorce at age 27, you left your accounting job for the United States to become a chef. Your children Mohd Nadzri (Chef Riz) and Serina remained with their mother in Malaysia. Are you a better grandfather than you are a father?

Even when I was abroad, I came back often. I was here when my children started Form One and spent a lot of time with them. Maybe what I was unable to do for them, I am making up for with my grandchildren, Tristan Tareef, three, and Isabella Suffiyah, two. I don’t want to miss the wonderful moments of them growing up. I would be lying if I said I don’t spoil them. They get away with murder. I work hard and want to share my success with the family. I love children. I want as many grandchildren as possible.

> You have a good relationship with your ex-wife?

I used to sell cosmetics and was surrounded by women. We broke up because of jealousy, not because I was cheating on her. She sacrificed a lot and is the best mum to my children. I still take care of all her needs. She lives nearby and we even share a driver.

> What are your children up to?

Nadzri’s restaurant Flavours is doing very well and Serina’s busy with a million things. She’s expanding her many businesses, including a production house, pharmacy and restaurant. Their cooking skills are not yet at my level but they are trying hard. When Serina opened her restaurant, she wanted to learn the hard way. I’m so happy for her because my son-in-law, Gavin O’Luanaigh, is a responsible guy who understands and accepts Serina for who she is.

> You blew your top at Chef Riz publicly once for overstating his qualifications in MasterChef Malaysia. Is fatherhood tough?

Everyone makes mistakes, not only my kids. We all have weaknesses. Just correct it and move on. It is not easy being a father. We teach our children as best we can but there’s only so much we can do. If they do something behind our backs, how would we know? It’s not fair to always blame the parents.

Sometimes I feel guilty for working so much but being a public figure is not easy. All I want is for them to be responsible adults. I’m lucky because they never ask me for anything.

> What are your three top cooking tips?

Serve quality food. Passion is important – if you are sad, don’t cook. Present food in a colourful manner and take pride in creating a nice ambience.

My latest obsession is getting my new house in Cyberjaya done. My restaurant will also be opening there in November. I’ll take a break for Ramadan before heading to Lebanon and Norway to film Astro’s Kembara Selera. There are plans for East Bites West with Chef Wan in Europe and America. I also want to do a Malaysian heritage cuisine show where I go around the country in a caravan, visiting the local markets.

> Have you spotted any potential successors?

Those who can cook lack personality and don’t speak English well. Those who do can’t really cook but they look good. But if you are hardworking, you will make it no matter what race you are. 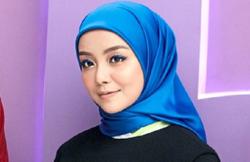 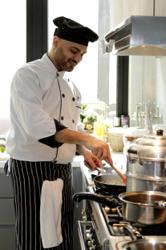 Personal chefs are gaining popularity in Malaysia with high-end diners