KUALA LUMPUR: Thursday's rally against the imposition of the Goods and Services Tax (GST) ended peacefully at about 6pm with no untoward incidents reported between the police and protesters.

Earlier, protesters flooded Jalan Raja in the anti-GST rally, which began at four locations in the capital city at about 9.30am - KLCC, Sogo, Dataran Maybank and Masjid Negara.

The gatherings picked up closer to noon with the bulk of demonstrators arriving in large numbers at the four meeting points at 11.30am to the rallying cries of ceramahs, such as those given by Himpunan Hijau chairman Wong Tack, former Bar Council president Datuk Ambiga Sreenevasan, and Parti Sosialis Malaysia secretary-general S. Arutchelvan.

He urged demonstrators not to enter Dataran Merdeka, the original gathering point for the anti-GST rally.

"Please do not enter Dataran Merdeka as it is closed for renovation. Please remain on Jalan Raja," he said. A change of weather at 3.45pm, with signs of impending rain, darkening skies and the loud rumbling of thunder did not deter the majority of demonstrators, although some were seen leaving the Jalan Raja area in front of the Sultan Abdul Samad building.

This prompted Mohamad Sabu to go up on stage where he urged the crowd to remain where they were even if it rains.

He called on the demonstrators to wait for Opposition Leader Datuk Seri Anwar Ibrahim to speak, as "it may be the last time we can hear his speech".

"We feel so hot, so the rain will cool us down," he added.

Azmin warned that there would be another huge rally against the sodomy conviction of Anwar.

Anwar has appealed against his five-year jail term imposed by the Court of Appeal on March 7.

A scuffle at the rally was reported at about 4.05pm - between a group of Solidariti Anak Muda Malaysia (SAMM) members and Unit Amal officers on Jalan Raja, near Panggung Bandaraya.

PAS Unit Amal members could be seen trying to hold the line while the crowd pushed forward, throwing water bottles and engaging in a brawl with members of Jingga 13, who tried to calm them down. 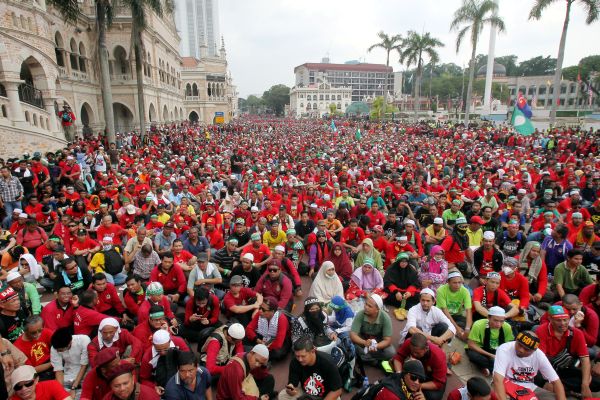 However, tempers came under control by the time demonstrators gathered along Jalan Raja to listen to speeches on the makeshift stage - such as the one given by PAS central committee member Dzulkifli Ahmad.

"With the GST, the government can earn RM20bil, where will this come from?" he told the crowd at 4.10pm.

Organisers then announced the rally over at 5.15pm.

SAMM coordinator Badrul Hisham Shaharin, popularly known as Chegubard, then apologised on behalf of those involved in the brawl, and said he would look into the matter.

However, he said those wearing SAMM T-shirts might not necessarily be from the group as it could be bought anywhere and acknowledged that a group of people dressed in SAMM uniforms entered Jalan Raja at around 4pm in a plume of orange smoke from a gas canister.

PSM deputy chairman M. Sarasvathy told The Star that the turnout for the rally was "fantastic".

She said this was the first time Malaysians had come out in large numbers to celebrate International Workers' Day, May 1, and that the crowd, which had gathered at several locations around the capital city dressed in red, showed the people's opposition to the imposition of GST, which will be implemented in April 2015.

A participant at the rally hoped the government would consider their pleas.

"The response is encouraging. I hope that the government will consider our views," she said.

Kuala Terengganu MP Datuk Raja Kamarul Bahrin Shah Raja Ahmad who was present in support of the demonstrators said the gathering would be effective in sending a strong message to the government that the people were against the GST.