Cops nab one of three robbers 30 minutes after crime

TANAH MERAH: The police arrested a 51-year-old man and seized an M16 rifle just 30 minutes after he and two others had robbed a convenience store here last night.

They also seized an M16 magazine, a machete, a sickle and a penknife from a car the robbers had used during the robbery at 8.15 pm, said Kelantan Deputy CPO Datuk Mazlan Lazim.

The police had caught up with the robbers as they were having a drink at a restaurant about two kilometres from the convenience store, he said, adding that they started to run away upon seeing the police.

"We managed to catch one of them after a struggle and firing a warning shot into the air. The two others fled into some undergrowth," he told reporters on Tuesday.

Mazlan said the police recovered all the weapons from the car and were on the hunt for the fugitives.

He said the trio, wearing masks, had held up an employee of the convenience store after firing a shot at a refrigerator.

"They ordered the employee to open the cash register and scooped up RM300 and fled," he said, adding that the arrested man was a Malaysian. - Bernama 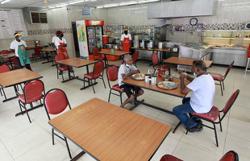 Restaurants, convenience stores in Selangor allowed to operate until 2am