Other side of foreign faces Eye-opening pictures: Some of the photographers behind the enlightening exhibition (from left) Ruffey Rahman, Sam, Anne and Zarith Zulkifli.

The Migration Works campaign aims to show young people that we share more with migrant workers than we think.

FREELANCE photographer Sam Ruslan never bothered to really look at the foreign faces serving him coffee, until he found himself behind the coffee bar.

“Working closely with foreign workers as baristas made me see them in another light,” he shares. “I was shy and awkward, but they were so friendly and helpful. We ate together, joked and laughed. I started to see them as real people, like you and I.”

His other discovery opened his eyes wider.

“While it is true that many work here to earn money, it is not just to survive. They want better lives too for their families and children,” says Sam.

“For one of my Filipino colleagues, Ben, barista work is actually his dream. He loves coffee and he is good at what he does. Migrant workers are like us, they have hopes and dreams too.”

Inspired by Ben, Sam started taking portraits of his migrant co-workers, two of which he exhibited at a recent photo exhibition organised by the International Labour Organisation (ILO) to commemorate the International Migrants Day.

Anne Muhammad, another young photographer invited to participate in the exhibition at mapKL@Publika, Solaris Dutamas, says she has also gained better understanding of migrants workers the closer she tried to get to them.

To her surprise, she found many shared similarities, which drew the fresh graduate to capture more photos of their lives.

“It started just as a job assignment when I was asked by Tempo Jakarta to take photos of Indonesian migrant workers. But in my search, I got to know the workers and their experiences, how they miss their families and homes,” she says. Anne was heartened that an Indonesian family even invited her into their home, giving her the chance to get to know the whole family. The experience opened her to a new view of the migrant worker community.

“I was touched by their common concerns and feelings, and I now find the negative attitudes of the average Malaysian towards migrant workers very distressing.”

The exhibition is one of many programmes planned by ILO in its campaign Migration Works to promote a positive attitude towards migrant workers in Malaysia.

In Malaysia, the study found that only 38% of respondents felt migrants make a net contribution to the economy. While the labour laws provide equal protection, 73% of respondents felt that authorised migrant workers cannot expect the same wages and working conditions as their local counterparts. This is reflected on the ground, where many migrant workers receive low pay and are mistreated at work.

Under the GMS Triangle project, ILO has been working with the authorities, employers and other stakeholders to strengthen the formulation and implementation of labour recruitment and labour protection policies and practices in Malaysia. As the survey shows, however, raising people’s awareness on the contributions and positive roles of migrant workers is also as important.

And as the advocacy creed goes, nothing is more effective in changing mindset than starting it young.

Volunteering to take the helm of the mammoth task is academic Chan Tsu Chong, who believes that a major obstacle is migrant workers’ growing “invisibility”.

“In the past few months we have been going around colleges to talk to students about the issue.

“Migrant workers have become such a big part of our landscape that we don’t even see them, much less are aware of the important role they play in society,” says Chan, relating his experience at one of their first workshops with college students.

“So our task is also to get the young people to notice the migrant workers as people and not just faceless service.”

Says GMS Triangle national project coordinator Anni Santhiago, “The perception is that migrants are the cause of crime, bringers of disease and many other social ills. They are also seen as a threat to the country’s culture and heritage. Yet, official statistics do not substantiate these claims.”

“We want people to perceive the migrant as a person who has rights and dignity. But first you have to see them as workers with a lot to contribute.”

What many have forgotten is that migrant workers play a vital role in our society, she adds.

“Evidence points to the fact that without them, Malaysia would have not been able to achieve its economic and development aspirations. Migrant workers currently make up 30% of our workforce and fill the gaps in all major sectors.”

Malaysia is not the only country relying on foreign workers, migrant work is now a global phenomenon. This year, some 232 million migrant workers aged 20 to 64 were recorded in the world. In Malaysia, the number of migrant workers has reached four million, filling the labour needs of various sectors including restaurants, plantations, construction sites and homes.

To date, the response to their workshops has been encouraging, says Chan.

“In the beginning, many had negative impressions of a migrant like scary, criminals and lazy. We are happy to say that by the end of the workshops, we managed to break some of these misconceptions. Or, at the very least, get them to recognise that migration is a complex issue and not be too quick to judge migrants based on their origins, but instead to respect them as human beings.”

A major reason for the prevailing misunderstanding and prejudice towards migrant workers is the lack of information, specifically positive information, Chan opines.

“Many only hear the scary stories or read and see the negative news about migrant workers. They don’t have the real facts,” Chan notes.

Student Anisa A, for one, admits that she would trust her Indonesian Bibik with her life, but it’s a totally different story when it comes to other foreign workers. She prefers to keep her distance from them.

“I can’t help myself,” she admits with an embarrassed laugh.

“My Bibik is like family, but when I see an Indonesian or Bangladeshi worker on the road, I’ll cross to the other side or hold on tight to my handbag because of all the news I read and hear.”

Anisa is not alone in her perception – it is shared by many others.

The Migration Works try to get them to dispel their negative notions by getting them up-close with a migrant worker in the workshops and hear for themselves the challenges and problems migrants face in Malaysia.

And as student Elvin Ng, 19, discovered after getting to know his foreign co-workers at a café, they are vulnerable to street crime too.

“One from a café I worked at told me when he first came to Malaysia, he and a few friends were mugged at their apartment by locals.”

Brickfields Asia College student Tan Kar Can, 20, agrees it is unfair to put all the blame of crime on migrant workers. “Social problems and crime in our country are mostly committed by the locals, migrant workers contribute to a smaller number of crimes. This could possibly be due to the lack of jobs for the locals and more jobs for migrant workers. Most low income jobs are taken up by migrant workers because locals don’t want to do them. So, there are those who have no choice but to resort to robbery and theft.”

Ultimately, the recent photo exhibition project was an attempt to give the public diverse peeks into the world of migrant workers.

For more details of Migration Works or to sign up for the campaign and view the photo exhibition, go to https://www.facebook.com/MigrationWorks

Related story:
Unfair to paint them all with a negative brush 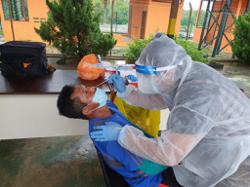