Johor to have Friday, Saturday weekend rest days from Jan 1

MUAR: Johor's Sultan Ibrahim Ibni Almarhum Sultan Iskandar has declared the change of the state's rest days to Friday and Saturday instead of Saturday and Sunday from next year.

The much-anticipated decision was announced during the investiture ceremony on Saturday in conjunction with his 55th birthday.

In his speech at the event held at Dewan Jubli Intan Sultan Ibrahim in the royal town, the Sultan said that  the change of weekend would take effect from Jan 1, 2014.

He said the decision to change the weekend holidays was made after receiving feedback from various quarters and to allow Muslims to preform their religious obligations on Friday in a more peaceful manner.

Speculation has been rife about the change after a state government document was leaked on the Internet.

Presently, states such as Kedah, Kelantan, and Terengganu have Friday and Saturday as their off days.


Prior to 1994, Johor had Friday and Saturday as non-working days. Explainer: What's in the law protecting internet companies - and can Trump change it? 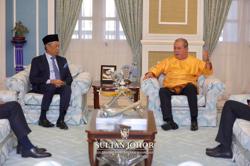