KUALA LUMPUR: The Sri Muneswarar Kaliayaman temple off Jalan P Ramlee was further demolished Sunday morning despite a meeting pending with the deputy minister of the Federal Territories Ministry later this month.

Temple president R.A. Balasubramaniam said the officers from Kuala Lumpur City Hall (DBKL) along with several policemen came to the temple as early as 7.30am.

"They made those inside leave without any explanation and proceeded to demolish the temple," he said.

"Nobody will talk to us and they have not allowed us to go inside to salvage what we can. No notice has been served," he said.

By 12.30pm, all structures around the prayer hall had been torn down and removed. Only the hall and a shrine, one of two shrines at the temple, have yet to be demolished.

It is learnt that the hall and shrine would not be removed as they conformed to DBKL plans, which include the building of a walkway by a developer of a 30-storey building adjacent to the temple. 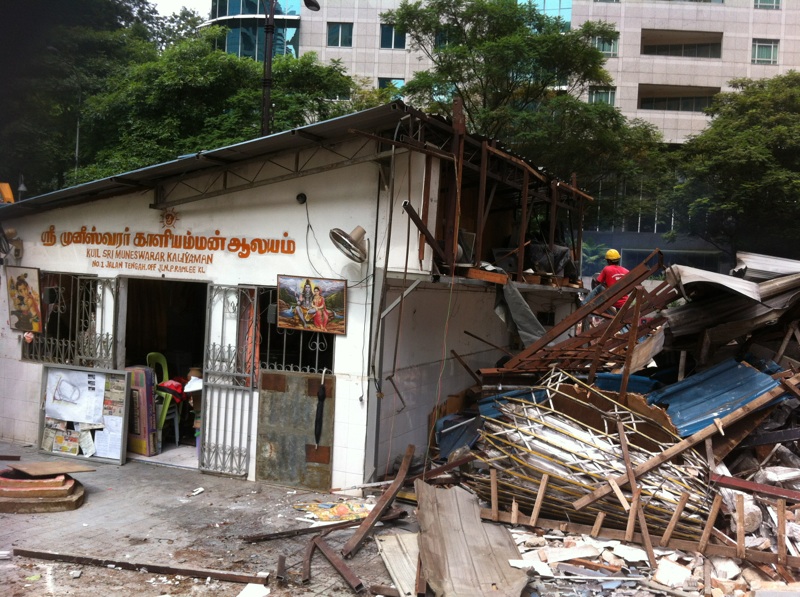 The building that is also the prayer hall waiting to be demolished. Picture by DINA MURAD

Earlier, tractors were seen tearing down all structures and the roof of the prayer hall that "should not be there."

City Hall officers were seen collecting household items and putting them at the side to be handed over to the temple committee.

A reporter from AFP was heard saying that City Hall officers came as early as 7am and went straight away about their jobs.

By 11.45am, only the prayer hall and the shrine were left untouched.

Quarters for the temple's priests, wash rooms and meeting rooms have all been torn down. 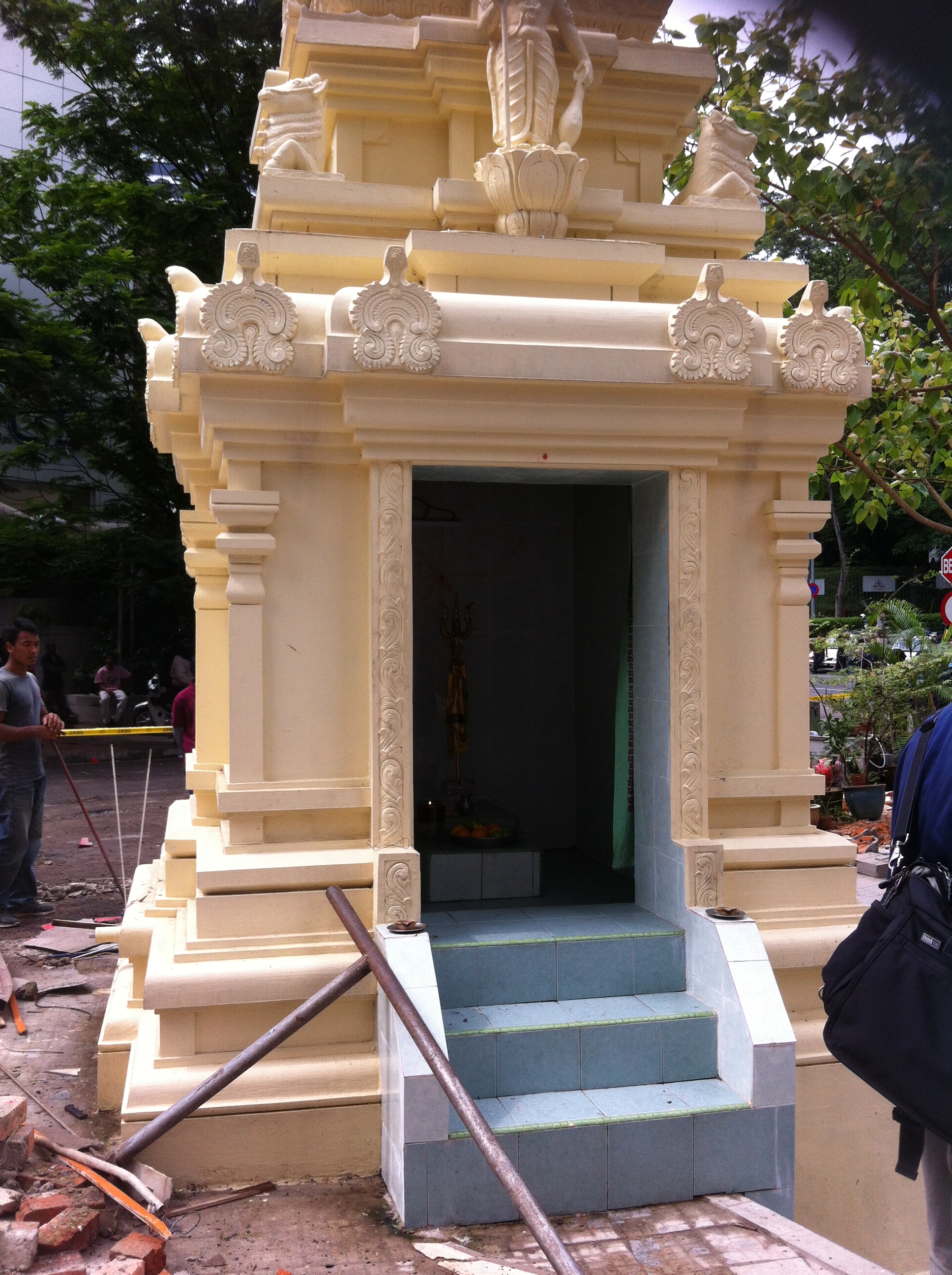 The main shrine, one of two in the temple, waiting to be demolished. Starpix by DINA MURAD

Temple secretary W M Nalini said the temple's kitchen where statues that had been salvaged from an earlier demolition raid were kept had also been demolished. She is unsure as to the condition of the statues.

She said no notice and order were received as to today's demolition.

Someone in the crowd criticised Federal Territories deputy minister Datuk Logabalan for allowing City Hall to carry out the demolition today.

MIC Youth's head of social and welfare bureau Arvind Krishnan urged the party to send a motion to debate the issue in Parliament.

He said the wing would "go all out to seek justice." "We want the temple to be rebuilt," he added. 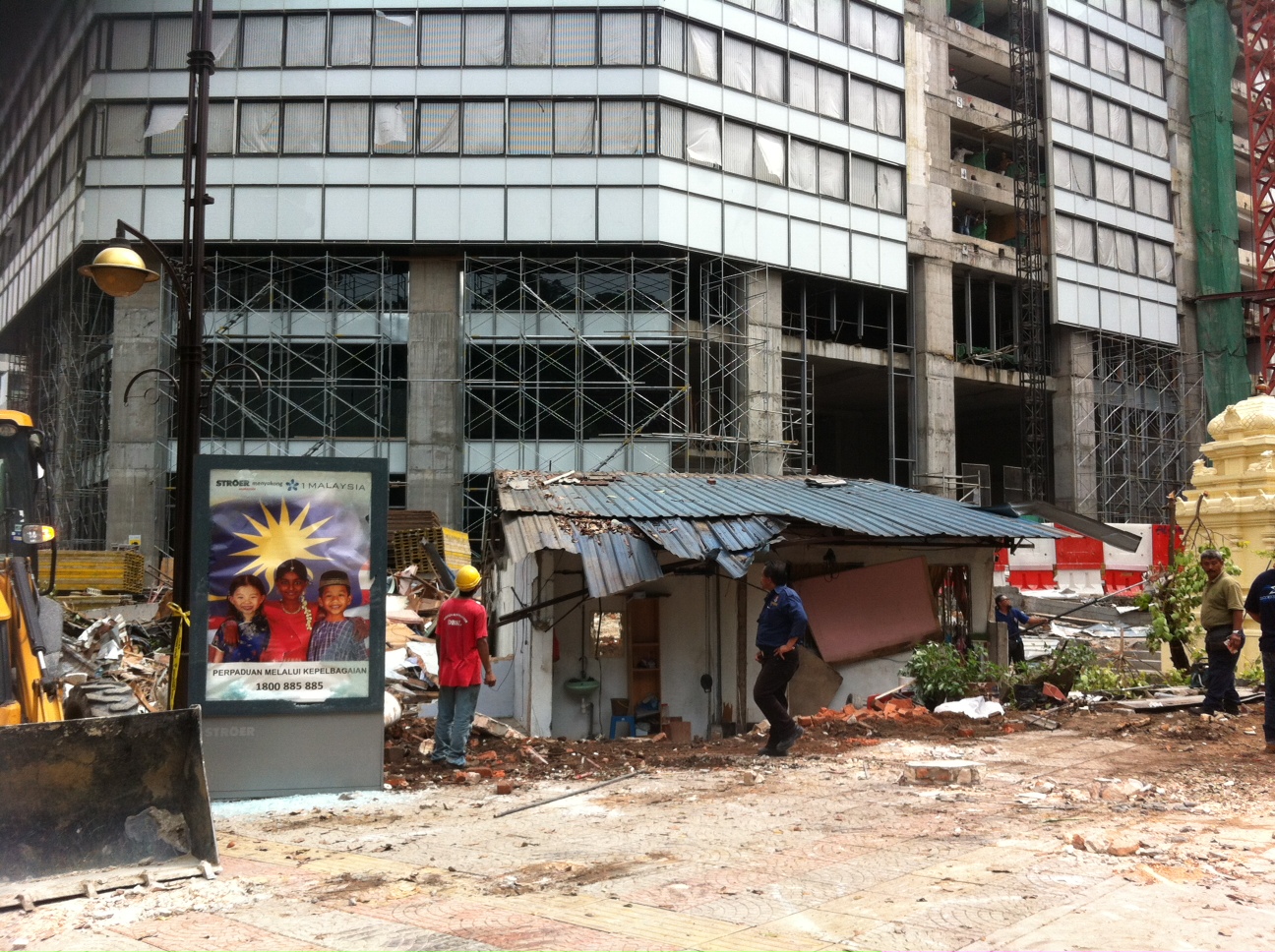 The prayer hall and shrine (right) are the only structures left at the temple site.

On Sept 1, part of the 101-year-old temple was demolished by City Hall after the temple authorities and DBKL reached an impasse in their year-long negotiations to remove the temple from DBKL’s reserve land.


Police had said only the wall of the temple at the back adjacent to a new office highrise was being demolished to make way for an 8-feet walkway.

Several political leaders, who were at the temple, failed to get any explanation from the City Hall officers as to the latest action to demolish the temple.


City Hall vans and policemen were seen checking all vehicles entering the area, with scores of people watching by the roadside.


The Sri Muniswarar Kaliamman temple is the only temple for Hindus within Kuala Lumpur’s Golden Triangle business hub.

The temple was built in 1911 is now deemed to be on DBKL’s reserve land for road expansion, pedestrian paths or drainage.

Hap Seng Land is putting up a 30-storey office building in an adjacent plot and can only get a Certificate of Fitness if it builds a walkway in line with DBKL requirements.

However, the temple is on the land that would be needed for the walkway and the developer offered some land in Sepang for the temple to be relocated to but the temple authorities rejected that offer as the place of worship had historical significance.

When the two could not come to an amicable settlement, Hap Seng sued City Hall which, in turn, sent an eviction notice to the temple.