News of the conferment turned viral after a blog entry on Tuesday by ForeignPolicy.com detailing the award, started circulating on social media.

The blog quoted a Korean Central News Agency (KCNA) article that reported on a ceremony conveying the certificate.

The simple ceremony was held on Oct 3 in the DPR Korean (North Korean) embassy in Kuala Lumpur and was attended by 35 invitees including the HELP University president Datuk Dr Paul Chan and the North Korean ambassador to Malaysia, who received the honour on Kim's behalf.

It was also mentioned that Kim Jong Un was the first foreign head of state to receive the honorary degree from the university.

In a press statement released by HELP University, Dr Chan confirmed the awarding of the degree and expressed his hope that education could be used as a bridge to reach out to the people of North Korea.

"We should use education to help the people of DPR Korea have a better life and a higher standard of living. Above all, let's help them integrate faster into the global network of open societies," said Dr Chan.

"I hope that using this 'soft constructive' approach we can help them and North Asia and the world to be a better place for mankind," he added.

In the letter, Chan shared his vision for North Korea's future and how education was an important tool for the reclusive nation's progression.

"I anticipate that it is a matter of time, within the next six years or so, that DPR Korea will engage the world in many constructive ways. I feel no one at this moment has the courage to do this though their hearts tell them to do so," he said.

Dr Chan also stressed the importance of accessible education in paving the way for a better quality of life for the people of North Korea.

"To help DPR Korea in the way we do it is a road untravelled, but we hope our first small crucial step will contribute to peace and prosperity for all."

HELP University, founded in 1986, offers pre-university and degree certifications and is known locally for its business studies and psychology programmes.

Malaysia is one of the few countries in the world who have good ties with North Korea and whose citizens are not required to have visas for entry into the nation. 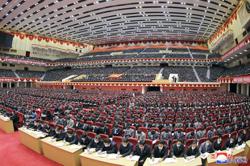