As such, the question of him being buried in Malaysia should not arise.

“Although he was born in Sitiawan, he was not a Malaysian citizen. He never took up citizenship when he joined the CPM. I believe he would be happy to be buried where he had spent time the most,” he said yesterday.

Khalid said all entry points into Malaysia were being tightly monitored to ensure there were no attempts to bring Chin Peng’s remains into the country.

Former IGP Tun Hanif Omar said Chin Peng’s body should not be allowed to be brought back to Malaysia, adding that he had fought CPM terrorists and subversive activities since his first day as a police officer in 1959 until his retirement.

He did not see why Chin Peng’s body should even be allowed into the country.

“We should look after those who stoutly fought and defeated him, particularly the families of those from all races who died or maimed fighting him and the CPM,” he told The Star yesterday.

Hanif said the CPM guerillas had refused the chance to return to Malaysia within a year from 1989 in accordance with the peace accord signed in Haadyai, Thailand.

One of those who had refused to return was Chin Peng, Hanif said, adding that the CPM was responsible for the killing of his predecessor Tan Sri Abdul Rahman Hashim.

“Surely we do not want him back without bringing him to face murder charges,” he said.

Hanif said any debate on the return of Chin Peng or his remains should cease.

“Those who campaigned for him have their loyalties misplaced or must have been supporters of the CPM’s violent insurrection to seize power in Malaysia,” he added.

Hanif said the police were generous with the terms in the Haadyai peace accord in 1989 and allowed all CPM members of Malaysian and Singaporean origin to return, provided that they must do so within a year of the signing.

“About 300 former communist terrorists returned, but we did not see any application from Chin Peng.

“When he applied to return many years after the agreement, he had effectively missed the boat and there was absolutely no reason to admit him unless he could prove he had applied within that one-year window,” he said. 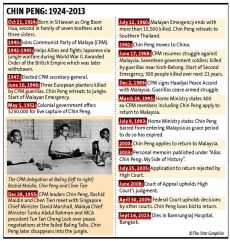 Former Deputy IGP Tan Sri Hussin Ismail said instead of glorifying Chin Peng’s struggle, Malaysians should honour the men and women of the security forces who had fought the CPM.

“We should remember our friends and comrades who died protecting the country against communist insurgency. The fallen heroes should be honoured, not Chin Peng,” he said.

Hussin said there were those who were dismayed that past efforts at counter-insurgency ended at the Haadyai peace accord.

“They saw it as a political struggle. Any political struggle is a struggle for power, and that the CPM can be expected to employ various means from infiltration and subversion to revolutionary violence if the situation permits them,” he added.