He said many women were carrying pepper sprays nowadays as a form of protection and these could help in the event of multiple assailants.

However, Ku warned that it was an offence to use a pepper spray on anyone for reasons other than self-defence.

“There's no harm in carrying them. That's the least women can do to protect themselves from harm,” he said in an interview.

Security product expert Edmund De Run, whose company has been providing security products to local law enforcement authorities for years, advised women to buy larger canisters as they could be attacked by multiple assailants.

“What if you are confronted with half a dozen guys? Assailants always have backup,” he said.

De Run said there were many pepper sprays in the market, some of which were the size of a tiny keychain.

He pointed out that women could be in even more danger should they run out of spray or fail to incapacitate their attackers.

De Run also stressed that women should hold their pepper sprays in hand during a potentially dangerous situation, such as when they were walking to their cars.

“Pepper spray is also useful at home. You can place it in a set area, where you can easily grab it should you hear suspicious sounds at night,” he advised.

His company began selling pepper spray fogs to the public in 2004 after receiving approval from the authorities.

He said the spray, imported from South Africa, was used by the police force there as well as those who needed to repel lions.

De Run said the spray, which comes in 60ml and 45ml canisters, could shoot out the burning fog at a range of up to four metres.

Once hit with the spray, which contains pure capsicum, assailants suffer extreme difficulty in breathing, temporary blindness, pain and disorientation.

It is said to be able to incapacitate assailants for around half an hour, but is non-lethal.

De Run said those who wished to buy the spray would have to register with the police database.

However, Ku stressed that the sprays should only be used as a last resort to escape from confrontation.

“I would say that the best form of protection is to run away if you can and as fast as possible,” he advised. 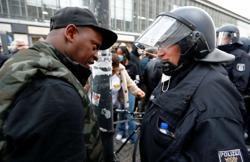 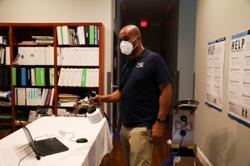 Who you gonna call? Germbusters! Pandemic drives boom in spray machines and robots