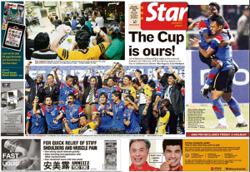 The Prime Minister made the announcement last night.

“Well done, Malaysian Tigers! You played well as a team and have made your country very proud. Congratulations!” Najib wrote in his Twitter yesterday.

Deputy Prime Minister Tan Sri Muhyiddin Yassin also praised the team, saying: “The victory proves that nothing is impossible if we truly want to win.”

MCA president Datuk Seri Dr Chua Soi Lek said the victory was a timely boost to Malaysian football and all Malaysians were united in cheering the team.