Bones found may be Bangsar Shan’s

PETALING JAYA: Pieces of human bones found by some bird trappers in Broga Hill in Semenyih were believed to be the remains of missing businessman popularly known as Bangsar Shan.

It is learnt that the bird trappers stumbled upon the human skeleton at about 3.30pm yesterday before alerting police.

Police forensics examined the body and believed the clothing on the remains was likely to belong to businessman R. Ravi Shankar, 40, who was abducted by five men on Aug 28 last year.

After Bangsar Shan’s abduction last year, Bukit Aman set up a task force and arrested 11 people who were later released.

Police also identified four suspects and distributed photo fits of the others who are still at large.

It was reported that investigations revealed that Bangsar Shan owned several nightspots and managed several parking lots in the Klang Valley.

He was also a leader of a notorious gang that went around extorting money from entertainment outlets and other businesses in the city centre, Bangsar and Desa Sri Hartamas.

Bangsar Shan was with his wife and their children at a plant nursery in Bandar Mahkota Cheras on Aug 28 last year when he was abducted. 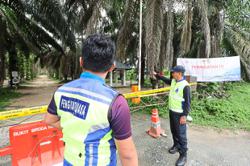