KUALA LUMPUR: The High Court will hear on June 9 an application by the Kelantan Regent Tengku Muhammad Faris Petra to strike out a civil action brought by his brother, Tengku Muhammad Fakhry Petra, over the ownership of a Bentley Brooklands car worth S$706,880 (RM1.6mil).

The application will be heard by Judicial Commissioner Zabariah Mohd Yusof.

Tengku Muhammad Fakhry, who is the Tengku Temenggong of Kelantan, filed an originating summons on Sept 9 last year, naming the Regent as the sole defendant.

He is asking for a declaration that the car was bought for his use and that of his father’s, and therefore the vehicle belongs to him.

The Tengku Temenggong also wants a declaration that the retention of the vehicle by his brother is invalid. In his affidavit to support the application, Tengku Muhammad Fakhry said that the Sultan ordered the car from Malayan Motors through a Buyer’s Vehicle Order and agreement dated April 23, 2008.

He claimed that he had signed the Buyer’s Vehicle Order and agreement on June 9, 2008, adding that all transactions pertaining to the sale and purchase of the car were between him and Malayan Motors.

Tengku Muhammad Fakhry said Malayan Motors had asked for a deposit of S$300,000 (RM689,603) and the balance payment from him which was later transferred from his bank account but noted that the official receipts were issued in the name of the Sultan.

He said the car was taken away from his premises in Duta Residency here on July 18 last year, without his consent and knowledge, by the Regent through his agents and sent to Istana Mahkota in Kubang Kerian, Kota Baru.

The Regent, in his application filed on Feb 10 to strike out the action, said the suit was scandalous, frivolous, carried out in bad faith and an abuse of the court process.

Tengku Muhammad Faris said the declarations should be sought against the registered owner of the car — the Sultan.

He also said the proper forum for such a claim against the Sultan is the Special Court, not the High Court of Malaya. Among others, he said the Buyer’s Vehicle Order and agreement executed by his brother was an attempt to circumvent the tax and customs provisions and such conduct was illegal and contrary to the law. 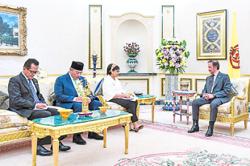