By G. MANIMARAN And DEVID RAJAH

PETALING JAYA: They are young, opinionated and Internet-savvy. And some two million such Malaysians will be eligible to vote in the next general election, and will undoubtedly have a big influence on the results then.

The power of the young could be further reinforced by four million eligible voters, many believed to be under 30 years, who did not register in time for the March 8 elections.

If these youths choose to register, the eligible voter population in the country will total 16.9 million, including the 10.9 million already registered in the country. 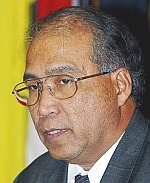 “There is already a high political awareness among the young people to participate in the election process.

“Many parties realise this and are beginning to court these youngsters to register as voters,” he added.

Wan Ahmad hoped with the heightened political awareness among youths, and in the wake of what transpired in the last general election, more would come forward to register as voters.

However, he said, the response was not very encouraging for now.

“Between January and June this year, only 100,000 eligible voters registered. But I believe next year and the following year, more will register as voters,” he said.

In 1999 alone, the EC saw about a million people registering. The next general election is due in 2013.

“I agree if there is a continuous political awareness in the country, more people will take part in the election process,” he said.

He also added that the percentage of people registering as new voters would be higher than in previous years due to the high political awareness and exposure to the new media, particularly to Internet blogs and news portals.

The parties are doing their bit.

MCA Youth chief Datuk Dr Wee Ka Siong said the party had formed an ICT bureau to engage young people via the Internet and other mediums.

“We must show them what we have done and also be able to attract them,” he said when contacted.

Johor Umno Youth chief Razali Ibrahim, who is vying for the Umno Youth deputy chief post, said: “Umno must adjust itself to engage these new voters who will decide the future of this country. Having two million young voters is actually a healthy development for the country.”

MIC central working committee member Datuk S. K. Devamany said the two million young voters “would have a mind of their own.”

“If we don’t listen to them, we will be in trouble in the next election,” said the Deputy Minister in the Prime Minister’s Department.

PKR Youth chief Shamsul Iskandar Mohd Akin said: “We are optimistic over the emergence of the new, young voters. Of course, the approach during the next election will be more interesting and fresh, where the campaign will be focused on these young voters.”

He said PKR would organise new programmes to attract them from next year.