“I feel there is no reason this cutout should be an issue,’’ he said about the giant structure which is akin to those used to promote Bollywood stars.

However, Barisan Nasional assemblymen who are against the cutout costing RM5,000 that was put up on Sept 28 argued on religious grounds that it would be tantamount to idolising Anwar and that was prohibited in Islam. 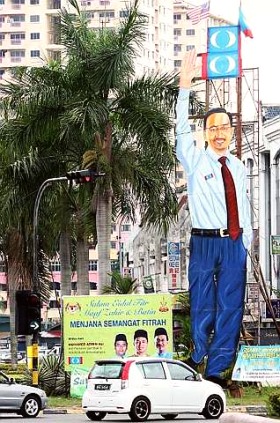 Larger than life: The giant cutout of Anwar in Batu Caves.

Kuang assemblyman Abdul Shukur Idrus said, as a Muslim, Amirudin should know better than to put up the cutout.

“He should have consulted a religious group like the PAS for advice.

“This cutout just shows that the PKR is promoting itself with banners and posters,’’ he added.

“Although there is a claim that the cutout is to wish the people Selamat Hari Raya, there are many other ways to do it.

“Besides everyone knows who Anwar Ibrahim is,” he said.

Amirudin said the cutout was initiated by activists and residents in the Batu Caves constituency to wish the people Selamat Hari Raya and it would be taken down once the duration date was up.

“I want to ask PAS whether the party gave the approval for the erection of the cutout,” he told reporters after a visit to the Kota Gemilang project in Ayer Keroh yesterday.

Perlis Mufti Dr Asri Zainul Abidin advised Anwar’s supporters not to be too extreme in their actions such as idolising the PKR leader.

“The action should be stopped immediately for fear that it would become a practise within the society.

“It can deviate the Muslim’s faith.

“I don’t blame Anwar because it was not him who put up the cutout but his supporters should not idolise too much.

“The structure must be brought down immediately,’’ said the mufti.