RM2 per litre will have implications: Najib

"Anything is possible. It depends on how much you want to set aside for subsidy," he said.

However, he said, at the current rate, the subsidy was already huge.

On Sunday, PKR de facto leader Datuk Seri Anwar Ibrahim promised that he would fix the petrol price at RM2 per litre if Pakatan Rakyat succeeded in forming the government. The RM2 per litre is a 50 sen decrease from his earlier promised price. 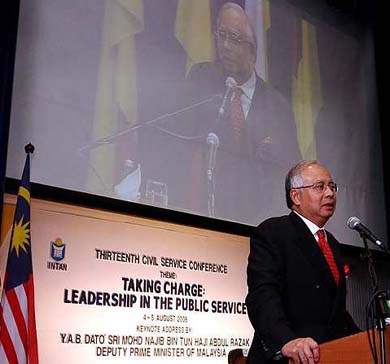 "The worldwide trend is moving towards world market price. What he is suggesting has implications," said Najib.

At the same time, the subsidy bill would be enormous and it would encourage energy consumption instead of conservation, he said.

"It is another example of his populist approach," he said Monday after launching the 13th civil service conference on Taking Charge: Leadership in the Public Service.

On Tan Sri Muhyiddin Yassin's decision to defend his Umno vice-president's post instead of contesting one of the top two posts as speculated, Najib said he respected his decision.

"I am sure he has given serious thought to it. Obviously, he wants to be a team player and does not want to disrupt the leadership and transition plan that has been announced by the Prime Minister," he said.