The three ministers were photographed with the 23-year-old Mohd Saiful. The photographs were released by the PKR leadership on Sunday. 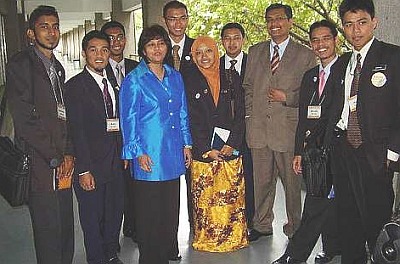 Photo with VIP: Mohd Saiful (fourth from left) standing behind Azalina (in blue dress) in this photoreleased by PKR on Sunday. However, Azalina said she could not recall when the picture was taken orknowing Mohd Saiful.

Shahrir, who is Domestic Trade and Consumer Affairs Minister, said he did not know Mohd Saiful and could not recall ever meeting him.

“I don’t even know there is a copy of such a photograph. Someone has asked me whether I had met Mohd Saiful at a college somewhere, I told him I don’t know.

“This is too much like a drama, more so when (Datuk Seri) Anwar Ibrahim is involved because he is like a drama king,” he told reporters at the Parliament lobby here yesterday.

Shahrir said he had taken pictures with many people and he only “saw his with Mohd Saiful” in the newspapers.

“I was in a baju Melayu so I think it’s probably during the Umno general assembly,” he said.

Shahrir, who laughed when asked if this was a conspiracy by the Barisan Nasional Government, said it was best to allow the police to investigate the claims made by both Anwar and Mohd Saiful.

“I don’t think this is a conspiracy. As an aide, Mohd Saiful must have had a close relationship with Anwar,” he said, adding that it would have been impossible for Umno or Barisan to plant somebody like that.

“I don’t know whose conspiracy this is. There has been more transparency in this country since 1998 (when Anwar was last arrested) within the media and the judiciary.”

Azalina, who is Tourism Minister, also said she could not recall when the photo of her with Mohd Saiful was taken but said it was probably during her tenure as Youth and Sports Minister.

“I honestly do not recall taking the photo nor do I know who Mohd Saiful is,” she said.

When asked, Mustapa said it was ridiculous to say he was involved based on a picture.

He, too, said he could not recall who Mohd Saiful was or when the picture was taken.

“In fact, I only found out about it after I saw it on a news website. It is absurd to say that we (Barisan Nasional leaders) would resort to such things,” said Mustapa, who is Agriculture and Agro-based Industries Minister.