Johor petroleum hub to save Govt RM200mil a year

GELANG PATAH: The Government will save RM150mil to RM200mil a year with the construction of the petroleum hub in Tanjung Bin.

This is because the country will no longer have to rely on Singapore and pay double handling as well as cross-harbour costs.

“This involves government subsidies, and RM150mil to RM200mil can be saved when these are sent directly to the petroleum hub,” he said, adding that Iskandar Malaysia would be a petroleum products supply and distribution centre in the region. 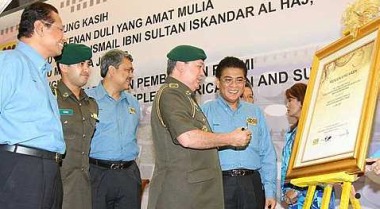 Official opening: Tunku Ibrahim singing a plaque at the opening of APH base in Gelang Patah, Johor, on Thursday. Among those looking on are Abdul Rashid (right), Abdul Ghani (left) and Raja Muda of Johor Tunku Ismail Ibrahim (second from left).

He was speaking to reporters after the opening of Asia Petroleum Hub’s (APH) RM50mil multi-purpose fabrication and supply base in Iskandar Malaysia by Tengku Mahkota of Johor Tunku Ibrahim Ismail Iskandar.

The fabrication yard and supply base is designed to support the construction of its RM1.5bil petroleum hub on 40.5ha of reclaimed island in Tanjung Bin, scheduled for completion at the end of next year.

Abdul Ghani said the hub would blend, store and supply petroleum products for the region, adding that it would also have other spill-over effects, including those related to maritime, shipbuilding and ship repair as well as insurance, thereby increasing job opportunities.

The Tengku Mahkota said the project would ensure that petroleum products were brought into the state at competitive rates.