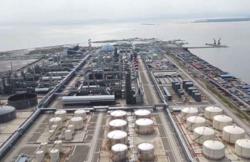 KUALA LUMPUR: Malaysia has an advantage over others in attracting foreign investment or investing abroad as it has a niche in China, India and West Asia, said Federation of Chinese Guilds and Associations or Huazong president Tan Sri Lim Gait Tong.

The Chinese, Indians and Malays in the country had their advantage and connections, Lim said, adding that a united Malaysia would help in expanding the nation's economic cake.

This would bring further stability and prosperity to the country, Lim said at the 50th Merdeka Anniversary Cultural and Arts performance at the Bukit Jalil National Stadium here last night.

Lim urged the Government to have open and transparent policies to attract foreign investment, increase job opportunities and boost the economic development.

Malaysia, he noted, was built by people of all races and that the tolerance and mutual help among them had brought stability and prosperity.

Huazong, Lim said, would support any effort made by the Prime Minister to promote national unity and social development to lead the country to further progress.

Related Stories:Community showcases big contributions to nation Achievement a joint effort of all