NEW YORK: Malaysia has made known at the United Nations its concerns over climate change and rising discord between civilisations, saying that these were among two global challenges facing mankind today.

“The course of human history is marked by a few pivotal moments, during which we can make the correct or wrong decisions that will impact on the destinies of those who come after us,” Datuk Seri Abdullah Ahmad Badawi said.

There must be a will to moderate mankind’s excesses using science and technology as tools, the Prime Minister said.

“The time for us to invest in our collective future is here and now.”

Speaking on climate change, Abdullah cautioned that the worst has yet to come.

“The 2007 Report of the Intergovernmental Panel on Climate Change has made it clear that the scale and urgency of the challenge is greater than we had thought and feared.”

Addressing the 62nd UN General Assembly on Friday, Abdullah said a post-2012 agreement must be built upon the fundamentals of the Kyoto Protocol.

There should be absolute emission reduction targets for developed countries but the poorest countries of the world, which had the least capacity to adapt, should be allowed the least responsibility to mitigate the impact of climate change.

Climate change had implications on the global economy as well and not just the environment, he said.

“This is an important additional reason why the principle of differentiated responsibilities must apply, so that developing countries can maintain their capacities for sustainable development.”

Abdullah also spoke about the growing discord between Islam and the West, which he said was threatening to tear apart the fabric of peaceful relations between peoples and nations.

The cause, he said, was the repeated use of force by the powerful over the weak to secure strategic or territorial gains.

“The problem of Palestine, which has been festering for 60 years, tops the list of grievances which the Islamic world holds against the West.”

This was the single most important issue blocking peace and fraternity between Islamic and western countries, he said.

“All of us must play the role of honest brokers, assisting them through a difficult negotiating process on the path towards true peace. The onus of delivery is on all of us.”

He also said that Malaysia supported various international efforts to hold dialogues that made it clear that Islam was a religion that espoused universalism not exclusivity, tolerance not bigotry.

“On their part, Muslims have a responsibility to present to the world the true face of Islam. It must be made clear to all that Islam is a religion which abhors conflicts, more so between Muslims,” he said.

Abdullah, however, stressed that he was optimistic that universal human fraternity and coexistence was attainable “if and when the critical political and strategic issues are resolved, in tandem with the closing of the gap of misunderstandings between cultures and civilisations.”

This required wisdom and courage to recognise the problems, he said, adding that the well being of the Earth was within mankind’s control. 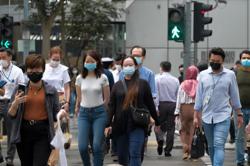