KOTA KINABALU: Former state basketball player Francis Wong Yee Vui was jailed 18 years by the Sessions Court yesterday after he was found guilty over the death of a fast-food restaurant worker two years ago.

Sessions judge Nurchaya Arshad also ordered Wong, 25, to pay the family of Cindra Sue alias Sandra Yalip RM120,000 in compensation as provided for under Section 426 of the Criminal Procedure Code.

Wong, who was charged with culpable homicide not amounting to murder under Section 304(a) of the Penal Code for the killing of Cindra Sue at an apartment at Api Api Centre here in April 7, 2001, appeared calm as Nurchaya delivered her judgment following a nine-month trial.

However, several of his relatives at the courthouse were seen sobbing as he boarded a vehicle to take him to prison.

Earlier, Nurchaya held that she found Wong guilty over the killing of Cindra Sue, who had rented a room in the apartment owned by him.

During the trial, the prosecution, led by Senior Federal Counsel Abdul Rasid Sudin, stated that Wong had admitted to police that he had strangled Cindra Sue twice, which led to her death.

The court also heard that Wong had obtained a suitcase from his Indonesian maid and stuffed Cindra Sue’s body in it before dumping it on a slope at Signal Hill near the city.

The suitcase was discovered about a week later by joggers passing through the area.

Following Nurchaya’s verdict, Wong’s counsel Sugumar Balakrishnan asked for a lenient sentence, saying that his client was a first-time offender. 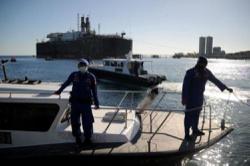