KUALA LUMPUR: Efforts to promote Malaysia as a health tourism destination are starting to pay off with more foreign tourists coming to the country for treatment and recuperation, Health Ministry parliamentary secretary S. Sothinathan said.

He said they were attracted by the affordable and quality healthcare facilities offered by private hospitals.

“The Health Ministry will co-operate with these hospitals, tour agencies and other relevant bodies to come out with packages to attract more of such tourists,” Sothinathan said after opening the Atmos Medizintechnik (Asia) office in Kuala Lumpur on Thursday.

Sothinathan said about 100,000 foreign tourists sought treatment in hospitals in 2001 which generated revenue of RM150mil compared to about 39,000 tourists and RM9mil in revenue in 1998.

Atmos Medizintechnik, a German company, manufactures ear, nose and throat diagnostic therapy equipment as well as suction pump for use inside a hospital or home care area. Its products are distributed to over more than 80 countries worldwide.

Atmos Malaysia was established in 1995 to provide efficient after sales service to the customers while the newly set-up Atmos Asia headed by Ravi Ramana, who is a Malaysian, would produce locally assembled medical equipment to be exported to Asia Pacific.

Its managing director Peter Greiser said Malaysia was chosen as the hub because the healthcare standards in the country were on par with the western countries and better than some developing countries. 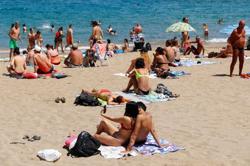 Despite Covid-19 success, Vietnam will not open door to all foreign tourists