We need a mindset change to increase recycling in the country. — AP

THE country is targeting to increase its recycling rate by 2% per year until 2025, says the Housing and Local Government Ministry.

This is to achieve its target of reaching a 40% recycling rate by 2025 under the 12th Malaysia Plan.

“This target covers all categories of waste which can be recycled, such as metal, paper, plastic, glass and other materials like fabric and rubber products.

“We are continuing to aim to increase the rate by 2% every year until we reach 40%,” the ministry says.

Based on feedback from recycling plants in Malaysia, the ministry says 2.76 tonnes of plastic were successfully recycled out of the 4.27 tonnes of recyclable waste collected in 2019.

Such recycled plastic comprised 64.69% of total recyclable wastes that year.

“This amount is higher compared with 2018, when 1.57 tonnes of plastic were recycled,” the ministry says.

From the overall total of solid waste in Malaysia, an estimated 20% of it are plastic items.

The most common type of plastic wastes found in landfills is a clear film type of plastic known as low density polyethylene (LDPE) – widely used to make items like grocery bags, plastic wrapping and packaging material.

This is according to the Solid Waste Management and Public Cleansing Corporation (SWCorp), which conducted a solid waste composition study between 2018 and 2020.

“Other types of plastic waste are rigid plastics like PVC (polyvinyl chloride) and polystyrene,” says the ministry.

PVC is normally used for things like pipes while foam plastic like polystyrene can be made into boxes or disposable eating utensils.

“Beginning this year, masks were included in the waste composition study.

“A current estimate from three research sites showed that masks constituted 0.6% of solid wastes disposed of in landfills every day,” the ministry says.

On increasing recycling facilities and collection centres in Malaysia, the ministry says it is continuing such efforts.

“At present, there are about 4,118 recycling collection centres nationwide and this is expected to increase yearly,” it says.

Efforts to promote recycling are also made by the community, including Malaysian Nature Society president’s Dr Ahmad Ismail.

Ahmad retired as a professor from Universiti Putra Malaysia but continues to manage a recycling programme at the university called Recycling@U.

He hopes to expand it to other universities in the country and inculcate the culture of recycling among more people.

“I’m proposing to make this programme a model for managing plastic pollution, which can turn waste to wealth,” he says, adding that he hopes to involve universities in Sabah, Sarawak and states on the East Coast of Peninsular Malaysia to promote the concept of plastic management.

Ahmad says the programme began in 2012 when he observed that many plastic bottles and cans were thrown everywhere on campus, especially at the bus stop.

“This was a bad habit in the university’s community.

“Such a culture should be changed and from there some ideas were produced on how to educate the university community on recycling,” he explains.

If possible, Ahmad says he hopes to continue this programme until 2030 in line with Malaysia’s road-map towards zero single-use plastics by 2030.

“The demand for zero plastic waste in the ocean is increasing among scientists to save marine life from deaths caused by plastic.

“As Malaysia is among the main contributors to plastic debris in the ocean, a campaign to manage plastic is necessary,” he says.

Tackling the rising amount of trash 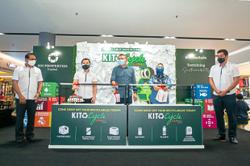