Shy and gentle: If China has the panda, we have the tapir. The Malayan tapir can be a cute symbol for states and districts. – Shariff Mohamad/ WWF-Malaysia

ALTHOUGH the Malayan tapir is native to our country, there are still many misconceptions surrounding it, says World Wide Fund for Nature Malaysia (WWF-Malaysia) wildlife conservationist Christopher Wong.

In fact, Wong says that many have mistaken the endangered tapir for a large anteater!

“I hope for people to be more aware about the existence of this beautiful animal in our forests and the threats that it faces, ” says Wong in an interview in conjunction with World Tapir Day on April 27.

Wong is part of the team involving government bodies and other wildlife NGOs to develop the Malayan Tapir Conservation Action Plan (MaTCAP) to restore tapir numbers.

“The way they move is so gentle, ” says Wong, recounting a memorable encounter over a decade ago with a wild Malayan tapir in Kelantan.

“We parked our car on the side of the road to conduct some research when we realised that there was something in the bushes behind us.

"When the team shone light on the source of the rustling, a large adult Malayan tapir slowly creeped out to munch on some ferns close by."

As tapirs have bad eyesight, this tapir did not realise that it was being keenly observed by two surprised but delighted wildlife conservationists.

“It was just so beautiful, having a tapir right in front of the greenery, ” says Wong. Perhaps it is time to consider promoting the Malayan tapir widely as part of the national image, he muses.

“The Malayan tapir can be a very cute symbol for states and districts. If China has the panda, our black and white tapir can be as cute, or even cuter.

“Their characteristic of being a very, very shy animal makes it one of the reasons they are not often observed. In recent years, there has been more news about the tapir but it is not for a good reason, because they appear as roadkill, ” he says.

It is estimated that there are less than 1,500 Malayan tapirs in Peninsular Malaysia.

Wong explains that the tapir is an animal that can adapt to many situations.

“We see tapirs eating bark, shoots and even secondary fern. When habitat disruption occurs, it destroys food resources and this forces the tapir to go out of their natural habitat, ” he explains.

“Everything adds up to the high number of Malayan tapir roadkill.”

Despite their poor vision, tapirs have excellent hearing and a sense of smell. While they are gentle creatures and may look harmless, tapirs can defend themselves with their strong jaws and sharp teeth and so it is best to let sleeping tapirs lie. A source of pride

In the more than three decades of work with the Wildlife and National Parks Department (Perhilitan), tapir conservationist Mohd Samsudin Mohd Suri has had his fair share of memorable wildlife experiences, but one stands out above the rest – a surprise visit by curious and unusual houseguest.

It all happened in 2014 when Mohd Samsudin was carrying out conservation work while posted as a superintendent in Taman Negara, Kuala Tahan.

Mohd Shamsudin described one particularly tame tapir that would come by the Perhilitan office area from the jungle by itself every day.

“Once, he entered into my housing quarters and everything turned chaotic, especially since it was school holidays and my family were visiting!, ” Shamsudin recalls.

The episode ended well as the adult tapir managed to find its way back to the jungle safely.

Shamsuddin believes that it would be a great loss to the world if Malayan tapirs were to go extinct, and this urgency has driven him to become even more passionate about protecting them.

“If we can address the roadkill issue, increase reproduction rates, introduce more sanctuaries and enrich our jungles... there is still hope. It is not too late for the Malayan tapir.”

A tapir population survey is also currently being carried to determine the latest approximation of Malayan tapir numbers in the country, he adds.

“Tapirs have been found in Thailand, Sumatera and Vietnam, but most of them are here in Peninsular Malaysia. We should feel proud that we have the Malayan tapir and we need to work together to protect this species.”

The Malaysan tapir holds a special place for the Malaysian Nature Society (MNS) – the black and white herbivore is emblazoned on the group’s logo.

MNS president Prof Dr Ahmad Ismail believes that all Malaysians should be proud of the tapir, and has called for support towards conservation efforts and urged for wider protection of tapir habitats.

Ahmad calls for more research and grants to be awarded for study on the Malayan tapir so that Malaysia can be best equipped to protect them. 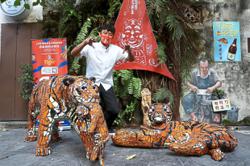