Necessary measure: Any limitations on our rights must be necessary, proportionate and in the pursuit of a legitimate aim – and protecting people in a public health crisis clearly meets this requirement.

While protecting public health must be prioritised, we should not abandon our principles and commitments to other rights, including equality and non-discrimination.

THE temporary movement control order (MCO) implemented on March 18 in response to a sharp spike in confirmed cases of Covid-19, has now been extended to April 14, amid fears of its further spread.

The order calls for limited movement and a ban on mass gatherings, including social, cultural, religious and sporting events.

All Malaysians are barred from travelling abroad and foreign tourists and visitors are not allowed to enter the country. All schools, government and private premises are closed except those providing essential services.

The total number of cases in Malaysia began to dramatically rise this month and the figure now stands at more than 2,300. This is an unprecedented public health crisis which is affecting all of us. While the government is correct in taking these drastic but necessary measures, human rights, in particular the principles of equality and non-discrimination, must not be set aside.

The World Health Organization has also declared the spread of Covid-19 a global pandemic. It has now reached every continent except for Antarctica and there are over 600,000 cases worldwide. Measures have been taken by countries all over the world to limit the spread of the disease, with varying levels of interference and impact upon human rights. Regardless of the approach to containing the virus and protecting public health, simultaneous steps should be taken to respect human dignity and rights.

The right to life and health are universally recognised and are a fundamental part of our understanding of a life with dignity. Other rights are also engaged by the authorities’ reaction to the disease outbreak, as we face self-isolation, social distancing and quarantine. While human rights must not be compromised lightly, there can be competing factors at play and they must be balanced. The freedoms of personal liberty, assembly, association, movement and religion must be weighed against the right to life and health in a way that is justifiable and in line with international standards. Any limitations on our rights must be necessary, proportionate and in the pursuit of a legitimate aim – and protecting people in a public health crisis clearly satisfies this requirement.

Before the MCO was in place, several large scale religious events were allowed to go ahead, and sporting activities were scheduled to continue with full stadiums. Over 16,000 people participated in the Tabligh gathering at a mosque in Sri Petaling in late February, including 1,500 foreigners. Up to 30,000 people attended a Hindu festival at Teluk Bahang beach in Penang just a week later. Malaysia’s Covid-19 death toll stands at 27, and according to the Health Ministry, approximately 52% of all cases in the country are linked to the Sri Petaling Tabligh event. While this is tragic and unsettling, we have to remain calm and resist the urge to apportion blame or turn on one another.

The suggestion from some participants in the Tabligh gathering that most locals had been tested and it could be the “foreigners” spreading the coronavirus is not helpful. We do not know how many participants were carrying the disease, how they contracted it or where it came from. None of this matters now – there are many more participants who could be at risk. They must observe the government’s advice and feel safe to come forward for testing now without fear, whoever they are.

While protecting public health must be prioritised, we should not abandon our principles and commitments to other rights, including equality and non-discrimination. Unfortunately, there have been worldwide reports of a rise in racism and xenophobia as a result of the spread of the coronavirus, fuelled in part by hate speech and disinformation online. As Malaysians, proudly multi-cultural, multi-racial and multi-religious, we must not fall into this trap of looking for “others” to blame. We should look for solidarity, not scapegoats.

When we think about public health, we sometimes forget that the public are not one homogeneous group, not least in Malaysia. Our population includes people who are elderly, suffering with disabilities, in poor health, low income earners, stateless, refugees, migrants (including many who are undocumented) and everything in between. Measures taken to control the spread of the disease will necessarily impact upon people of all backgrounds, some more than others. The effectiveness of the response on those who are the most marginalised will have a direct impact on mainstream society.

Consider the struggles of refugees in Malaysia, who are often tolerated or welcomed on an informal level, but are not legally recognised in this country. With limited or no access to lawful employment, state education or reliable information in their own language, refugees are already more socially and economically vulnerable. Crucially, refugees have limited access to healthcare in Malaysia. Most have legitimate fears of arrest, detention and deportation because of their legal status, and avoid healthcare and other public services altogether.

The lack of recognition and truly accessible healthcare for refugees therefore creates a risk for everyone, as people who have already fled violence and persecution in their home countries still live in fear of coming forward to the authorities here. This simply cannot go on when we are facing a global pandemic, which does not operate on the basis of one’s legal status and could infect any one of us.

Fortunately, the Health Ministry issued a circular stating that free tests and treatment will be provided for everyone with symptoms of the coronavirus, including foreigners. This is a wise move but it is crucial that it is communicated to everyone, particularly as a number of Rohingya and other Muslim refugees are known to have attended the Sri Petaling Tabligh event.

This disease does not discriminate and our own health is only as strong as the person’s next to us. It is a stark reminder that we are not so different from one another. We should be more mindful of those who we might normally consider to be distant from us and our daily lives.

Indigenous communities, people living in remote areas, those with chronic health conditions, people who are homeless, in detention and in prisons are all at greater risk if the disease spreads further. But if any of these groups suffer, we all suffer. We need to ensure that everyone is considered and protected in our response, including specific efforts to reach the most vulnerable communities.

The coronavirus outbreak highlights the importance of creating a society which is truly inclusive, equal and non-discriminatory. Long term, we should aim for the highest attainable standard of health including ensuring that all public healthcare services, goods and facilities be made available, accessible, acceptable and of good quality for everyone. In the meantime, we should continue to act calmly, rationally and on the basis of advice from the Health Ministry and other reliable, scientific sources.

The steps taken by the government so far are justified in the name of public health, and they must continue to act in ways which are proportionate, transparent and lawful. While the MCO temporarily limits some of our freedoms, we should remember that many communities less fortunate than us are going through this too and they are struggling more than anyone.

More than ever, we need to reinforce and strengthen our commitments to actively protect the human rights of everyone, without exception, in our society.

Eric Paulsen is the Representative of Malaysia to the Asean Intergovernmental Commission on Human Rights (AICHR). 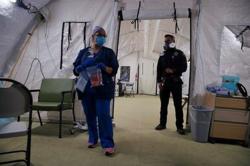