Hidden danger: Sullage, coloured green by algae which proliferate due to the presence of sewage, flowing directly into Sungai Klang from the Keramat neighbourhood in Hulu Klang, Kuala Lumpur. This source of pollution is often overlooked in river-cleaning efforts. ¿ Filepics

A river will be clean only if nothing fouls it up in the first place.

VARIOUS initiatives, from installing trash traps along rivers to building river water treatment plants, have been carried out to spruce up Sungai Klang under the River of Life project but two major sources of pollution – sullage and stormwater runoffs – are not getting much-needed attention.

The Federal Government has allocated RM4bil for the River of Life (ROL) project. It began last year and different parcels are in various stages of completion, all of which are to raise the river water quality from the current Class III and Class IV (not suitable for body contact) to Class IIB (suitable for body contact and recreational usage) by year 2020.

The project area covers Sungai Klang from its upstream until its confluence with Sungai Kerayong, as well as its tributaries, the Gombak, Batu, Bunus, Jinjang and Kerayong rivers – altogether totalling 110km. The clean-up effort will target pollution sources in Kuala Lumpur and the municipalities of Selayang and Ampang Jaya. 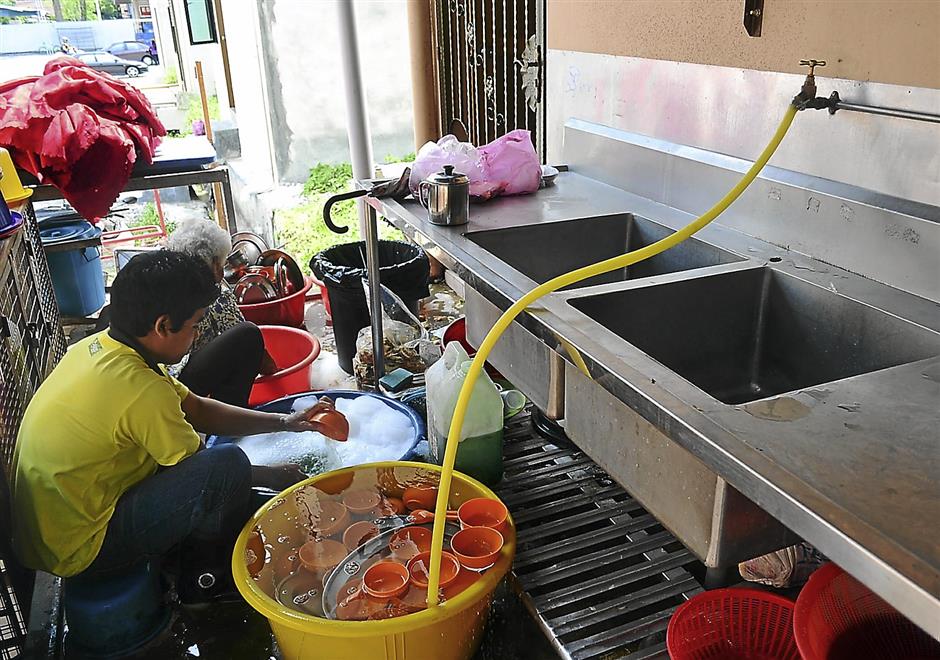 The common practice of washing dishes beside drains, thus allowing sullage to flow into waterways, is
not allowed under the law but few restaurateurs have been penalised for it.

The past 30 years have seen billions of ringgit spent on numerous projects to revive Sungai Klang, yet, the river remain as murky as ever. Hence, scepticism has arose on whether the project can succeed in improving the water quality. However, according to the Department of Irrigation and Drainage, past attempts to clean up the Klang River systems have been in an ad hoc manner by different agencies and municipalities, and lacked ministerial-level co-ordination and follow-up monitoring.

The ROL consists of these key initiatives:

> Use retention ponds to remove pollutants from sewage and sullage.

> A study on water quality improvement and hydrological assessment for Sungai Klang.

Though comprehensive and relevant in cleaning rivers in the Klang Valley, most of the initiatives involve maintenance work, which is always not a priority in Malaysia. Missing from the list of initiatives is the control of sullage and runoff outflows to river. Gross pollutant traps can only trap solid waste and are not effective in removing other pollutants.

Likewise, the proposed wastewater treatment plants for five wet markets will not significantly reduce pollutants as there are too many sources of sullage and rubbish.

Under the ROL, the installation of 20 communal grease traps in Ampang Jaya, 26 units in Kuala Lumpur and 20 units in Selayang are insufficient based on the large number of eateries in these municipalities and the practice of washing dishes beside drains at many restaurants. This “silent” pollution activity contributes significantly to river pollution.

As a country with high rainfall, Malaysia uses a sewer system with a segregated drainage and sewerage system. The drainage system is for stormwater (rainwater) discharges while the sewerage system is for wastewater discharges and treatment. This differs from the combined sewer system in other countries, where stormwater and wastewater are mixed in huge sewer tunnels connected to wastewater treatment plants. The combined sewer system is not practised here as the high rainfall can lead to sewerage overflow. The “open drain” approach, which eases the direct discharge of sullage into stormwater drains, is widely adopted here due to the local high precipitation.

Sullage, being a type of wastewater, should be discharged to a sewer line and channelled to a sewage treatment plant. However, in Malaysia, sullage is directly discharged into drains. Stormwater runoffs should flow to a retention pond, constructed wetlands or an infiltration basin which, besides serving as natural treatment facilities, can control flood and downstream erosion. Rapid development in the Klang Valley has resulted in more impermeable ground which causes more urban runoffs. Runoffs from wet markets, hawker areas and car wash shops end up in drains which flow into rivers.

Although the concentration of pollutants in sullage is not as high as sewage, the flow rate is much higher, resulting in higher pollution loading in rivers. According to a study by Dr Azni Idris of Universiti Putra Malaysia, the annual loading of sullage is higher than that of sewage in rivers at urban areas.

Under the ROL project, more trash rakes, trash screens and floating booms are being placed along rivers and in flood detention ponds. Also, gross pollutant traps are installed in major drains but these only remove litter, debris, coarse sediment and grease from stormwater and cannot improve the water quality. Similarly, grease traps in restaurants, which serve to capture oil and grease, cannot eliminate or reduce the pollution level of sullage.

Enforcement of relevant rules and regulations on sullage discharge is the fundamental solution to sullage management. The Street, Drainage and Building Act 1974 forbids unauthorised connection of drains into public canals or streams; discharges from toilets and trade effluent into canals, streams, ponds or drains; and discharges of blood, brine, swill, noxious liquid or other offensive or filthy matter into public places. Pollution prevention or “source control” is the only pragmatic approach in preventing river pollution. Instead of spending billions of ringgit on river or lake rehabilitation and remediation, why don’t we do source control? Strong public awareness is essential for this. The public needs to understand the appropriate function of our open stormwater drains.

Both structural and non-structural measures have to be adopted to achieve the objectives of the ROL project. “River cleaning” is not a comprehensive solution without pollution prevention as pollution will continue after the cleaning.

To improve the river water quality to Class IIA, seven strategies are proposed:

> Identify the sources of runoffs (stormwater, sullage, sewage treatment plant effluent, wastewater from markets and slaughterhouses) in the Klang Valley and their outflow points.

> Prevent runoffs from entering rivers by diverting them to nearby constructed wetlands or retention ponds.

> Enforce regulations and penalise offenders who discharge sullage into drains. Prohibit restaurant operators from washing dishes at back lanes and beside drains.