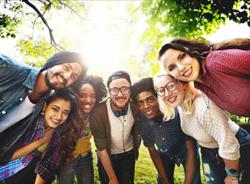 Shining bright: Khey Whey was awarded the Most Inspiring Award at the MonStar Awards 2020.

IT is often said that today’s young talents will be the country’s leaders tomorrow.

The accolade is dedicated to young talents whose award submission was the most inspiring, USM said in a press release last month.

The MonStar Awards is organised annually by students from more than 14 education institutions across Malaysia.

Held virtually for the first time, the award ceremony saw more than 10,000 viewers in attendance.

Honoured, proud and glad to receive the award, Khey Whey said she hopes her performance can inspire people.

“Performance is an act of presenting a play, concert or any form of entertainment. But performance to me is an art, a medium to deliver a meaningful message, to reach out to people by showing them in live movements instead of telling it through regular conversation.

“I wish to inspire more people through performance. One of my aims is to draw a bridge between communities by making them understand each other, creating a harmonious blend of different cultures and mentalities. I am striving towards representing the voice of the minorities by telling their stories to the public and to provide a platform for them to express their voices.

“Observing how audiences respond to the stories told through performances made me realise how much a performance can impact people and I am determined to ignite more fire in the world’s hearts.”

Khey Whey, USM said, practised her mantra of making the impossible, possible, and exemplified what it means to be a well-rounded student.

Describing her as a “clear favourite” for the category, Monsta Asia founder Zhi Ee Chan said: “She showed consistent leadership, has positively influenced her peers, and has enthusiasm and eagerness to learn and experience new things.

“She demonstrated a high regard for values of integrity, honesty and respect in the way she leads and carries herself.”

“To lead is to inspire! I am grateful to MonStar Awards 2020 for giving me another opportunity in life to inspire others and to build a better environment for Malaysia.

“MonStar Awards is an opulent event; one that not only celebrates youth but also motivates us to do better for ourselves and for our society,” said Yong Qi.