Rise of the machines

IN the past few years, significant and rapid progress has been made in the field of artificial intelligence (AI). It’s come to a point where students and their parents are understandably asking: “If I enrol in a particular degree, will I end up in a dead-end career because the job will eventually be done by machines?”

It’s a valid concern, particularly as the world becomes increasingly high-tech and digital. To seek knowledge, we no longer need to ask the teacher when Google, Alexa and Siri are at our beck and call.

Indeed, Jack Ma, founder of Alibaba, famously said: “We cannot teach our kids to compete with machines; they are smarter.”

A recent World Economic Forum “Future of Jobs Report 2020” projects that by 2025, the hours of work performed by machines and humans will be the same, and although 85 million jobs will be displaced by automation, 97 million new jobs will be created.

Low-skilled jobs, which are mundane, repetitive and require minimal analytical thinking, will be most impacted by machines. This isn’t a new phenomenon – one needs to look no further than automated teller machines (ATMs) and the rise of online banking.

Research firm Oxford Economics estimates that since the year 2000, some 1.7 million manufacturing jobs have already been lost to robots, and this trend will continue.

The driving factor here is largely economic – the cost-benefit of operating a machine workforce versus a human one.

Machines are superior to humans at processing large amounts of data.

One recent example is autonomous vehicles, which can now process significant amounts of sensory data, in real time, to drive safely without human assistance.

Almost 30 states in the United States have passed legislation relating to the use of autonomous vehicles, so it’s only a matter of time before the technology takes over the jobs of taxi and Uber drivers.

Machines are also better number crunchers. But in many cases, the number crunching capability of machines will complement existing jobs. Machines, for example, can be used to detect financial fraud – a task that is painstakingly time-consuming and error-prone if done manually – allowing finance managers to be more productive with other tasks.

Similarly, in the field of

surveyors to create and simulate digital models of building, enabling projects to be completed faster.

Machines will augment workers and provide them with tools designed to enhance their productivity, not replace them altogether.

Individuals will spend more time working in teams and with clients, helping them to make sense of the analysis and insights generated by machines, discussing options and making decisions.

We will always need people who can solve problems, engage with others, brainstorm, negotiate, resolve conflict, manage other people and lead change.

If you’re a nurse or doctor, it’s unlikely that machines can replace the warmth and empathy that are required when dealing with patients. Nor is it likely that many patients will find it particularly comforting being “serviced” by a machine.

As smart as machines become, they won’t easily replace jobs that require the human touch.

Social interaction and experience are integral in most jobs. In higher education, for example, online degrees have been available for two decades, but the preference for the majority of students is still to go to campus where they can mingle with their peers and lecturers, and participate in activities and events.

While online learning is a convenient solution in the current Covid-19 global pandemic, it won’t displace the desire for in-person, face-to-face interaction.

The bleak vision of a workplace dominated by robots is more science fiction than reality. Machines will replace some jobs and enhance many others, but will also provide opportunities in new and emerging areas such as data sciences, software engineering and digital transformation.

Students should be excited about, and not fearful of, this new world of opportunities.

Prof Wing Lam is Provost and CEO at University of Reading Malaysia, an international branch campus of the University of Reading, United Kingdom (UK). He has held a variety of academic positions in Malaysia, Singapore and the UK. Prof Wing completed his PhD in computer science from King’s College London in 1994. He has published over 80 peer-reviewed articles and journals. His current areas of research interest include technology and innovation. The views expressed here are the writer’s own. 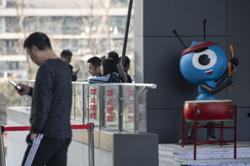