EIGHT years ago, Samuel Isaiah was posted to SK Runchang, Pahang as an English language teacher.

Bright-eyed and just out of IPG Kampus Pulau Pinang, the Teaching English as a Second Language (TESL) graduate was still looking for his passion in life.

Today, Samuel is among the top 10 finalists for the Varkey Foundation Global Teacher Prize 2020.

He was shortlisted from a selection of over 12,000 nominations and applications from more than 140 countries.

“I accepted the offer to study TESL because I did not want to go through the Sijil Tinggi Persekolahan Malaysia (STPM).

“While at the teacher training institute, I planned to do my Master’s and PhD after graduating and then venture into academia as a university lecturer.

“But reality hit me when I was posted to SK Runchang, an Orang Asli school.

“At the time, the environment was toxic and being prideful in my 20s, I felt that I was too good to teach in this school,” he told StarEdu.

Barely a few months at the school, and Samuel, 33, was already looking for a way out.

What changed everything for him was when the children showed their appreciation towards his efforts to improve their command of the English language.

It stirred his passion to serve the community with the purpose of bridging their educational gap.

“It’s the main reason I’ve stayed on all these years despite having to travel almost 200km everyday to school.

“The children are my heroes – my goal is to make as much difference as I can for them.”

When Samuel joined the school in 2012, the passing rate for the English subject stood at 30%.

He knew that the textbook method of teaching was not going to be fruitful, as English was a foreign language to many Orang Asli schoolchildren.

“If I teach you the Filipino language just from a textbook and test you on it – you will not do well.

“I had to find an alternative method for my children that was meaningful to them and that related to their culture.

“Plenty of people disagreed with me because my approach towards education was a complete turn away from the norm,” he added.

To improve his pupils’ understanding and comprehension in the English language, Samuel came up with fun programmes, such as an e-mail exchange project called ‘Asli E-Pal’, where pupils communicate in English with adult volunteers in Malaysia and overseas.

He also introduced the ‘Speak Up With Poetry’ programme where pupils would watch poetry related to their culture in the form of guided videos to learn English and bought ukuleles through crowdfunding to improve their English through songs.

“The improvement began showing in my third year at the school when the passing rate jumped to 80%. We even hit a 100% passing rate in 2015.

“It was an arduous journey but today, I have produced pupils who love learning.”

The US$1mil (RM4.3mil) Global Teacher Prize 2020 award is organised by the Varkey Foundation in partnership with Unesco.

It was set up to recognise one exceptional teacher who has made an outstanding contribution to the profession as well as to shine a spotlight on the important role teachers play in society.

By unearthing thousands of stories of heroes that have transformed young people’s lives, the prize hopes to bring to life the exceptional work of millions of teachers all over the world.

With 10 years to go to meet United Nations Sustainable Development Goal 4 – providing a quality education for every child – the Global Teacher Prize partnered with Unesco to ensure teachers are right at the top of governments’ agendas.

Samuel is the second Malaysian to be in the Top 10 list.

He wants to build an educational hub that caters to Orang Asli education, social welfare and well-being if he wins the prize.

The award ceremony will be held virtually this year on Dec 3 and will be hosted by British actor and comedian Stephen Fry from the Natural History Museum, London.

Samuel, a Fulbright scholar pursuing a Master’s degree in Educational Policy and Leadership in State University of New York, was recognised as one of the 10 winners of the Star Golden Hearts Award 2019 – an annual award that celebrates everyday Malaysian unsung heroes – for his work with the Orang Asli children. 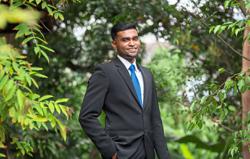 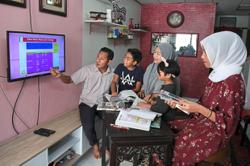