Celebrating with a roar

A cohort of 53 ‘rats’ and 76 Year Five pupils form the outline of Mickey Mouse’s head to symbolise the arrival of the new year. Photos: GLENN GUAN and RAJA FAISAL HISHAN/The Star

“Celebrating Chinese New Year is not a matter of getting ang pow, but it is to treasure the importance of family and the beauty of a Chinese civilisation’s values about life, ” says the teacher from Catholic High School (CHS), Petaling Jaya.

Growing up in a small Chinese village in Penang, Michael, 60, who will be retiring on Feb 21, shares that there were only three out of 30 families in his community that were Indian.

“But everyone got along well, like family. We learnt to appreciate each other. This is why I love celebrating Chinese New Year, ” says the teacher who became fluent in Hokkien and Mandarin which he picked up on his own.

Noting that instilling good values and culture starts from home, Michael urges parents not to neglect their role in exposing their children to different cultures and also preserving their own unique one.

“It can preserve the beauty of the culture, ” he shares after the launch of the CHS’ Chinese New Year celebration.

This year’s celebration at the school involved a number of activities which include calligraphy writing for all students as well as non-Chinese teachers, lion dances and an exhibition on Chinese culture.

The ceremony was officiated by the school’s board of directors chairman Tan Sri Lim Hock San, who enjoyed the spectacular lion dance performance comprising Forms One and Two troupe members.

Lim, who is also LBS Bina Group Berhad managing director, believes that this new year will bring about new challenges and beginnings.

“Let’s face them all together, ” he tells students in his opening remarks.

Lim says his Chinese New Year wish is for the country to stay harmonious and peaceful.

Noting that Malaysia is one-of-a-kind, he says Malaysians should learn about forgiveness this New Year.

“We live in a multicultural and multi religion country. We have our differences but we need to learn how to forgive and continue to live harmoniously among one another, ” he says.

The crowd held their breath and clapped appreciatively as two pairs of agile lion dancers climbed, kicked, jumped and maneuvered their way with ease atop high pillars at the sunlit foyer of Sunway University.

The event not only showcased Chinese culture, it was also a platform for students to demonstrate their talents through a variety of perfectly executed stage performances.

Students and staff also got to enjoy an exhibition on traditional Nyonya games, a Nyonya display house, and the Chinese cultural corner which showcased the art of calligraphy, beading, tea art and many more.

Lee says she is proud of her students for organising and executing the event professionally.

“We (Sunway University and College) celebrate all festivities on campus and it is all done by our students!

“What I especially love is that festive celebrations here are always inclusive, ” says Lee, beaming happily.

Besides celebrating festivities, she adds that diversity is also celebrated and embraced by all the races and nationalities in Sunway.

“It is the different cultures Malaysia has that makes it so special. This is what the Malaysian spirit is about - accepting and enjoying each other’s cultures.

“This is what Sunway has been championing all these years, ” she said.

Addressing parents, Lee says children need to be taught from a young age about putting aside differences and staying united.

“Youngsters need to be aware that there are differences (among the races of the country), but at the same time, there is beauty in that. And those differences should be celebrated, ” she said, adding that she was proud of the Sunway students for showing a good example.

For her Chinese New Year wish, Lee hopes that unity in Malaysia will continue to improve.

Potential is a term often used by Margaret Lim, principal of SMJK Choong Hua in Bidor, Perak, to describe her school.

“I always tell people that although Choong Hua (Bidor) is a small school, it has a lot of potential, ” she says.

The way to tap into students’ potential, she says, is to expose them to new things that can expand their minds, be it in education, current issues or culture.

Students’ creativity can also be unlocked through new experiences which was why SMJK Choong Hua chose to welcome the New Year in a different way this year, adds Lim.

Collaborating with Subang Jaya’s Alfa International College, SMJK Choong Hua, Bidor welcomed the year of the rat by designing 3D rats as a part of its celebrations.

A total of 320 students participated in the 3D workshop conducted by Koh on Jan 10 in the school hall.

Lim says enthusiastic students got to share their talent and creativity in the four-hour activity.

“Students were provided with the drawing templates and they coloured as instructed by facilitators. They were extremely happy to see their final product in the shape of the 3D rats, ” says Lim.

She says this year is expected to be a good year because “it is the start of a new beginning”.

“Rat is the first in the rotation of the 12 zodiac signs, meaning that a rat year is a year of renewal, ” she explains.

SMJK Choong Hua will be holding its main celebration ceremony on Jan 22 and has invited neighbouring schools to join in on the fun.

“The celebration is part of the school’s effort to put an emphasis on the Student Integration Plan For Unity (Rimup), which is listed in the Malaysia Education Blueprint 2013-2025, ” says Lim.

Many activities including Chinese calligraphy writing for non- Chinese teachers, designing Chinese lanterns using waste materials, classroom decorations and more, have been planned and will be carried out throughout one the day.

Wearing a mask, Wong Shi Ting had a fever but insisted on going to school on Wednesday as she was determined to take part in the SJK (C) Sentul’s annual Chinese New Year welcoming ceremony.

The school located in Kuala Lumpur has always greeted the Chinese New Year in style and this year is no different.

A cohort of 53 “rats” and 76 Year Five pupils are part of the “welcome team” who formed the outline of Mickey Mouse’s head to symbolise the arrival of the new year.

The rats in this case refers to Year Six pupils born in 2008.

Marking the arrival of Chinese New Year is a tradition that has been happening at the school since 2013. It also takes the opportunity to educate others on the significance of the event.

Headmistress Toh Soke Teng says she makes it a point to foster the spirit of unity among her “children” in school.

The activity, she says, is an effective way to teach pupils about Chinese culture, adding that the school celebrates all major festive seasons.

The young ones, she says, need to learn about unity from an early age so they can maintain the harmony in the country.

“For Hari Raya, we would wear traditional Malay clothing and learn how to make ketupat from our Muslim staff.

“For Deepavali, teachers and pupils would make kolam together. Every year there will be a different design, ” shares Toh proudly.

“It is important to enjoy the different festivals in a multicultural country such as Malaysia.

“When we celebrate together, we learn that we should not fight with each other, ” says the lad who loves to eat all types of Chinese food.

“The whole family celebrate Chinese New Year together at my uncle’s home every year.

“I love Chinese New Year because I can try delicious food and snacks like nian gao. I also love the red bean soup!” he says in fluent Chinese.

He hopes 2020 will be a prosperous year for everyone, especially pupils sitting for the UPSR later this year.

“This is because my grandparents are living in Sabah. We bought our flight tickets last year and my parents, younger brother and I will be going to visit them, ” she says.

“Chinese New Year would be incomplete without the jiao zi (meat dumplings) made by ah ma and mum, ” says the prefect who plans to learn to make the traditional Chinese dish. 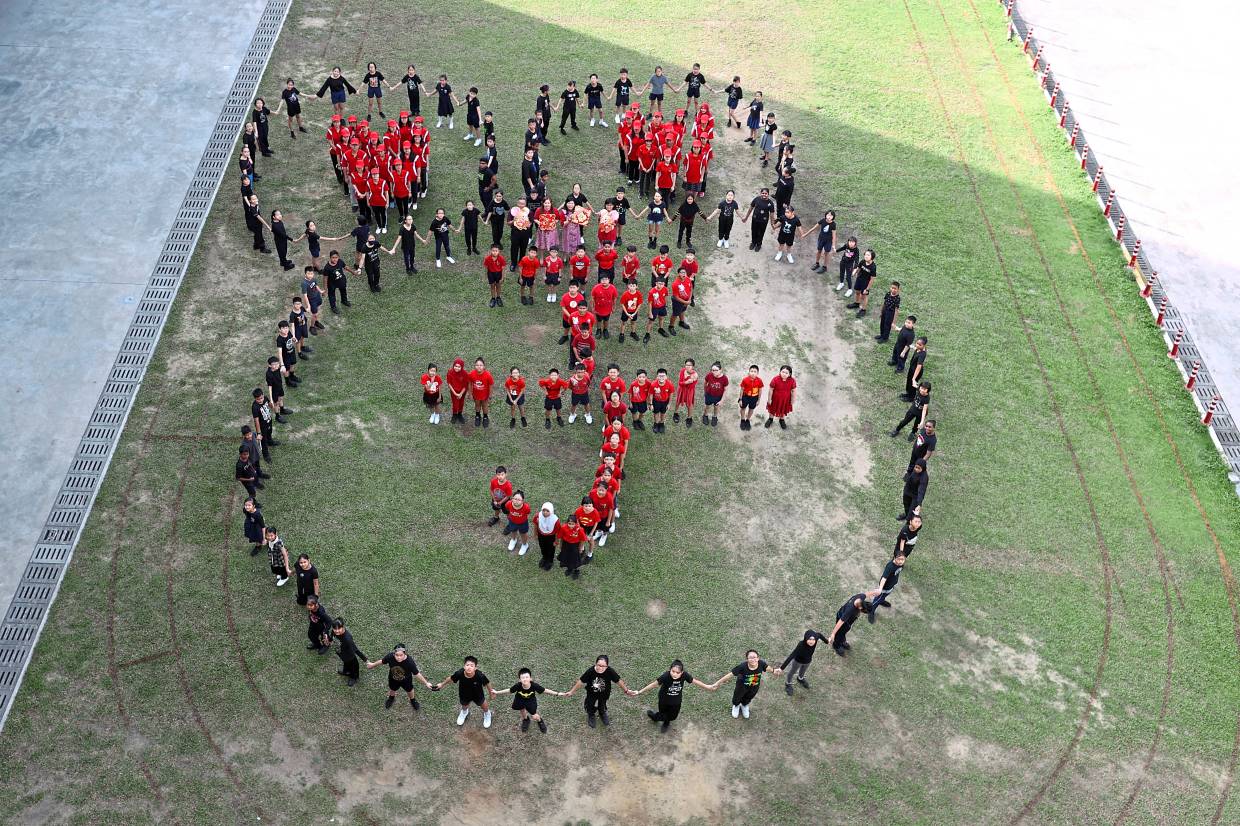 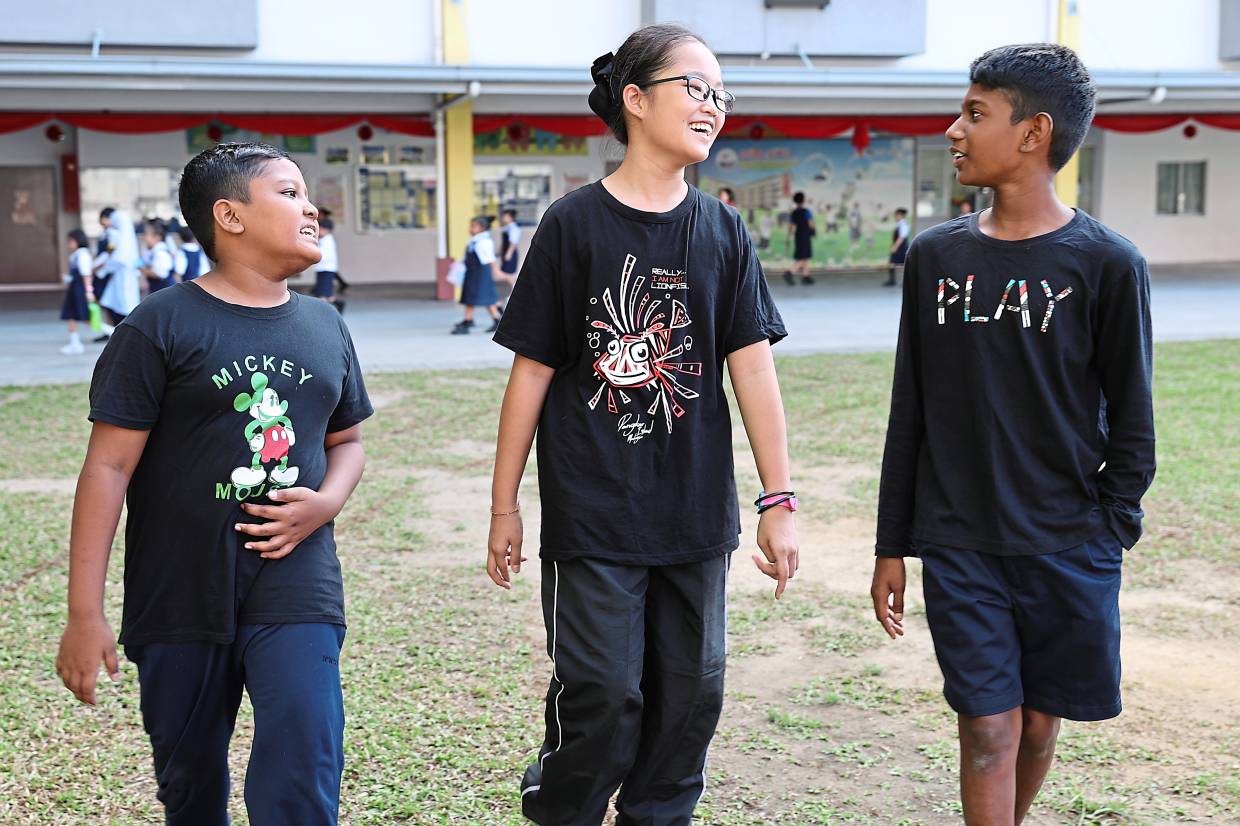 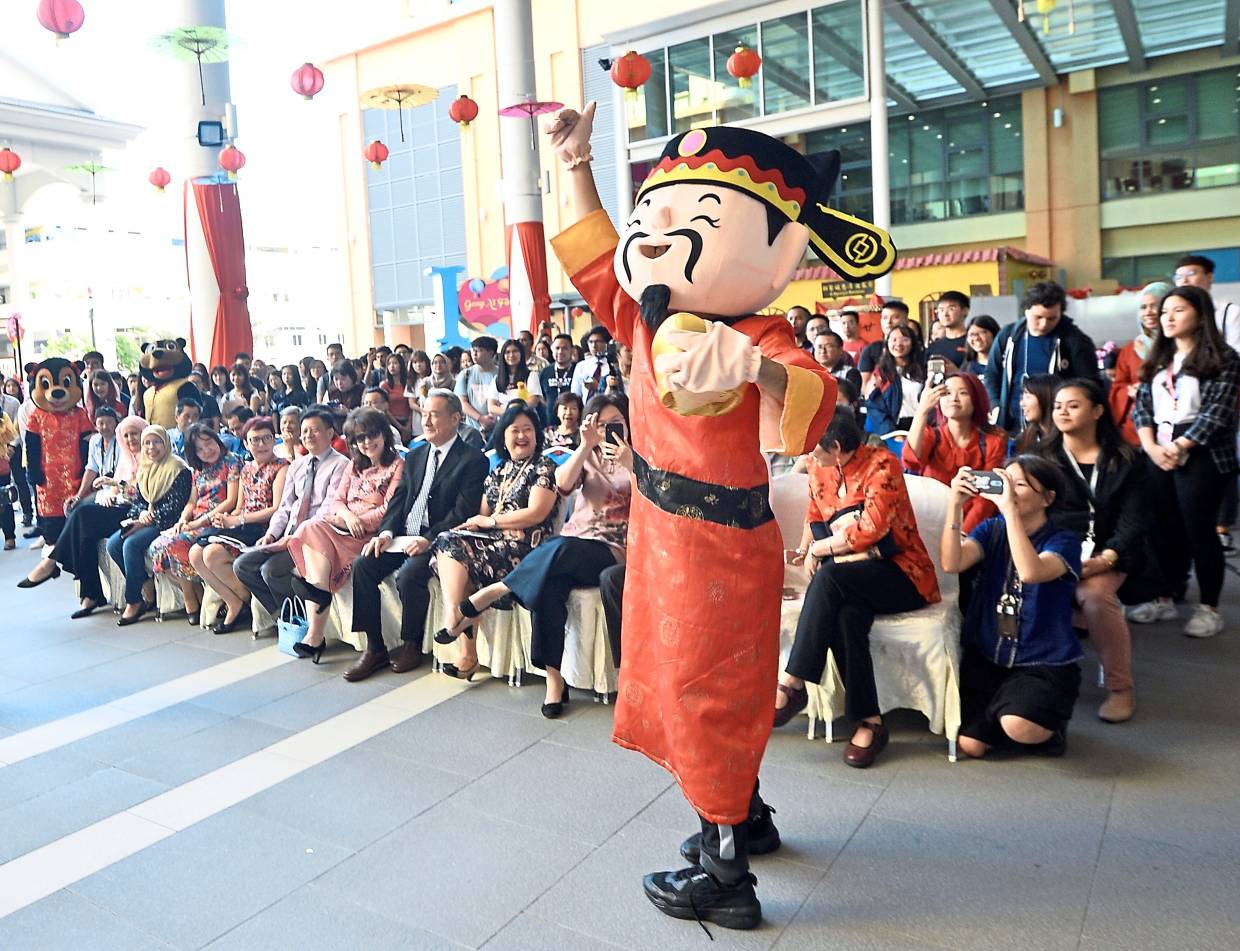 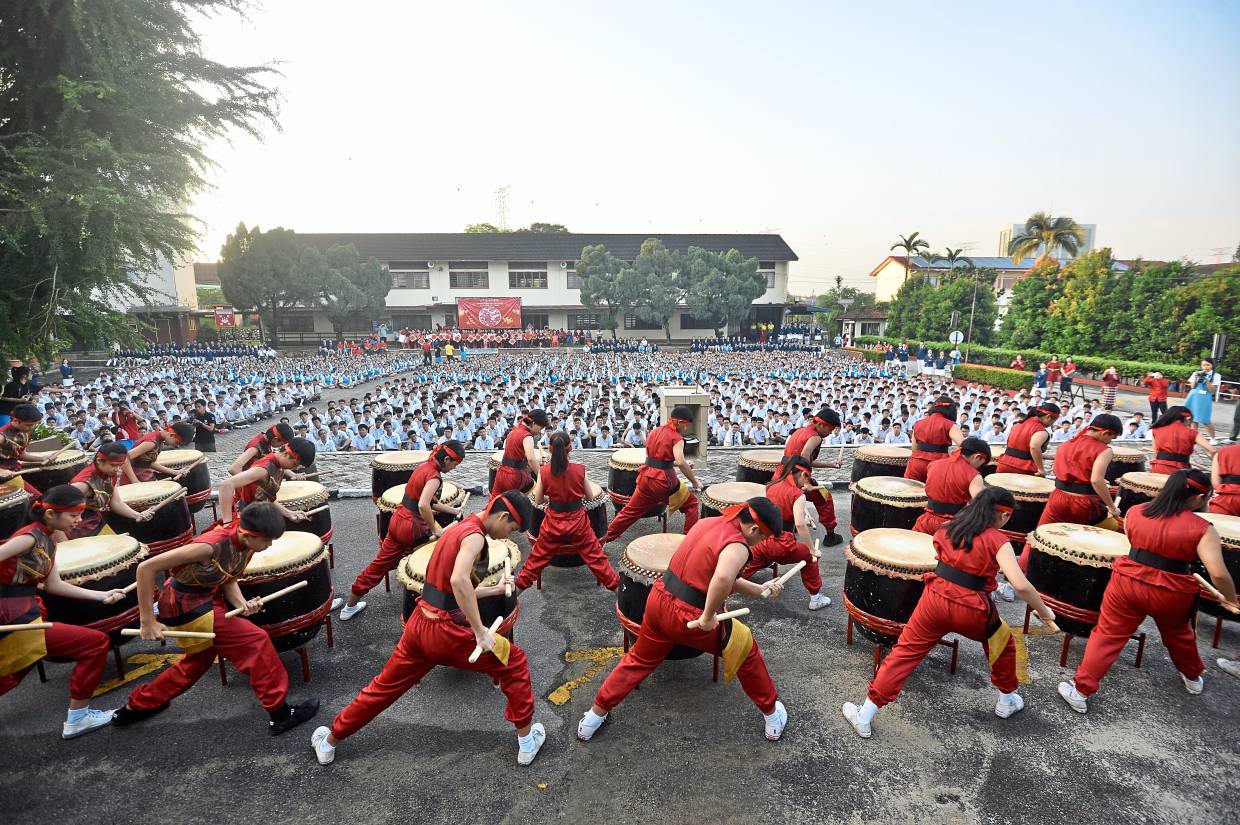 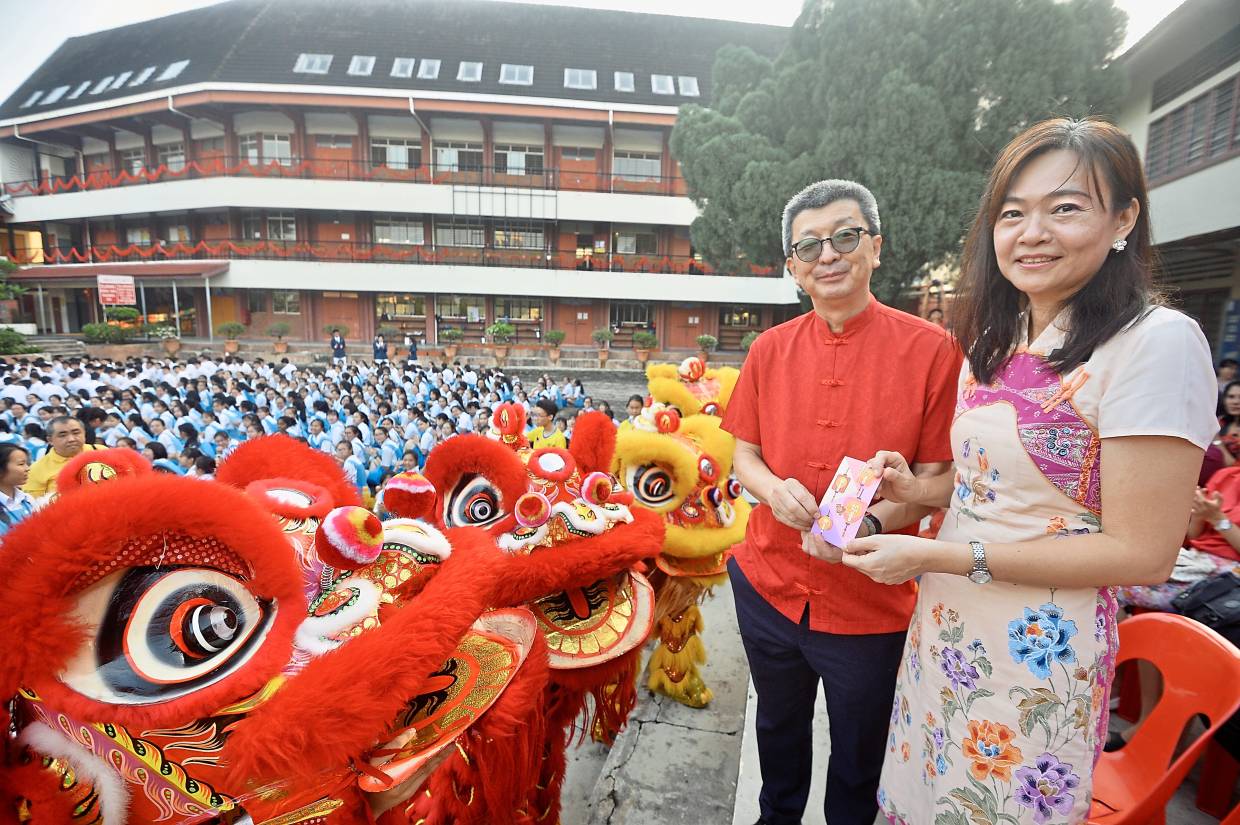 A cohort of 53 ‘rats’ and 76 Year Five pupils form the outline of Mickey Mouse’s head to symbolise the arrival of the new year. Photos: GLENN GUAN and RAJA FAISAL HISHAN/The Star

(From left) Al Iqram Insia, Jia Qi and Mithllesh talk about how they will be celebrating the lunar new year.

The God of Wealth blesses the crowd with wealth at Sunway University’s lunar new year event as (seated in the front row, from fifth left) Teo, Lee and Pua look on.

Catholic High School students kick off the celebrations with an energy-filled tang gu (Chinese drum) performance as their school mates watch in the background.