StarEdu speaks to the Education Ministry’s curriculum development division to understand how much students learn about coding and programming in national schools.

WHEN the implementation of khat, or Jawi calligraphy, became a national issue, many raised their concerns over the matter.

Among them include questions on why our schoolchildren are learning calligraphy and not ‘beneficial’ subjects such as coding.

To this, Education Minister Dr Maszlee Malik said coding has been introduced in schools since 2016, starting with Year Six.

While Australia and Thailand will be introducing coding into their school curriculum from next year, Education Ministry curriculum development division director Dr Mohamed Abu Bakar said it isn’t something new for Malaysia.

“We’ve had it in our curriculum for years.

“Coding elements were present in the old curriculum but with very minute details of the topic. We beefed it up in the new curriculum to keep up with technology and current trends. 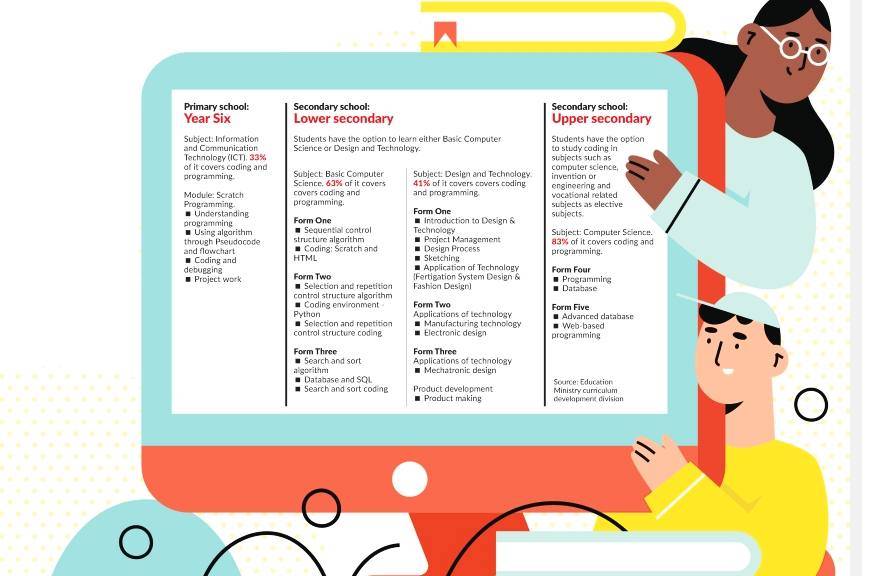 “We want them to develop higher order thinking skills and come up with products through their coding and programming knowledge.

“The focus here is for them to write coding instructions for things like robotic components and applications, ” he said.

Mohamed said elements of coding are also present in science subjects through project-based learning, though minimal.

“The division is exploring how we can expand its coverage in the Sciences.

“The future of sciences, such as medicine, is changing where digital equipment are ubiquitous and pervasive, so we must keep up with what’s new.

“We have to also be on par with other countries and look at how they cover coding and programming in their syllabus, ” he said.

Explaining further, Mohamed said the division looked at the United Kingdom, United States (US) and Singapore’s curriculum on coding as reference.

Training the teachers and being proactive.

The Malaysia Digital Economy Corporation (MDEC) is one of the ministry’s service providers, Mohamed said, adding that they provide training to teachers and budget for developing modules for schools.

“Our division also conducts teacher training sessions, with our own experts and those from universities.

“It’s an ongoing and on-the-job effort, ” he added.

What can students do with school-level knowledge on coding?

What students learn in school, Mohamed said, will give them a basic understanding if they choose to study courses like Engineering in university.

“It also depends on the teachers and students, if they are creative enough to explore on their own.

“Some schools are active in participating in robotic competitions.

“For students to be well-versed in the subject matter, schools must prepare them and keep in tandem with what’s happening in the real world.

“When students leave school, we want them to be prepared not just for tertiary education but to enter the workforce.

“Depending on their capabilities and interests, some school leavers may join the workforce right after school.

“If they enter fields like the automotive industry, with the basic knowledge they have from our curriculum, they will likely need just about five to six months of industry training to have fully functioning knowledge in the area. So it does not necessarily mean that you must go through years of tertiary education to be successful.”

Malaysian students have always been active participants in coding and robotics based competitions, Mohamed said.

In 2017, during the Hour of Code campaign, Mohamed said Malaysia had the highest number of students who joined the session, outside the US, with over 40,000 participants.

Students are given the option to learn either one of the subjects.

Mohamed explained that coding in Design and Technology is applied in electronic and mechatronic topics through the use of microcontrollers.

Basic Computer Science, he said, focuses on the use of coding in different programming languages such as Scratch, HTML and Python in problem solving and projects.

“At the upper secondary level, Forms Four and Five students can further study coding in subjects such as computer science, invention or engineering and vocational related subjects as elective subjects, ” he added.

What the experts say

Feedback from parents and students