Nina (in orange shirt) believes that children can learn how to save using the simple, yet effective, money jar system.

AT the tender age of 12, Ahmad Iszuddin Ahmad Izham has already contributed over RM5,000 of self-earned money to conservation efforts on saving turtles.

This little man on a mission bakes cookies, produces tee-shirts, do-it-yourself cooking kits, and his very own recipe book, which he sells to raise funds for his movement “Save Sea Animals From Extinction”.

With help from his parents, siblings and some knowledge about managing money from a financial management programme for children, Ahmad Iszuddin on his own initiative, set aside five jars to save money – two of which are specifically for helping the needy and turtles.

He puts away part of his allowance and whatever he earns from doing chores.

Ahmad Iszuddin said he never knew how difficult it was to earn money.

“Earlier, it was more difficult when people say no to me or avoid me whenever I am at bazaars selling my cookies and other merchandise.

“So, because of that, I don’t simply spend the money I raise. I portion it based on what is important to me and make sure some is saved in the bank and the rest, I donate to Turtle Conservations.

“I feel very happy whenever I’m able to raise money, but in order to do that, I have to work very, very hard,” said the young lad who hopes that others would follow in his footsteps.

Proud mother Nor Azlina Ishak said she hopes that the government would look into starting programmes for children on how to grow their own money.

“I believe that exposing children to entreprenueship and looking after or growing their own money is equally important as getting them a good foundation in education.

“It is important to start them young so that they would not think money is simply given to them. If money comes too easily, they would not appreciate it or know how difficult it is to earn and manage it,” said Nor Azlina.

Having sold over 600 copies of her book, Natasha amassed around RM8,000 from the sales and donated RM5,000 to various charities and people in need.

She has also dedicated 150 of her books - which depicts the story of a young orphan girl named Lyla who enters into a magical world - to children in rural schools in Sabah and Sarawak.

Ahmad Iszuddin and Natasha are graduates of Grow the Goose, a social enterprise that provides financial empowerment for children to help them attain financial wisdom entering adulthood.

Grow The Goose founder Ida Faranina Othman, who is better known as Nina, said parents who empower their children to learn how to grow their money and be financially responsible, are helping them in life.

“Being financially responsible is a life skill. If you can teach young children about good hygiene such as brushing teeth, you can certainly teach them about financial responsibility from young!

“It is a good habit that not only enables them to grow their money, but also manage finances well in the future,” she said, noting that many youngsters and adults nowadays face problems in managing finances and have already declared bankruptcy.

Nina believes that the best time to start financial education is when the child starts to ask for things.

She said children should learn that they would not get whatever they want when they ask for it.

“Parents need to learn how to say no and must introduce delayed gratification to their children because they need to know there is a trade off.

“Either you wait for some time for your parents to get the item or you work to earn money for it,” said Nina who conducts financial education programmes for children, teenagers, grown-ups, and corporate companies.

She said her workshops are based on self-reflection and understanding how financial habits could affect one’s life in the future.

“We teach them how to save using the money jar system. There is the Goose Jar, which is for money you do not touch until you are 18, and the Learn Jar for improving your knowledge and skills. The Fun Jar is for money you use to reward yourself and the Give Jar is for charity or donations.

“It is a simple system that allowes them to build the habit of saving and learn the difference between needs and wants. It is important to encourage children to earn money for their own wants as it gives them a sense of responsibility as well,” she explained.

She added that parents do recognise the need to teach their children the importance of financial management.

“But they tend to overcompensate by going the extra mile to fill the void they think their children are feeling due to their absence. What they do not realise is that if children fail to get quality time, they turn to money as the next best substitute.

“I know of parents who get their young children the latest smart phone immediately upon release because they feel guilty for not spending time with the children.

“By doing so, it eases their guilt, but they must know that this method does not have long lasting effects,” said Nina. 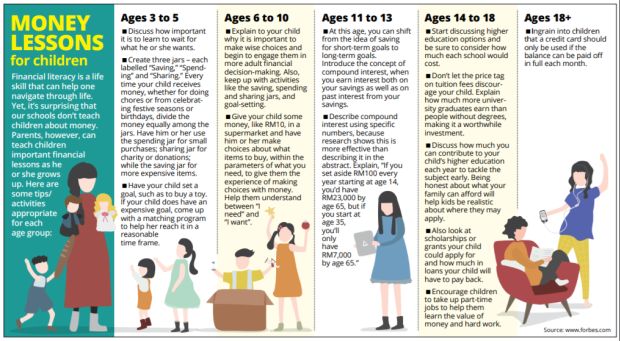 Living within their means