Music on their minds

Music as a career option is becoming more popular among school-leavers.

Music may not be a popular career option but it is gaining traction among school-leavers.

STUDYING music may not be as popular as accountancy, engineering or medicine.

“I think to some extent, society is more open now to music education.

“One indication to me is that there are more students with good academic results who are supported by their families to pursue music,” adds the professor, who also teaches the piano at the institute.

“In the past, I have come across a few top scorers in Sijil Pelajaran Malaysia (SPM) with 10As and 11As or with a high CGPA but they say that what they really want to do is music,” he shares, but adds that there are still parents who do not agree.

He says that he has also noticed a trend where parents who are more educated are more open to allowing their children to pursue courses they are interested in.

He adds that when he counsels parents, he says to them: “If your child is good, knows what they are doing, has good principles and good work ethics, you will never be worried about not being able to make a living. Whatever their profession may be.” Though still not seen as a lucrative career option unless “you are a superstar,” Prof P’ng strongly believes the performing arts is just as big a contributor to the development of society.

“I think a lot of people look at the arts as something that you do when you’re free and that society pays too much attention towards being successful in your academics.

“But how can you say you are a developed country that is progressive and advanced if you just develop the brain but not the heart?” he says.

Studying performing arts requires someone to really understand who they are as a person, he says.

This is in order to tap into their creativity.

“Whatever artistic statement that you say, you have to say it with sincerity and really believe in what you do,” he explains.

“It’s not really that easy to do performing arts because it doesn’t generate income by the thousands,” he adds.

However, there are ways a music graduate can also make a lot of money.

“If you take a look at producing good music, it takes a lot of specialised training and people will pay for it.”

Another good option is for musicians to teach playing instruments or singing.

“If you’re willing to put in the hours and teach or do gigs, to earn a few thousand ringgit a month is not that difficult.

“If they’re qualified, there will be a market,” he says, adding that it also depends on how entrepreneurial someone is.

When it comes to other career options, Prof P’ng says graduates have gone into virtually most of the areas of music.

“This ranges from business to administration to performing to education to music therapy to production.”

UCSI University broke into the Quacquarelli Symonds (QS) World University Rankings by Subject 2018 for the first time in March this year, ranked comfortably within the 51-100 bracket in the subject of Performing Arts.

This means it is among the top 1.8% in Asia based on the same rankings.

What makes UCSI’s subject ranking more special is that it is based solely on its focus on music as other performing arts such as drama and dance are not available at the institute, says Prof P’ng.

“We have a lot of one-on-one attention and this is exactly where our strength lies,” he shares.

“We know our students very well and we build them up to know who they really are, both as a person and as an artist.”

Prof P’ng says in March that finishing in the the top 100 out of 1,182 other universities and institutions worldwide was gratifying as it rcognised its 28 years of hard work.

“It wasn’t always smooth sailing for us and we had to prove a point in the early days that music could indeed lead to promising careers.

“We always work hand-in-hand with our students so this milestone belongs to our alumni and our students, just as much as it belongs to the teaching staff.

“We will continue working hard to build on this as we seek to improve our global standing. We endeavour to be a preferred choice, not only for Malaysians, but for students from around the world,” he adds.

In another first, UCSI University can now call itself Malaysia’s top private university as it has beaten its peers by breaching the top 500 of the 2019 QS World University Rankings.

It is ranked 481, placing it in the top 2% of all universities in the world. This is the first time UCSI is featured in the QS World University Rankings released earlier this month.

Prof P’ng likens the relationship between a lecturer and their student as one between “a sifu and an apprentice.”

He explains that at UCSI, students will work with one lecturer throughout their course when they opt to master an instrument at the institute.

He says that students can even continue with the same teacher if they continue their postgraduate study as well.

Starting with just three students in 1990, the Institute of Music now has about 300 students and are looking to add to this number.

“Right now among our 16 full-time academic staff, half of us have a doctorate,” adds Prof P’ng.

He also says the university is building more classrooms and facilities to be used for music education.

Among them, says Prof P’ng, is Onn San, the music composer for Ola Bola.

There is also Quek Shio Yee who has made a name for herself as a singer in Taiwan, he adds.

Yeoh, who plays both the violin and piano, is a lecturer at Universiti Putra Malaysia (UPM) teaching music at its music department.

During the summer months and when the university is on semester break, she travels around the world as part of the panel of Trinity College London music examiners.

When she isn’t teaching or examining students, Yeoh plays for corporate gigs and occasionally weddings.

She says she was fortunate that her family was supportive of her choice to pursue music in university, the first being UCSI.

“They most probably could see beyond what I could at that time, that this was my interest, and it was something I was really good at. Thankfully, they’re not ‘conventional’.

“The final year of completion of my degree in the United Kingdom (UK) opened opportunities I could only dream of,” she adds.

She continued to pursue her Masters in Music with a partial scholarship at Leeds University, followed by a PhD with Heriot-Watt University.

“Without having a foot in the UK via UCSI’s twinning programme, I would not have been able to come this far,” she adds.

Yeoh says that she has also noticed society’s perception towards music is slowly changing.

“Musicians are generally not looked upon favourably, unless you’ve made it big,” she says, adding that it is not easy “to make big bucks” in music.

For famous electric violinist Lau, music was the only tertiary study option he had.

The songwriter and producer points out that he was never good in the academics and that “music was the only thing I could do.”

He first learnt to tickle the ivories at the age of three and picked up a violin when he was seven.

He says his degree in classical music in UCSI has certainly helped him in his career.

“It is the all-rounded skills you develop at the education and business level.”

He also founded Mosaic Entertainment Group, while still in university.

“I was also setting up the business and teaching,” he says. 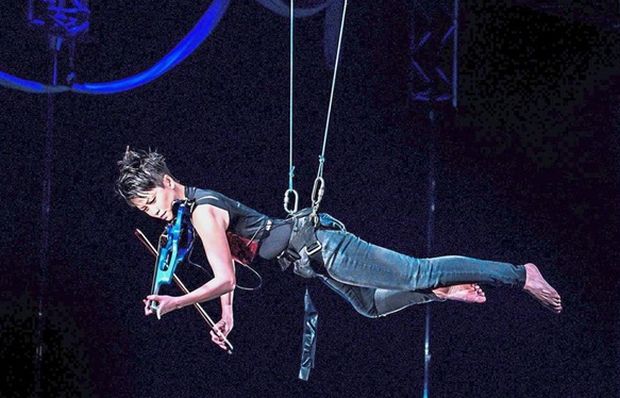 Yeoh shows her versatility by performing in the air.

While doing his degree, Lau was already performing shows outside university, such as at weddings and a hotel lounge.

He adds that he used to advertise on a free online arts and culture platform.

Being a music producer, Lau says he is familiar with other instruments as well although he majored in violin and piano.

One of the highlights of his career is performing for former and current Prime Minister Tun Dr Mahathir Mohamad.

In 2012, Lau performed for “A Doctor in the House: The Memoirs of Tun Dr Mahathir Mohamad” book launch.

In 2014, he played the violin at the 58th wedding anniversary of Dr Mahathir and Tun Dr Siti Hasmah Mohd Ali.

“He remembered me (when I performed) during the wedding anniversary.”

Lau also performed in 2012 at Istana Negara during the royal visit of the Duke and Duchess of Cambridge to Malaysia.

Lau feels that music may not be a popular tertiary study option among some in society.

“People have a stigma and stereotype about people if they opt for anything creative like the arts, design or hairdressing.

“But if you’re good, you can earn the money through being hungry for opportunities and seeking chances.”

Lau says that collaborating with other artistes is just as important, adding that he has shared the stage with Ning Baizura, Soo Wincci, Namewee, South Korean singer Lee An and Singaporean singer-songwriter Tay Kewei.

“It’s about searching for business opportunities.”

“Whatever path you take, you need to have the confidence to convince people of your promise and deliver at the same time.

“You can’t just rely on your creative skills and not deliver what the market needs.”