Fitting to an F

Speakers of the Mana Pompuan Lain? (Where are the other Women?) chat session: Selangor speaker Hannah Yeoh, Yasmin Masidi of Empower, Syar S. Alia of Beijing20 Asia pacific Young womens caucus and former student leader Fiona Lim. The session was part of Universiti Malayas Oh My Gender festival which was held in conjunction with the recent International Womens Day.

WHERE are the other women?”

This may seem like a strange question to ask at Universiti Malaya (UM) where women make up more than 60% of the student population.

To former student leader Fiona Lim, however, the question cannot hit the nail more on the head when it comes to women’s participation on campus, especially in leadership positions.

“Despite UM being a female-majority institution, the number of female students in leadership posts is still low.

Lim was speaking at the “Mana Pompuan Lain?” (Where are the other women?) forum exploring the issue of women’s participation and representation in different spaces, from campus to parliament and civil society.

The forum was one of the activities in a two-week festival on feminism and gender issues “Oh My Gender!” organised by the UM Arts and Social Sciences Faculty’s Gender Studies Programme with local women’s show 3R to celebrate the recent International Women’s Day.

The F-word - “feminism” that is - is very much a “scary” concept, if not dirty, for students, says Dr Rusaslina Idrus, a senior lecturer in the Gender Studies Programme, who is one of the key movers of the festival.

“Although we were worried that the concept would scare people off, we wanted to re-appropriate the word ‘feminism’, especially since last year there was this anti-feminism campaign on campus – “Mahasiswi tolak feminisme” (Female graduates reject feminism) by an outside NGO (Persatuan Belia Islam Nasional or Pembina),” says Dr Rusaslina.

The group had gone around local campuses to give talks on how feminism and feminists are a threat to Malaysian culture. 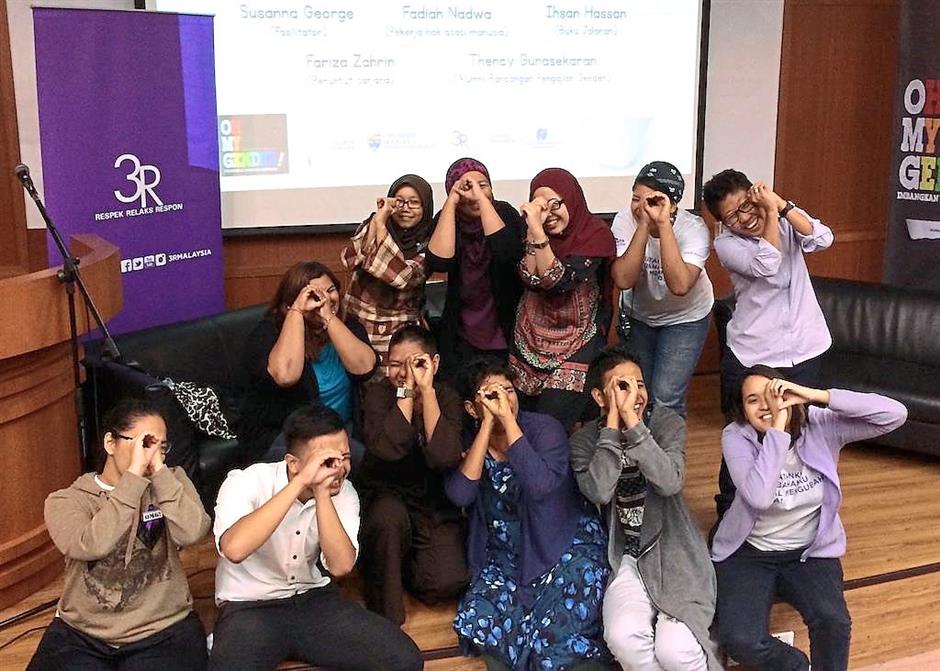 Through the female lens: Festival organisers with the speakers in the panel for Alamak aku feminis forum.

“You don’t have to embrace it or even agree, you just need to understand what it is really about,” she stresses.

A student who goes by the name of Fara agrees.

“Society also sends us the message that women already have it all - opportunity to study and work - so you don’t need feminism anymore.

“It is easy to believe that because there seems to be equality in the policies and laws, there is real equality out there. But that is often not the case,” she says, adding that women still face various “threats” such as sexism and cyberbullying.

The “Oh My Gender!” (OMG!) festival definitely tried to give students a clearer and wider perspective on feminism and gender issues – through film screenings, dialogues and workshops.

“Even for our Pawagam Pop (Pop Cinema) programme, we tried to put out the women’s voice by not only screening films on issues concerning women but also films made by women filmmakers and scriptwriters,” says Dr Rusaslina.

The films that were screened were Songlap, Embun, Rabun and Gol & Gincu which were followed with a discussion with the people involved in the films as well as film experts, women’s activists and cultural observers.

Crucially, she adds, they wanted the festival to be about both women and men.

“We wanted to highlight issues that both men and women can relate to, as in its tagline - ‘Imbangkan yang tak seimbang’ (Balance the imbalance).

“We felt it is important that the programme spoke to both sexes and we wanted to create spaces to allow all voices to be heard, especially those who have not been able to find the space to express themselves.”

And from the participation and response of many of the male students, it seemed that the OMG! festival did manage to raise their awareness of how gender issues affect them too. A student who wants to be known as Farid shares, “When they talked about gender inequality, we could see that the imbalance affects everyone, including men. Live free without violence: That’s the message brought by Universiti Malaya dance and gender studies students in their flash mob, which kicked off the Oh My Gender! festival held in conjunction with the recent International Women’s Day.

There were more than a few male students who joined the festival opener, a flash mob carrying the message of “Live free without violence”.

Held in solidarity with the International Women’s Day, the “spontaneous performance” initiated by UM’s dance and gender studies students, was based on the global 1 Billion Rising campaign against violence against women.

As the sole thorn among the roses at the podium, Ihsan created a buzz, especially when he declared himself a feminist, attesting that sexism affects men too, hence making it important for them to join in the feminist movement.

“There needs to be practice in feminism, not just theory,” Ihsan implores.

Says a student who wants to be known only as Mel, she was initially taken aback to see a man sitting on stage when she entered the lecture hall for the forum. “But then I thought, why not? Men also can be feminists,”she says.

Both Fariza and Fadiah highlighted how their upbringing had empowered them as women.

For Fariza, the importance of parents in shaping their children’s gender sensitivities became clear to her after she worked as a kindergarten teacher, where she could see how parents teach their children gender stereotypes from a young age such as: pink for girls, blue for boys, Frozen for girls, Transformers for boys.

Fadiah shared that her mother is her feminist role model – teaching her by example to be courageous and independent as a woman.

This message of the importance of breaking the gender stereotypes came out clear and strong in the forums and dialogues during the OMG! festival, specifically the aforementioned “Where are the other women?” which, other than former student leader Lim, featured guest speakers Selangor State Assembly member and Speaker Hannah Yeoh, Persatuan Kesedaran Komuniti Selangor (Empower) communications and media officer Yasmin Masidi and Beijing+20 Asia Pacific Young Women’s Caucus member Syar S. Alia.

As Yasmin told students, “Many people underestimate the effect of gender stereotype in our society and in our upbringing.

“There are many able women out there but what is holding them back is the gender stereotype embedded in the social and cultural structure.”

Lim pointed out that it might be difficult for students to see the gender stereotypes, because they are not aware of it.

“For example, we are socialised to believe that women cannot be leaders – women can’t lead because they are quieter and not supposed to speak up. They are not meant to lead or manage.

“When it comes to political events like demonstrations, our male counterparts automatically think we should not go out there while some even think we are not interested. The thing is, many don’t even realise there is this gender stereotype,” she added.

Lim urged her fellow women on campus to “try something that is conventionally unfeminine.”

Relating her experience participating in the country’s political arena since 2008, Yeoh agreed that women should not limit themselves.

“Even women leaders, after they get elected, pander to the gender stereotype – for empowerment programmes they tend to have cooking, sewing, line dancing ... these are good activities, but more as a hobby for women. Women should not limit themselves to these sort of activities.

“I for one can’t cook, but that does not make me any less of a woman. There are many women who don’t fit into that category, and they need to be empowered,” said Yeoh.

She believes in having a 30% quota, conceding that it is a challenge for women to participate in the country’s politics as they have commitments and it is not a level playing field out there.

“Women also should not be there to just make up the numbers – that is unfair,” she said.

“Women should not be afraid to show their emotions in public, being emotional or having emotions is not a weakness.”

Syar said there will be no safe spaces for women until they changed the culture and themselves.

“I’ve encountered many women who don’t identify as a feminist, who don’t see women’s rights as an issue and don’t see any problems in gender equality.

Understandably, feminism and patriarchy are big words, but if you break it down to their day-to-day experience, many women will tell you that they have experienced inequality and sexism and want to change things.

She urged the students to break away from the entrenched gender stereotype and embrace independence and diversity.

“From here, think about where you want to go, who you are going to talk to. Question your own beliefs, challenge your friends.”

As she aptly summed it, “Women rights is not about one big action –– it’s about all the small steps, little changes and tiny actions.”