Prized for their passion

Their interest and enthusiasm for the sciences has driven these women to pursue careers in fields usually dominated by men, and their successes have not gone unnoticed.

WOMEN are still largely under represented in the sciences. More so than in any other field and also in most countries.

Even though the situation has improved over the years, a report commissioned by the L’oreal Foundation reveals that a high school girl is three times less likely to pursue a doctorate in science, compared with a high school boy.

The report underscores the fact that society’s stereotyping has kept many young women away from careers in the sciences.

To help solve this issue, the L’oreal-Unesco for Women in Science programme identifies, encourages, and rewards females who have made significant contributions to the advancement of the sciences.

Founded in 1998, the programme firmly believes that the world needs science and science needs women.

The programme also provides fellowships to rising young female researchers facing crossroads or difficulties that could hinder their dedication to the sciences.

This year, three outstanding Malaysian women were awarded RM30,000 under the fellowship for their contributions, through their research, to the life sciences.

Viral warfare: Dr Chan is focused on developing a deeper understanding of the Enterovirus A71 and developing new therapeutic drugs to prevent it.

She’s always been fascinated with insects and their role in the ecosystem and this interest led to her pursuing entomology (the study of insects) at university.

Her research focuses on the red palm weevil and ways to use its “natural enemy”, the entomopathogenic fungi (EPF), to control its spread.

The red palm weevil is an introduced species and has a penchant for attacking palm trees, thus making it a threat to Malaysia’s most precious commodity - the oil palm.

This pest, which also attacks coconut trees, was first detected in Terengganu in 2007 and has already wreaked havoc in date palm plantations in the Middle East.

Dr Wahizatul says the idea to use EPF came up when she was looking for a safe, environmentally-friendly alternative to control this pest.

For the past 50 years, oil palm farmers have used synthetic pesticides to combat the weevil. Not wanting to continue this “chemical warfare” on the pests, Dr Wahizatul says using EPF is also more cost-effective and a non-toxic way of fighting them.

“I am trying to develop a control strategy using natural enemies and this fungi works against more than 200 species of pests,” she says, adding that EPF grows on the insects’ bodies and soon kills them.

“Using this fungi is also not labour-intensive. In fact, it’s less time-consuming, making it more practical for small plantation owners,” she says.

Conducting research, especially out in the field, is no walk in the park. A fact Dr Wahizatul can attest to. 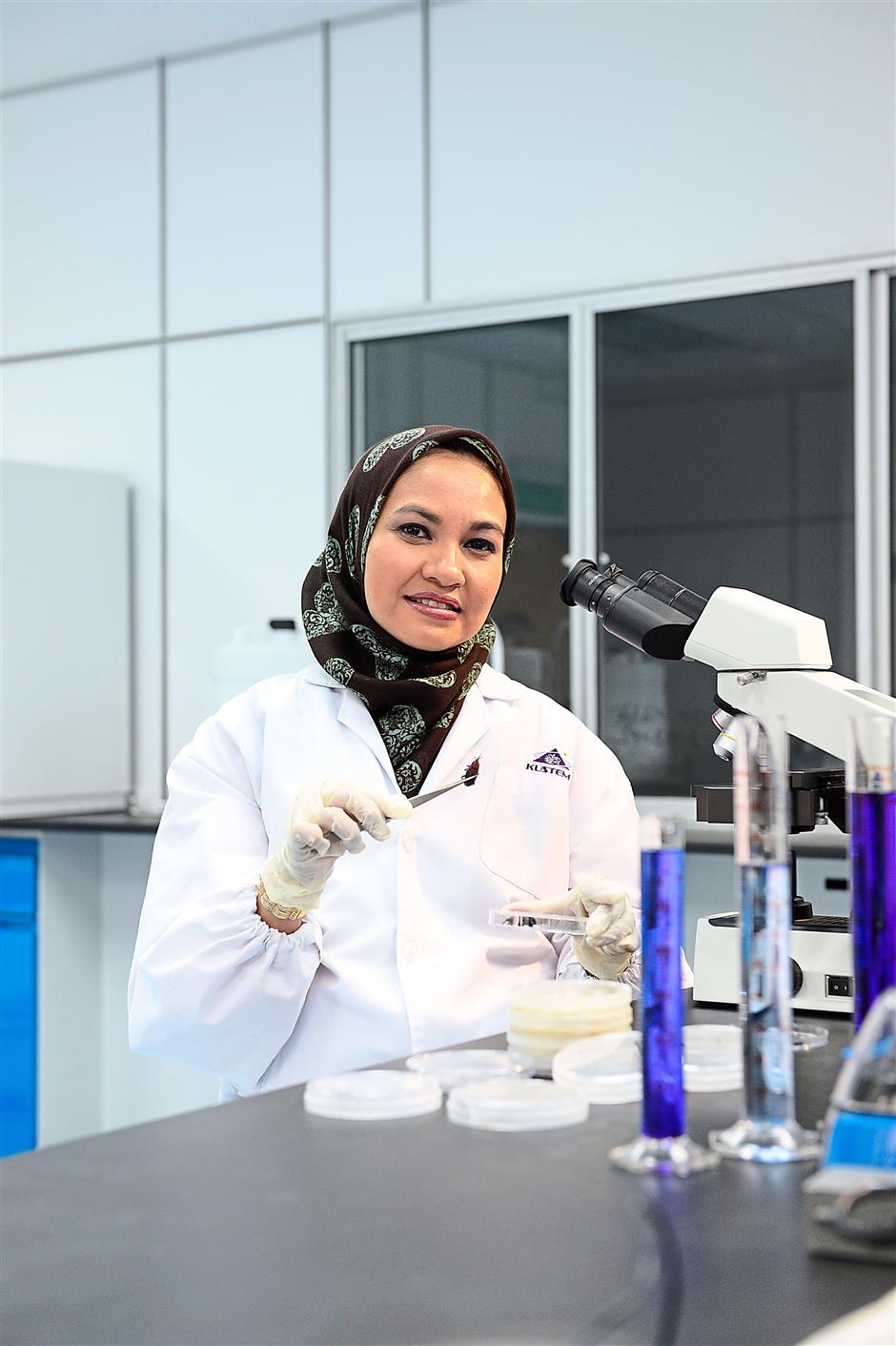 “I would go to the highly infested coconut plantations to collect soil samples and dead weevils, among other things, before returning to the microbiology laboratory in UMT where we do isolation and identification of the fungi, selecting the most pathogenic isolates and carrying out bioassays,” she adds.

Being a mother of three does not stop Dr Wahizatul from continuing her work, even though her youngest child is just three months old.

“It’s definitely a challenge being a mother and a scientist simultaneously. The secret and also the hardest part, I think, is knowing how to manage your time efficiently and effectively,” she continues.

She credits her husband Md Yuzeiry Md Yasin, an electrical engineer, and her extended family with helping with family life.

“I also turn to my colleagues and friends for advice when problems crop up at work as I think it is important to seek help and share our problems so that things are less stressful,” she adds.

Dr Wahizatul says she is proud to be one of the few Malaysian women who continue to actively pursue her career in the science fields, although many have sacrificed it for their families.

“The hardest part, I think, about being a woman scientist, is the lowered expectations of your seniors.

They just don’t expect as much from you, especially once you’re married, and that’s always tough to swallow,” she laments.

“I want to show that even though we are married and have children, we can still be world-class scientists, a lovely wife and a wonderful mother.”

“Recent Enterovirus A71 outbreaks have not only been limited to mild forms of Hand, Foot and Mouth disease (HFMD).

“This particular virus can also cause brain infections that may be fatal although the reason is not really known,” says Universiti Malaya (UM) Department of Medical Microbiology senior lecturer Dr Chan Yoke Fun, 39.

Her research into a cellular process known as autophagy to cure this disease, common amongst children, helped her receive the L’oreal-Unesco for Women in Science National Fellowship 2014. 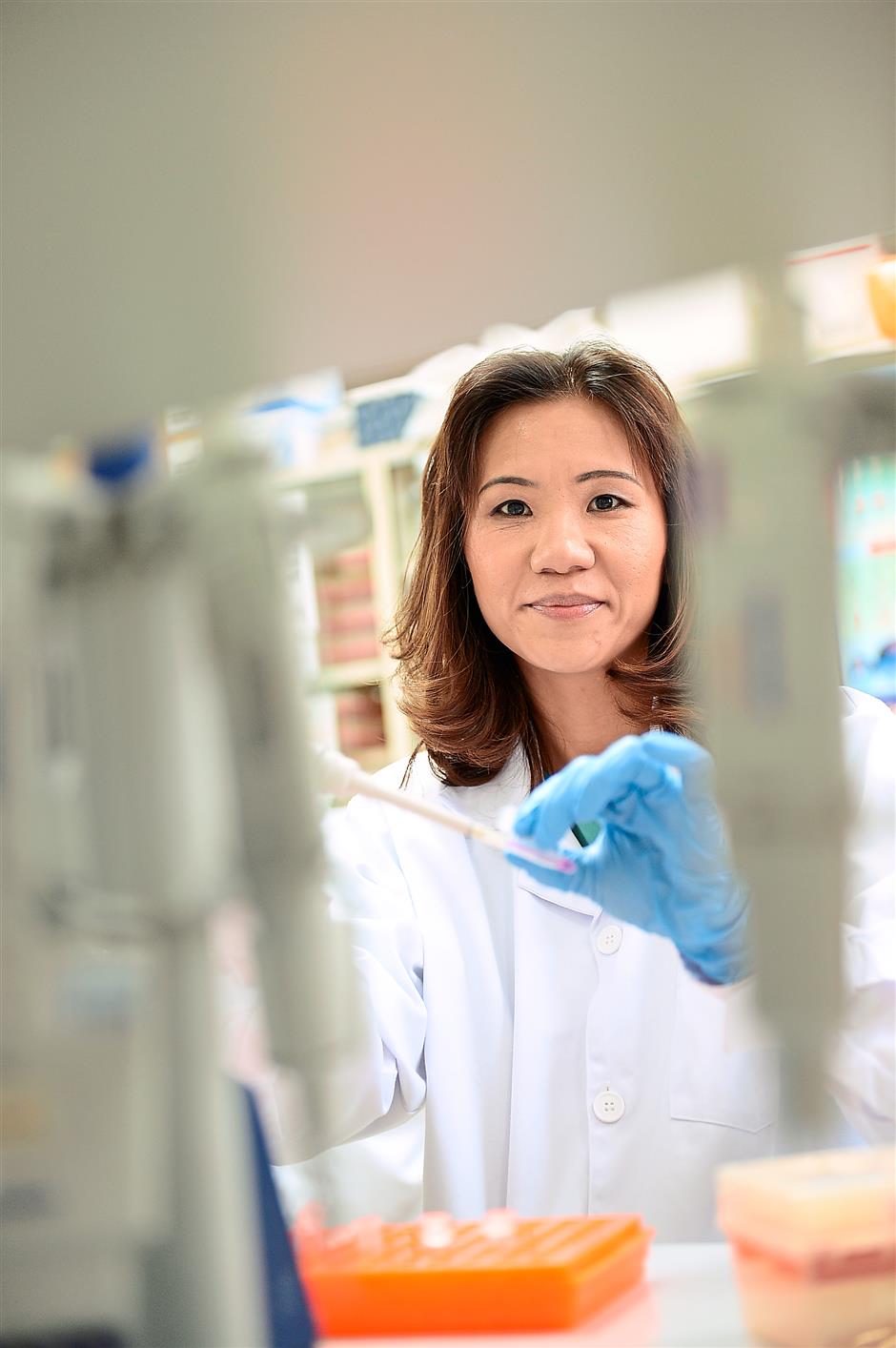 Viral warfare: Dr Chan is focused on developing a deeper understanding of the Enterovirus A71 and developing new therapeutic drugs to prevent it.

With the grant, Dr Chan says she plans to use it to buy chemical supplies for her work and to attend conferences to gain more knowledge on the subject.

To the uninitiated, autophagy, meaning “self-eating” in Greek, is a cellular mechanism where the cell releases enzymes to destroy itself or its components.

“In this case, cells ‘eat’ the viruses and put them in small bags. The virus uses this machinery to survive and even multiply. We are trying to block this autophagy machinery with protein drugs, which in turn will also block the virus, and cure the patient,” she says when asked to explain her research in layman’s terms.

Dr Chan first got involved with this virus while pursuing her PhD in virology and explains that her current research focuses on developing a deeper understanding of the virus’ ability to infect and developing new therapeutic drugs to prevent it.

“This disease is clearly a major public health concern with frequent outbreaks caused by Enterovirus A71. Thus, the continued efforts to develop drugs for prophylaxis or treatment are crucial,” she says.

Dr Chan also says that it took a lot of reading to identify the research area she wanted to focus on.

“You need to know where the information gap is and whether the research questions are worth pursuing,” she continues.

Being a woman in the sciences is no walk in the park, with women in this field having to don many different hats.

“I personally have to be a scientist, teacher, manager at work and, at home, a wife and mother,” she says, adding that each role requires her full dedication.

Dr Chan also says she has noticed the leaky pipeline model – the significant drop in the percentage of women in higher ranking positions – taking effect at her own workplace.

“Many of my highly-educated female friends gave up their careers because they opted to take care of the family.

“Malaysia does not have a flexible policy that allows for more female participation in the workforce,” says the mother of two tween girls.

She hopes there will come a day when there could be more options for women to help them better cope with family care and career advancement.

She is grateful, however, that UM has been very supportive and is striving to break in the top 100 universities by 2015 with their extensive involvement in research.

“The university is trying to help us by creating multi-tracks, so that those who like research can do more research,” she says.

“I am also fortunate to have a well-equipped laboratory in the university to work on the viruses.”

Although challenging, Dr Chan proudly says, “Science excites me. It pushes me to think out of the box and challenges what I think I know.”

Engineering can heal too

She has a PhD in Mechanical Engineering (Laser Processing), but has always harboured dreams of being in the medical field.

“I wanted to save lives. There is something cool about being in a lab coat as it represents the power to heal,” says Universiti Malaysia Perlis (Unimap) postgraduate programme chairman and senior lecturer Dr Noorhafiza Muhammad, 32.

Realising the alarming number of Malaysians facing or at risk of coronary heart disease, she saw a way to contribute towards helping decrease this scary statistic, all without pursuing an education pathway in the life sciences. Saving lives: Dr Noorhafiza may not be a medical doctor, but that hasn’t stopped her from trying to improve the survival rate of coronary disease patients.

Dr Noorhafiza explains that one of the currently favoured methods to treat coronary diseases is angioplasty – the surgical procedure to repair or unblock a blood vessel. Unfortunately, it is a procedure that is mostly unaffordable to the average Malaysian.

Thus, Dr Noorhafiza has focused her current research on developing a cheaper, yet just as effective method.

During her PhD years in the University of Manchester, she sent an image of a laser-processed stent she did for a research image competition.

“To my surprise, I won the Best Image Award and was acknowledged internationally. That was my starting point.

“I began to delve further into coronary stenting and used my knowledge in laser technology to solve the issue because it’s very interesting and could save more lives.”

“My research involves laser surface texturing of a metal stent,” she elaborates.

The stent, she says, is used to reopen a blocked blood vessel and ensure smoother blood circulation.

“With the current device, when you implant the stent, the blood vessel expands and creates a lesion (wound) on the wall of the vessel.

“If it doesn’t heal properly within six months, there will be issues with blood clot formation.

“Currently, to prevent blood clots, stents are coated with drugs, but this is very expensive,” adds the Kelantan native.

She explains that texturising the stent’s surface makes it more compatible with the body’s internal environment and allows better growth of new cells to seal the wound without complications.

She started work six years ago but has moved into the advanced stages, involving tests with human cells, about a year ago.

“It is quite complex as we first had to find the right type of biomaterial before testing out many different surface textures on the stent to see which one is the most suitable.”

The third recipient of the grant says she plans on using it to fund and further her research.

Being a lecturer in the school of engineering, she laments the fact that female students are the minority when they have the potential to contribute just as much to the sector.

Dr Noorhafiza says she is proud to be one of the few women in the male-dominated engineering sector, but points out that “being a woman is just one aspect of diversity”.

“The challenges are the same as for a man. I would say it is quite tough but we should not need to give up our femininity to be involved in this field,” she adds.

She goes on to say that the main challenge for any scientist is to obtain effective and beneficial outcomes to the issue studied.

It is hoped that the L’Oreal-Unesco for Women in Science programme will serve to inspire women already involved in the sciences, as well as female students whose interests lie this way, but may not receive the encouragement and help they deserve to pursue degrees and careers in this field. The three Malaysian women profiled above are sources of inspiration for future generations, beacons of female achievement at the highest levels of scientific research. 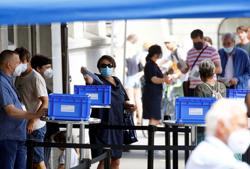