A MONTH-long research project on “Sexing goats through blood” with a Universiti Malaya professor, gave Wan Nadiah Wan Mohd Abdullah Yaakob, 19, the edge in getting into Harvard University.

It was her interest in biology that prompted her to approach the university's deputy dean of postgraduate studies Prof Dr Ramli Abdullah in October last year, said Wan Nadiah who sent the research paper to Harvard.

“He was very supportive, allowing me to assist in the research. It was very advanced, especially when I only had Form Five background of biology, but it did affirm my interest in the subject,” she told a press conference at the Malaysian American Commission on Education Exchange (Macee) last week.

The SMK Sri Aman student who scored 9As in the SPM examination was awarded a scholarship by the Public Services Department to do an American Degree Foundation Programme at the International Education Centre in Universiti Teknologi Mara (UiTM), Shah Alam.

Under the scholarship, she will receive US$32,000 (RM120,000) to complete a four-year undergraduate programme in the United States upon completing pre-university studies at UiTM.

She obtained excellent results for the American Scholastic Assessment Test (SAT), obtaining the perfect score of 800 for the oral part of SAT I and Writing in SAT II. In the Mathematics section of SAT I, she obtained 780 marks out of the full 800, and 740 in Mathematics 2C of SAT II. She also scored 770 marks in the Molecular Biology section.

“I didn't expect to be accepted (by Harvard) because a week earlier, my application was rejected by the Massachusetts Institute of Technology,” said Wan Nadiah who was also offered places at Yale and John Hopkins. She received an e-mail from Harvard on April 3 informing her of the good news.

Of the 15 students who were interviewed from Malaysia, Wan Nadiah is the only candidate who will join 1,650 freshies selected worldwide, in the Ivy League university for the Class of 2007.

Indeed, gaining admission into Harvard University is no mean feat.

According to Dr Goh Cheng Teik, the sole interviewer in the country for undergraduate admission to Harvard, Wan Nadiah displayed outstanding qualities in a student, having strength, character, and maturity.

“She possesses leadership skills and is active in various sports and extracurricular activities,” he said.

Competition is stiff for entry into Harvard; the university receives applications from students from about 5,000 schools worldwide every year.

While part of Harvard's attraction lies in its reputation as one of the most prestigious universities in the world, another reason is its financial aid policy.

Said Dr Goh: ''No student who succeeds in obtaining admission to Harvard is denied the opportunity of studying there on account of funding. He or she is assured of financial aid if his or her parents are unable to pay the full cost of studying there.

''Harvard's financial aid is usually in a package of scholarships, loans and term-time jobs. About 70% of Harvard undergraduates receive some form of financial aid from the university.''

Wan Nadiah is confident of achieving her ambition of becoming a biotechnologist. “Biotechnology is a relatively new field and there are lots of opportunities for growth in that area,” she said.

Wan Nadiah said she has no qualms about going to the United States for further studies in the aftermath of Sept 11.

“I was apprehensive after the Sept 11 incident, but I believe Americans are intelligent and open-minded enough to be tolerant and respectful of other races and religion. In fact, I had made it clear in my admission letter that I am a Malay and a Muslim, yet they accepted me,” she said.

Wan Nadiah credits her parents for their constant support and inspiration in her life.

Her mother, Juliana Low Abdullah, 46, said though she gives her children leeway to pursue their interests, she is firm in some areas.

“I unplug the television set from Monday to Friday and I do not believe in buying the PlayStation for my kids,” says Juliana, whose three sons are 20, 15, and 10 years old.

Only National Geographic and news channels are allowed at home, while Music TV and movie channels are locked as they are deemed to be addictive.

As a result, Juliana said her children have cultivated the reading habit and found other useful things to do with their time.

“ I don't push them to do things they are not interested in. I'm a very unorthodox mother,” she added.

Wan Nadiah will be leaving for Harvard in September, together with Adrian Ow Yung Hwei who was offered admission last year but was unable to obtain his visa on time. 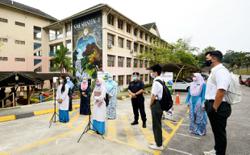 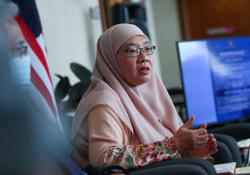 Dr Mah: Decision to allow only SPM, STPM students to return to school 'balanced'
Public exams to go on as planned
Covid-19: Quarantined SPM, STPM students will be allowed to defer exams, says Education Ministry
Culinary away from the kitchen
Back to school – one way or another
Traders selling school uniforms feeling the pinch
First day of school – at home
Deferment of loan repayment process will be smooth and easy, assures PTPTN chairman
400,000 students return to school for physical classes
Orderly first day back for Form 5 students at Kuching school