Where M’sian Top Guns are trained

IT COULD be the look of an aerodynamic shape, or simply the engineering marvel that keeps a young boy’s eyes glued to the aircraft that speeds through the runway before lift-off.

But for air force Major Saravanasennan R. Veerasennan, who had his sight fixated on becoming a pilot, his interest was to fly the aircraft.

Today, not only is he a pilot, but he is also an instructor of military pilots.

“I have always been a passionate student of science, particularly aircraft and rocket-related technologies,” he told StarMetro.

Recollecting his younger days, he said he was selected as one of 60 cadet officer candidates after a stringent selection process of more than a thousand candidates to the Royal Malaysian Air Force (RMAF) College in Alor Setar in 1997 as the first step to realise his dream.

After graduating with a diploma in aeronautical engineering, the next phase of challenge began where he put his knowledge to test and his hand to the yoke, or known as a control column used to piloting fixed-wing aircraft in the No 1 Flying Training Centre (1 FTC) or known as PULATIBANG 1 among the military fraternity.

Known as the “home where Malaysia’s military pilots are born”, the centre celebrated its golden jubilee on Aug 23.

Air Force Chief General Tan Sri Rodzali Daud congratulated the pioneers of the flying school who had grown it to what it was today.

“I am proud that the school has passed the test of time and raised to a respected level of capability, professionalism and readiness of what we witness today,” he said.

After relocating from Kuala Lumpur to the RMAF Base in Alor Setar in 1964, the early days of the centre was mainly staffed with officers seconded from the Royal Air Force from England.

Captain John F. Woodard (Rtd), the first commanding officer (CO) from July 1, 1964 to Jan 1, 1966, who was present at the event, shared his experience of Malaysian hospitality and its determined pioneers to build the centre.

“I remember being invited to the officers’ weddings. It is an eye opener to see the different cultures and how different races hold their weddings,” he said, proud to see how the place had grown.

“I need people to believe that they are in a professional air force, and are passionate that we will succeed,” he said in an interview.

Rodzali said there were plans to add five more planes by year-end.

“Since 1966, 1,200 pilots have graduated from here. This include pilots for other services, namely the army, navy and also pilots from foreign air forces such as Bangladeshi Air Force and Indonesian Air Force” said Rodzali.

The pilots would then further their training in different squadrons that operated various planes, from transport aircraft, fighters to helicopters.

Rodzali further added that the challenges for the air force in the 21st century were unpredictable and military campaigns demanded an agile air force that is capable of conducting a wide range of military operations in various dimensions, from peace time and conflict, local or abroad and conventional or unconventional warfare.

Current CO Colonel Yee Yit Hong said the instructors evaluated their students, not just from the flying perspective, but also their social and psychology among other aspects.

He added that knowledge, skill and attitude remained key elements of what made a professional RMAF pilot.

“We maintain stringent standards and at the same time do our best to understand the student as a whole and go all out to assist them to the best of our ability,” he concluded. 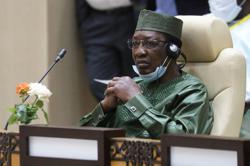