SEVERAL local authorities have agreed to come together to tackle the on-going illegal dumping problem and put an end to peat fires at the Sungai Kelang riverbank in Taman Sri Manja in PJS3, Petaling Jaya.

The illegal dumping of waste and the peat fire issue requires the joint cooperation of all parties to tackle the matter and 30 representatives from the various agencies, were positive about resolving the issues together.

Haniza said she was glad that all parties were serious in handling the issue and hoped the agencies involved would support the other, and resolve the matter quickly, to ease residents’ worries.

“Smoke from the peat fire irritates the eyes and residents in Taman Sri Manja and Taman Medan are suffering.

“With the continuous burning and the release of toxic gas, I fear for their health,” she said.

Haniza said she would write to the land office to declare the peat fire situation as a ‘natural disaster.

“The peat fire has not stopped since early March and this has led to health complications. This is serious matter and we need to move fast,” she said.

Haniza said the land office would need to ascertain the status of the land at the riverbank as some occupants had Temporary Operating Licence (TOL).

“We want to clear the riverbank from all illegal activities and to do so, we need to be sure of the land status,” she said.

The fire station together with DOE, she said, would conduct a test on the gas emitted from the peat fire.

Thirdly, a request has been made to DID to place barriers at the illegal dump site, to prevent further activity.

“We hope 5,000kg boulders will be placed at the entrance to the dump site,” she said adding that Penchala fire station chief Zaidi Ahtan said his station had put out fires at the PJS3 site 15 times since January.

“Sometimes it takes 24 hours to put out the peat fire and it is dangerous.

The situation is bad and has affected the health of some of his officers.

“Each time when we get a call, we rush to the site and put out the fire. Three of my firefighters were admitted in the hospital due to the side effects of over inhaling smoke from the peat fire.

“We are not complaining but we hope the issue is tackled soon, otherwise we will be wasting our resources,” said Zaidi.

The riverbank at Taman Sri Manja, Petaling Jaya has been subject to continous peat fire since March.

In February, StarMetro reported that parts of the riverbank at PJS3 and PJS4 was, for over a decade, used as an illegal dumping ground for construction waste. Most of the ‘unwanted’ waste was dumped into the river at night and the activity continued on, as the authorities were slow to resolve the matter.

Later that month, firefighters had to deal with a fire at the dumpsite, which took them nine hours to douse the blaze.

Besides the dumping of the construction waste into the river, scavengers contribute to the problem by burning rubbish at the riverbank.

Taman Sri Manja Flats Resident’s Association chairman Sabtu Atan said residents were directly affected by the peat fire as the three-block flats were 200m away from the site.

“The wind blows the smoke in the direction of the flats and it gets worse at night.

“This has been ongoing for about two months and we have been inhaling hazardous smoke.

“Our clothes which we hang outside to dry, also smells of smoke,” said Sabtu adding that the rubbish was most likely burned at night.

Mohammad Ibrahim, 66, who has been living at the flats for over 10 years, said the smoke from the peat fire was causing health problems to his children.

“Some of my children are coughing non-stop after inhaling the smoke.

“It is a health hazard to the residents here, especially those who have asthma, as this will worsen their condition. 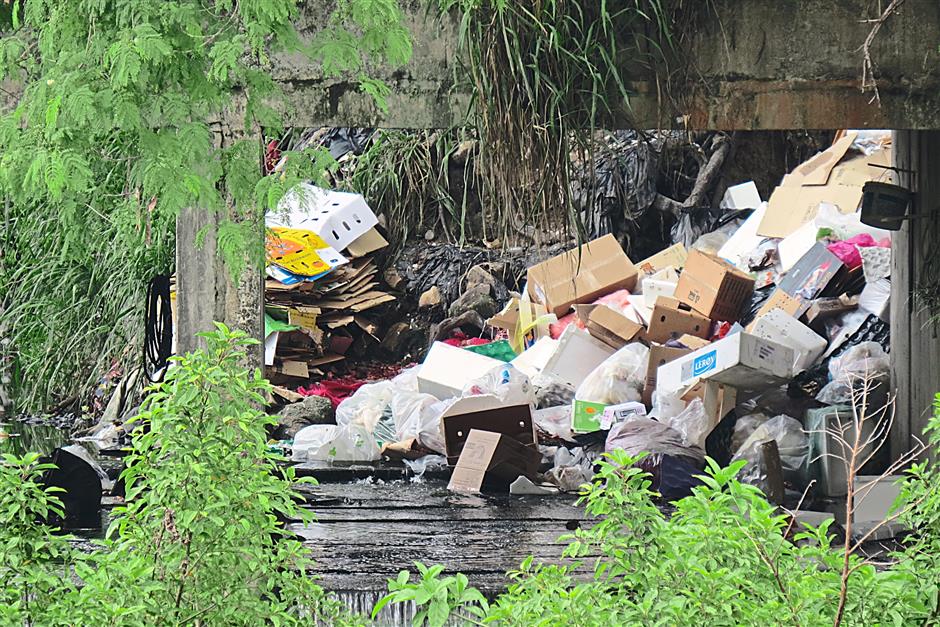 Items such as cardboard and polyester boxes thrown into the Kelang River from the PJS3 Petaling Jaya side.

“Authorities should come together and address the problem once and for all,” he said.

Residents were also furious that the dumping of bulk waste has not stopped.

A factory manager in the area, who wished to remain anonymous, said the dumping of waste even took place during the day, nearby his factory.

“We have witnessed lorry loads of construction waste being dumped beside our factory, almost on a daily basis.

“We have even seen lorries bearing the MBPJ logo that comes here to dump waste.

“We do not dare confront the culprits as we fear they may retaliate.

“We are thankful to StarMetro for highlighting the plight as most of the residents and legal business owners are tired of complaining to the authorities.

“We hope there will be an end to this pollution,” he said as he shared some photographs taken of the dumping activity.

The factory manager added that since early March, the culprits had been seen burning the rubbish too.

This resulted in peat fires in the area, and even factory workers were said to be suffering from breathing difficulties because of the smoke. A pile of logs seen by the Sungai Kelang riverbank during the site visit by the authorities.

“I hope the state government will take the lead and put an end to this situation.

“We realise there are a lot of government departments involved in tackling the decade-old problem.

“If there are many departments involved, would it not be easier to overcome the problem instead of playing the blame game?,” he asked.

Based on public complaints over the acrid smoke, StarMetro staked out at the area to observe and get an idea of how the peat fire had affected residents.

The peat fire continued to burn non-stop during the seven hours we were there.

The burning took place behind a shack, believed to be an illegal waste dumping station, and the route to this area was secluded from the main road.

In the afternoon, children could be seen loitering at the site.

However, entry to the larger waste dumping site in PJS3, Kampung Medan, was restricted with drum barriers, controlled by a group of illegal operators.

The entry to another illegal dumping site under the Kesas highway, was also blocked with boulders.