CYBERJAYA is on the cusp of exciting times ahead. The Multimedia Super Corridor (MSC) branded city has found itself being thrust into the spotlight of late, and for all the right reasons.

Garnering support from no less than 21 established developers coming together to develop their properties to the tune of a total investment of approximately RM20bil, the viability of Cyberjaya as a place to live, study, work and play is becoming more convincing by the day.

Banding together with Setia Haruman Sdn Bhd, the master developer behind this township, a group of seven established developers comprising UEM Sunrise Bhd, SP Setia Bhd, Emkay Group, Glomac Bhd, Paramount Property Sdn Bhd, Areca Properties Sdn Bhd and MCT Consortium Bhd, are confident that their respective properties will be able to woo the market at the upcoming Cyberjaya Premier Property Showcase (CPPS) 2014 scheduled to take place over the weekend of April 19 and 20, from 10am to 6pm at the Cyberview Resort & Spa, Cyberjaya.

Each of the eight developers, including Setia Haruman, armed with a different unique proposition for their residential and/or commercial developments, are putting up a strong show of solidarity for the two-day event to promote their respective properties.

“The success of the two previous showcases, have spurred us on to continue hosting CPPS 2014. Last year’s showcase by eight developers generated over RM50mil in sales,” shared Setia Haruman head of sales and marketing Liew Yeon Keong. He targets an additional increase of 20% from last year, since property values have gone up.

“Potential property owners and investors will find a large variety of properties on offer from top developers known for their quality, great concepts and innovation in residential and commercial units. This is yet another endorsement of the high confidence that we have in Cyberjaya and we are able to come together as a cohesive unit to take it to even greater success,” he opined.

The total gross development value (GDV) of properties being promoted by all eight developers at CPPS 2014 is RM11.38bil.

“Everything is connected in Cyberjaya. When we sell land to the developers, the turnaround time for the basic infrastructure is already in place so all they need to do is to connect with the available state-of-the-art multimedia broadband and security camera features. 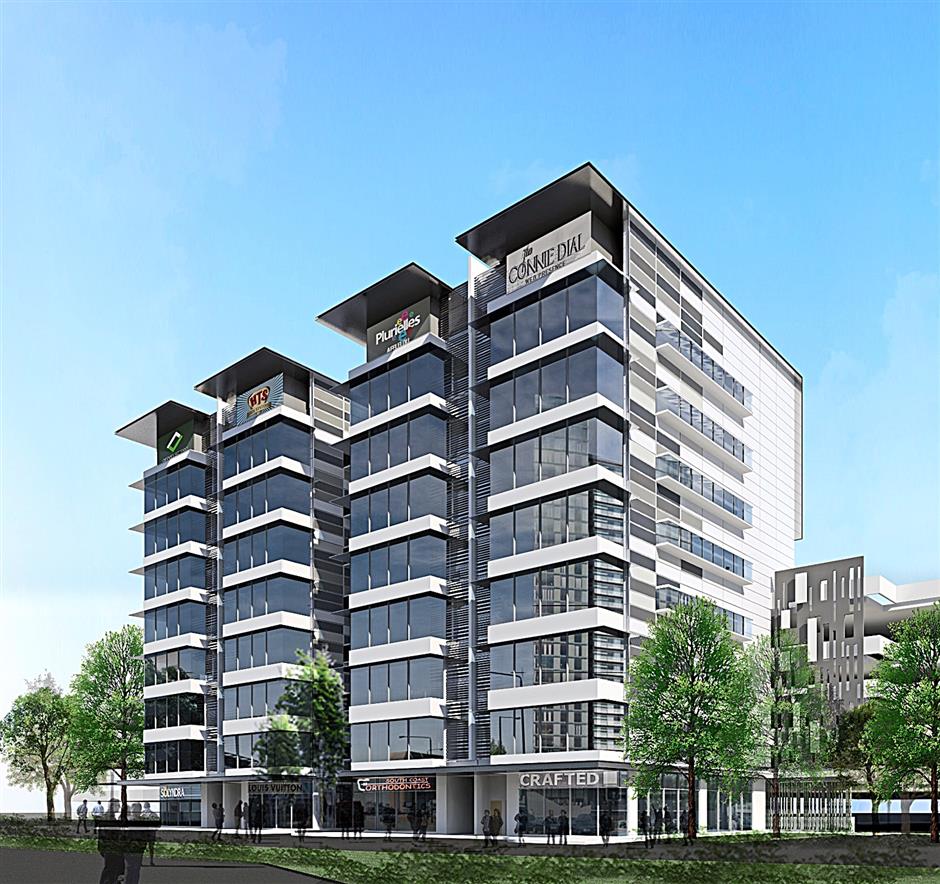 “We will showcase our properties together with the rest of the developers under one roof. Being the master developer, we look at the bigger picture to ensure that all the developers are happy, so this will add to the value of Cyberjaya eventually,” commented Liew.

He said Cyberjaya will be home to landed properties including terrace houses, semi-detached units, bungalows, Sohos (Small office home office) as well as serviced apartments and condominiums besides commercial properties and other elements of shopping malls, offices and shop offices.

“Looking at the many projects’ themes and concepts, Cyberjaya will not lack innovation,” he said.

The targeted increase in population to 100,000 by 2016 bodes well for this township with 36 multinational corporations, over 800 corporations and 190 eateries operating here with six shopping malls currently being planned.

“At Setia Haruman, we will be launching our projects this year, comprising Ceria Residence with 150 terrace link houses priced below RM900,000, and 350 units of medium-cost condominium units priced around RM600,000 per average unit. We will also be targeting the masses with affordable housing units priced between RM300,000 and RM400,000.

“Besides Gardenview Residence, a low-rise gated and guarded condominium located on 5.6 acres of prime freehold land, there is the CBD Perdana 3 mixed development, which will comprise different components including Phase 1 of the Centrus Mall, Phase 2 of the supermarket gourmet garden, retail lots and 400 units of Centrus SoHo2,” said Liew. 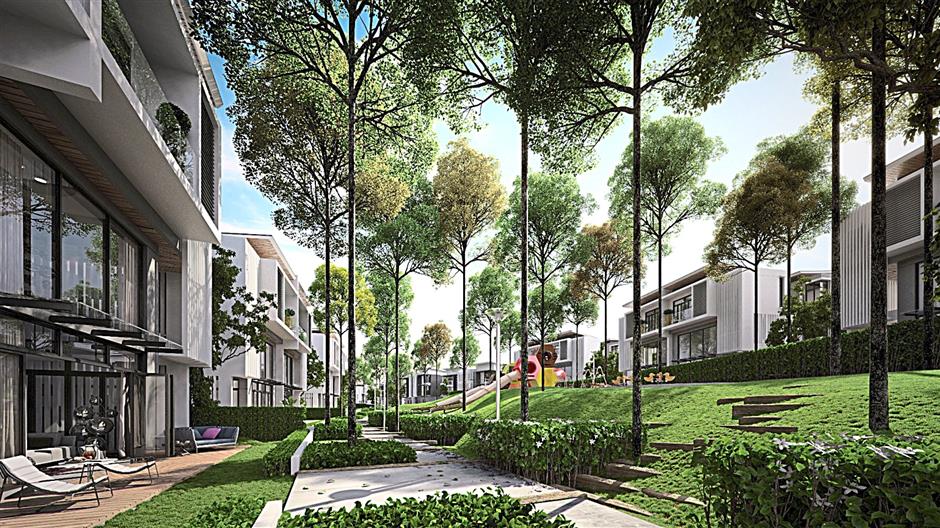 “Developers of greenfield projects usually have to forge new territories to introduce new properties — we build the amenities and infrastructure to attract the population base, before moving on with commercial components to create job opportunities and economic activity. But here, it is actually the reverse situation. MNCs like Shell and the government agencies are already here; what better and more conducive amenities could we ask for? The infrastructure has been given to us on a silver platter,” he said.

“Now, the residential component sets in. The population, made up of professionals working in the IT (Information Technology) industries and education institutions, were already here. What they needed were homes.

“As a maiden developer in Cyberjaya, our RM900mil GDV freehold Sejati Residences with its concept of bringing the outdoors in and providing lots of parks and green lungs caters to that. Our superlinks were fully sold at launch, while the semi-detached units have experienced a 70% take-up rate. Our recently launched bungalows, priced at approximately RM3.2mil are already 40% sold.”

He believes that Cyberjaya has a lot going for it, with the Maju Expressway (MEX) and other highways providing a connection to Kuala Lumpur in 25 minutes, because principally, the business centre is there.

“Cyberjaya is in many ways similar to Kota Damansara. If you do your research, the Selangor State Development Corporation (PKNS) was the master developer which planned and parceled out land there simultaneously to other developers. Each developer had a market niche — commercial or residential, and their combined efforts accelerated the maturity of Kota Damansara.

“What would have organically taken 20 years to develop, or for one developer to slowly harvest, was actually developed in five to 10 years. So, with the combined effort, any masterplanned township will be able to grow and develop at an accelerated pace,” he noted, highlighting Cyberjaya’s potential. Glomac Bhd general manager Abdul Jami Shaik concurred, saying that the 100% sold out first phase of Glomac Cyberjaya which consists of 63 units of three and three-and-a-half storey shop offices previously sold from RM313 per sq ft have shown good rental and capital appreciation. The second-phase units launched in 2012 are priced between RM1.3mil and RM3.8mil (from RM393 per sq ft) and have about a 70% take-up rate.

“At Glomac, we understood a long time ago that for us to sell Cyberjaya, we had to bring people here to our sales gallery and site office as it’s a new township. So, the launch has to be done in Cyberjaya,” he said.

Areca Properties executive director Aidan Hamidon shared that the showcase is its first chance to present its Areca Contempo Homes with a total GDV of RM1bil to be developed in phases.

“We’re hoping to capture the market’s imagination with a 45-acre manmade lake which will provide a really nice setting for our 700 units that will be developed over the next three to five years. We are planning our first phase and are now securing registration.

“What we are designing are ready-to-move in, gated and guarded landed, low-density freehold homes with an open layout plan for people to personalise and allow for minimal renovation. We’re also happy to call Bosch — one of the leaders in home solutions — our partner in this project to provide fully equipped, integrated kitchens for our Areca Contempo Homes.

“Cyberjaya is very close to maturing as a neighbourhood. D’Pulze is the first commercial development coming up, so along with Shaftsbury Square, the nightlife will come in,” he said.

“Eco is in at the moment. Our mixed development in Symphony Hills located near the Multimedia University launched in 2010 comprises 416 landed units. We will be launching the limited, remaining units for the Schubert terraces, Beethoven garden twin villas and coming soon, will be the second block of Verdi eco-dominium,” he said.

Participating for its third time at the showcase, MCT Consortium Bhd general manager Teoh Eng Poh said that its LakeFront Villa Cyberjaya comprising landed zero-lot bungalows priced between RM2mil to RM3.8mil or RM490 per sq ft units will be showcased alongside its Brasenia@LakeFront Cyberjaya freehold condominiums.

“Setia Haruman has done the fundamentals already. So developers can just start launching without worrying about the infrastructure,” he commented.

“In this upcoming CPPS, we will be showcasing different types of properties for rent and sale. We will also be showcasing the last few units of our Domain 5 apartments and Corporate Park@Star Central featuring the semi-detached en bloc office tower development targeted at small and medium enterprises.

“We will also be introducing our future shop office development within the MKN Embassy Techzone mixed-development.

“The Eco Glades township has a sales value of about RM3bil. We will be introducing the Eastern and Western, Baba Nyonya modern heritage design priced from RM1mil to over RM3mil of which we have sold approximately 50% of the units,” said SP Setia Bhd general manager Pipah Mohd Nasir.

“Our target market is the new multimedia companies and the rest of the target market is already in our database. We are looking at the scenario in the market and our approach must be different from last year,” she said, commenting on how “Bali has been flown into Cyberjaya” during the third phase which is fully sold, while the fourth phase will feature English-inspired designs.

“We are building an interchange to Setia Haruman with direct access to the MEX Highway. We are also putting in our own community mall so Cyberjaya will be a fully completed township.”