KUCHING: The DAP has expelled Pujut assemblyman Fong Pau Teck (pic), allegedly over an act of insubordination to the party’s directive.

The party has given him 14 days to appeal in writing against the decision. 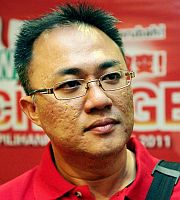 If the appeal is rejected, the number of DAP representatives in the Sarawak state assembly will be reduced from 12 to 11.

Sarawak DAP chairman Chong Chieng Jen confirmed that the party’s disciplinary committee had sacked the Pujut assemblyman for going against the party in the May 5 general election, in which the DAP won six parliamentary seats in Sarawak.

Chong said Fong had been defiant of the state committee’s decision to field Miri DAP women’s wing head Eunice Lim for the Miri parliamentary constituency in the polls.

In Kuala Lumpur, DAP deputy chairman and head of the party’s disciplinary committee Tan Kok Wai issued a statement to confirm that Fong had been sacked, adding the decision was based on the fact that he had “displayed various acts of disobedience and breaching party discipline on many occasions”.

“Fong’s refusal to pay the mandatory monthly contribution to the party and the arrears owing to the party as a result of the increment in the allowance for Sarawak state assemblymen constituted an act of insubordination to the party’s directive,” said Tan.

“Therefore, the committee found that Fong has set a bad precedent, which is unpardonable and as such, the disciplinary committee has reached an unanimous decision to expel him from the party,” he said.

Meanwhile, Fong when contacted for his reaction yesterday, replied through a text message saying “no comment at the moment”.