KOTA KINABALU: Sabah Tourism, Culture and Environment Minister Datuk Masidi Manjun has suggested the use of nuclear energy if bio-fuel or hydro energy cannot meet the current needs of the state's 2.7 million people.

Masidi even suggested the Japanese “cool dressing” method for civil servants as the state stands at a crossroads in choosing energy sources on World Environment Day. 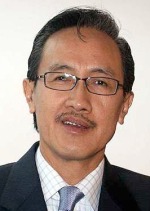 In an interview, Masidi talked on issues faced by this part of Asia in view of the United Nations slogan: Kick the Habit! Towards a Low Carbon Economy.

He felt that coal, no matter how “clean” it may be, should be the last resort of Tenaga Nasional Berhad (TNB) in the face of global warming and climate change.

The outspoken state minister said it was time for Malaysia relook its policy on the use of nuclear power.

Coal, oil and gas are known to be the greatest contributors to carbon emissions,” Masidi said, while Sabah decides on TNB's proposal to build a 300MW coal plant in the state.

“We have to look at environment-friendly technology. We have the expertise and we are a responsible country that does not abuse its sovereign rights,” said Masidi, who believes that viable alternatives can be found.

He said the United Nations Development Programme (UNDP) named Malaysia as the 26th largest emitter of greenhouse gases and the 38th best in sustainable environment management of the world's 146 countries.

“Malaysia makes up 0.4% of the world’s population but its 27 million people account for 0.6% of global emissions,” he said, adding that though the country practised sustainable environment management, it should not rest on its laurels.

Admitting that the state was guilty of emitting smoke from trees and soil during forest clearing, Masidi said, since 1989, the state had committed 16% of its forests to be totally protected.

“The challenge is that Sabah is providing a global service by keeping its carbon stored, and there are mechanisms whereby the state can be compensated for this,” he said, adding that the state worked on carbon credit sales in this global service.

As Sabah marks World Environment Day, Masidi is keen to get his cabinet colleagues and government ministers to try the “cool biz attire code” that encourages the ridding of ties and use of short-sleeve shirts to reduce air-conditioning.

Among awareness programmes of his ministry are the promotion of tree planting (one tree can absorb one tonne of carbon) and giving grants of RM1,000 and RM3,000 to schools and NGOs to carry out environmental programmes on World Environment Day.

“The Environmental Action Committee is collaborating with local authorities to promote composting of kitchen and garden waste and recycling,” said Masidi, who believes that concerted efforts by the public and private sectors can achieve sustainable environmental management.

“It is a common responsibility of all citizens in this planet. So, it is for all of us to play our parts,” he added.