Gasing’ spinning popular with all races

The Government’s plan to popularise top spinning (main gasing) as one of the folk games (sukan rakyat) in the country can be realised as seen from the efforts taken by Persekutuan Gasing Malaysia (Pegama) in organising the National “Gasing” festival held at the municipal field in Temerloh recently.

A total of 365 participants from all over the country (except Kedah) took part in the three-day main gasing competition.

According to the Pegama president Datuk Ismail Sabri Yaakob, who is also Bera MP, top spinning has a long history in the Malay society and is played by all ages.

He said the national level competition had been held since 1990 and the objectives among others, was to conserve, develop and expand the art of the game, so that it would not disappear from the society.

Ismail Sabri said currently, the game was played by all races and Pegama planned to organise more competitions in the future, including at Asean level.

He said the competition at Asean level was once held in Temerloh, a few years ago and was successful.

“With our experience in organising these competitions, I am sure more people will be fascinated by the game in the near future,” he said.

Meanwhile, Deputy Culture, Arts and Heritage Minister Datuk Wong Kam Hoong, who was present during festival said main gasing would be among the folk games that would be gazetted as a national heritage.

However, he said, non governmental organisations should help the Government to bring all kinds of sukan rakyat -including top spinning - into the mainstream of sports activities.

Wong said since the game had followers among non-Malays, it could help to promote unity in the country.

She said Pahang had two main gelanggang (fields) for the game to be played namely in Temerloh and Kuala Krau.

Gasing comes in several types and sizes depending on the cultures in the various states such as gasing begelan (popular in Johor), gasing toyol (Malacca), gasing kuno (popular in Kelantan, Terengganu, Pahang, Selangor Kedah and some parts of Johor), gasing tanjung, gasing pacitan, gasing lang laut and gasing uri.

In the competition, Selangor was the overall champion in both the adult and youth categories, while host Pahang was the first runner-up in the adult category. 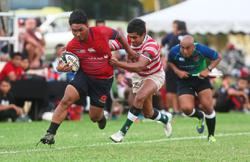 Asia Rugby cancel all competitions for the year