The first day of MCO 2.0 in Johor Baru was not as quiet and deserted as it was during the initial days of the first MCO last year. — Filepic

If Malaysians continue to do their part, normalcy may return as it has in Singapore

A wave of panic could be felt in the air when the first movement control order was announced in March last year.

The two days before the MCO was a busy time for many as they rushed to beat deadlines and make last-minute preparations to adhere to the restrictions that came along with the cordon sanitaire.

Several roads around Johor Baru, including those leading to the Singapore-Malaysia Causeway and Second Link, were unusually busy in the final hours before the clock struck midnight on March 17 last year.

However, the atmosphere completely changed on March 18 as people stayed indoors to prevent the spread of Covid-19.

The busy sight just a few days earlier vanished and the once bustling Johor Baru became empty and quiet, probably for the first time.

I was expecting a similar sight this year when the MCO was once again announced for several states in the country, including Johor.

However, to my surprise, it felt normal this time around.

The city remained busy as if nothing had happened.

While the total number of cases in early January surpassed 100,000 compared to fewer than 1,000 during the first MCO last year, the reaction towards the spike in numbers is different this time.

There is a sense of hopelessness among many, especially as they have been forced to change their way of life for almost a |}year.

Malaysia was successful in its efforts to flatten the Covid-19 curve during the initial implementation of the various stages of the MCO, evidenced by the number of daily cases being mostly two digits between April and early September.

However, the togetherness that the public showed in battling the disease slowly ebbed away, probably partly out of frustration over the Sabah elections going ahead despite an increase in cases there.

Johor, which only had single-digit daily cases, has now become the top four state with the highest number of cases consistently for the past couple of weeks.

State health and environment committee chairman R. Vidyananthan, however, said the compliance rate for the standard operating procedures was high.

“People are more aware this time and are used to the new normal, unlike during the first MCO.

“Although there seems to be more people out of their homes, compliance with the SOP is high.

“Part of the reason why more people are on the streets now is because more essential services are allowed to operate this time around, ” he said.

As of Jan 24, the SOP-compliant rate stood at 97% with 41 individuals issued with compound for failing to adhere to the SOP.

Two more clusters were detected in the state with a total of 64 active clusters as of Jan 24.

It is too early to see the results of the latest MCO and only time will tell if our efforts will bring us closer to the end of the pandemic.

But the success of neighbouring Singapore provides a glimmer of hope.

While Malaysia was experiencing a low number of cases in April last year, the island republic experienced a spike with over 1,000 cases daily being reported.

Among the measures taken by the government during the height of the pandemic was to shrink its list of essential services and reduce crowds in popular markets by restricting entry based on the last digit of an individual’s National Registration Identification Card (NRIC) or Foreign Identification Number (FIN).

Today, just months after ending its circuit breaker measure, the island republic is reporting a low number of new cases and is able to gradually bring a sense of normalcy back to its people.

We have seen similar success in Malaysia previously and there is hope that we can once again flatten the curve if we show the same sense of solidarity we once had. 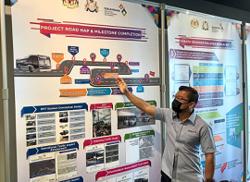 Go green, go easy on your wallet
What it takes to be a journalist
When poor upkeep of facilities affects public
‘Protect vulnerable maids’
Empower people in new norm
Combating infodemic in a pandemic
CNY celebrations must go on
MBPJ should give ratepayers alternative to checking and paying bills online
Proposed PJ Dispersal Link route similar to scrapped Kidex
Low-key CNY plans in new norm