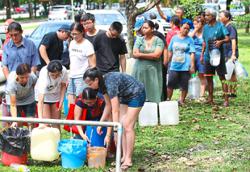 In Taman Bukit Kuchai, Puchong, residents had to line up under the hot sun and later got soaked in the rain as they waited their turn at the static filling station set up by Air Selangor. — GRACE CHEN/The Star

Who will foot bill for hardship borne by consumers in latest unscheduled water cut?

CONSUMERS are still seeing red after the Sungai Selangor Phase 1,2 and 3 and Rantau Panjang water treatment plants were shut down without notice due to odour pollution.

While some areas got their supply back within three days, others had to wait almost a week.

Those who did not have time to store water, discovered that it was possible to take a bath with the same amount that it takes to fill a toilet cistern.

There were also those fortunate enough to be able to go on impromptu staycations and getaways to escape the discomfort of the water disruption.

But for residents in PPR Batu Muda, Jalan Ipoh, who had dry taps for five days, bottled water was a luxury.

A 66-year-old resident recounted how some in desperation took water from fire hydrants after the reserve tanks dried up.

“Meanwhile, the residents who had fetched water earlier had used up their supply. So, the queue at the Air Selangor emergency tanks was never-ending, ” he said.

One resident who had just delivered a baby, had to rely on her husband to carry water up to their unit on the eighth floor.

It was fortunate that all the lifts servicing the people’s housing project’s 17 floors were in working order.

When the water returned to consumers’ taps again, the residents said they were the last to receive supply.

Annoyed, one of them went to the management office, only to be told that there was nothing they could do.

Luckily, the complainant who had plumbing experience, pointed out that after so many days air would have entered the pipes and that it would be necessary to release the air pockets so that water could be pumped to the units.

Only then did the management office call in a maintenance team to fix the problem.

The entire episode, said a resident, was one disappointment after another.

Not only did the static water stations arrive at each block on the very last day of the water cut, residents who were not used to accessing information online were left in the dark as to where they could access clean water supply.

As one restaurateur in Petaling Jaya put it, the inconvenience, hardship and extra cost brought on by the unscheduled water disruption could be likened to an unforced error.

Though the restaurateur had to shut his eatery over the weekend, he revealed that

he could not cancel a prior booking as the guest had already paid a deposit for a party of 25.

As they were ordering a la carte, he did not dare open his restaurant to the public as their reserve tank was close to drying up.

But to cater to this group, he had to spend close to RM900 on bottled water, a cost which ate into his profit margin.

Couldn’t he pass the cost to the customer?

Not possible, he said. Though he could have cited the water crisis as a reason, he explained that doing so would have left a sour taste and ultimately translating to bad business.

This is only one restaurant. Many more outlets had a similar story.

Multiply that and the sum incurred for contingency water plans, not to mention the loss of revenue, and one would have ended up with a substantial bill indeed.

All this could have been avoided if only the authorities had taken the job of securing the country’s precious commodity seriously.

Over in Taman Bukit Kuchai, Puchong, residents were seen stoically lining up under the hot sun and later getting soaked in the rain as they waited their turn at the static filling station set up by Air Selangor.

Perhaps, this is what the higher-ups should experience so they can have a better grasp of what ordinary people have to go through in such situations.

No doubt the business of heading to water filling stations or public standpipes and then carrying the filled containers back home was temporary.

It is fine if one was young, strong and healthy, said one mother of three whose grown children had come along to help with the heavy lifting.

But what of the old, sick and disabled, she asked.

Until the authorities can come up with a proper action plan to curtail unscheduled water cuts, it is best that every household has enough containers to store water.

It would also be good if arrangements could be made for water tankers to carry out door-to-door distribution.

Perhaps that may help assuage the disgruntled sentiment which is still thick in the air. 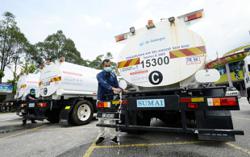 Empower people in new norm
Combating infodemic in a pandemic
CNY celebrations must go on
MBPJ should give ratepayers alternative to checking and paying bills online
Proposed PJ Dispersal Link route similar to scrapped Kidex
Low-key CNY plans in new norm
Give CNY celebrations a miss!
Contented in city of Seremban
Solidarity key to flattening curve
Hang in there, Penangites!