Be open to opinions

Silencing people with weapons and legislation is not the answer

IT IS only a few weeks into the new year, and already, we have had enough sadness to last us a year...maybe even a lifetime.

That lives are being taken away at the whim of some people (or an organised group for that matter) for pracitising something they believe in, doing their job or just, well, existing, is nothing short of a tragedy.

I am referring to the horrifying murder of 12 people — journalists and police officers — at the Charlie Hebdo office in Paris, France, but the same could be said of the reported attacks by Boko Haram in Nigeria shortly after that where 2,000 people are believed to be have been killed.

Then, there was also the homemade explosive that went off at the National Association for the Advancement of Colored People (NAACP) in Colorado Springs in the United States around the same time, although there were no reported injuries or deaths in this instance.

Nonetheless, all three — and I’m sure many more that have gone unreported or that we may have missed — all involved persons who intended or managed to cause harm to others, including death.

Motivations aside, I think most people can agree that violence is never the solution no matter what the offence is.

Maybe it’s the circle of people I surround myself with but I have yet to encounter anyone who believes the attacks were justified.

What I have heard a lot about, however, is debate on how the world has responded to the attacks.

Here, I am specifically referring to the Charlie Hebdo case which dominated global headlines.

Whether or not you are for #JeSuisCharlie or if you think that the world leaders who have marched alongside reported millions of people in France against “terrorism” are hypocrites, is moot.

The point is that everyone has their opinion and there has been a healthy — albeit heated — debates in the media, on social networks and in person.

I read when media practitioners took to their words and images to make their case, sharing what freedom of speech means to them, if there should be limits to this freedom and arguing on different sides as to the meaning of responsibility when it comes to what some dub as offensive material.

I have seen friends and acquaintances make their points from religious, secular and other perspectives on the variety of articles they have read or respond to opinions they have come across in the wake of this tragedy.

And I have had hushed conversations with people about the implications of such incidences, what they believe is the cause of it and where incidences like this leave mankind in negotiating our future.

I, too, have my own opinion.

In many of the cases I mentioned above, the discourse has been passionate — at times aggressive — but no one has opted to turn to firearms to make their point.

If I was to hazard a guess, this is because most of us understand that violence is rarely, if ever, the answer to any problem.

If anything, it is a reset button that takes us backwards in all the progress we have made collectively over the past years, decades and centuries.

Whatever we think of freedom of speech and expression, or the extent of such freedoms, I would like to think that the universal understanding is that discourse only serves to take mankind forward.

Which is why I also never advocate for archaic laws that stifle any freedoms, to be used against people whose opinions I disagree with.

This is because I don’t expect everyone to agree with me but I still want to be allowed to speak as I wish.

In fact, part of me relishes constructive disagreements because that kind of discourse can teach me new things which might change my opinion, or further strengthen what I already believe in.

It is through this practice that “urgh” has become a staple sound in my head, although sometimes it escapes my mouth.

Each time I hear someone say something I disagree with or think is offensive, I want to know why he or she is of that opinion.

So, I just go “urgh” and then read or listen on. This also helps me have a thicker skin so I am less offended by what some people may say.

I react similarly when I click on links to read numerous articles in the aftermath of the Charlie Hebdo shooting which from the headlines, comes across as something I’m unlikely to agree with.

In some instances, I have discovered something new. In others, it has made me reevaluate my stand on the issue.

My hope for all humanity is that others react in this way to the multitude of differing opinions which they might not necessary agree with, instead of turning to weapons or even legislation to silence anyone.

Niki believes that freedoms have to be available to everyone equally. Connect with him via www.tinyletter.com/nikicheong 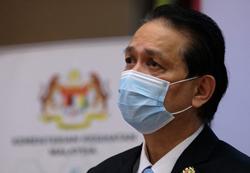